Last gen you couldn’t go a year without at least five Japanese RPGs coming out. However, these days they are quite rare. In fact this generation alone I’m sure you can count the number of JRPGs with your hands (if not just one). However we have gotten a few gems out of the genre this generation, and I have to say Lost Odyssey is one of the good ones. It can almost be said that Lost Odyssey is the true Final Fantasy XIII. Sure it lacks the innovation that Final Fantasy XIII brought to the table, but it the soul of the series. Something Lost Odyssey seems to have inherited. 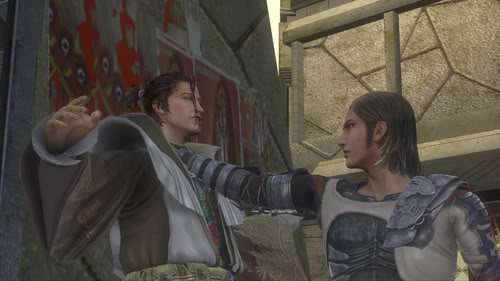 The story of Lost Odyssey takes place in an unnamed fantasy world that is in the middle of a magic-industrial revolution.  That meaning that it is somewhat on the steam punk side, but where it was steam or oil before it is magical energy. However it seems the world is constantly fighting between the three largest nations known as Uhra, Khent, and Numara. It is in the middle of a battle between Khen and Uhra that that we are introduced to the main character Kaim Argonar.  He is sent out, and while single handedly kicking a lot of the opposing side’s ass a giant meteor falls on the battle, and kills everyone but him. It is then that we discover that Kaim, like some of the other characters in the game, is a one thousand year-old immortal.  However like the others he has no memories beyond a few years back. Upon the Uhra government discovering that a giant tower known as Grand Staff caused the meteor. Kaim is unwillingly teamed up with Seth Balmore (one of the other immortals) and Jansen Friedh to find out what happened. It is from this quest that the main story unfolds over the four discs the game is on. 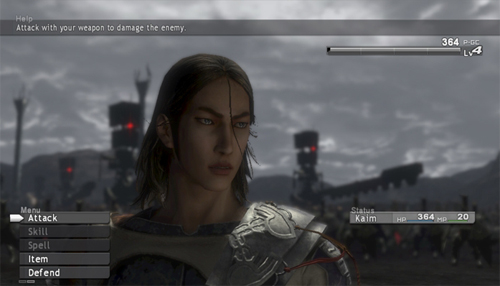 Lost Odyssey plays like just about every other turn based RPG you’ve probably have played before, and by that I mean it’s turn based.  However the game is unique in a few different ways. One of the first thing you will notice is that the immortal characters all can not die. Unless all characters are killed they will revive themselves after about three turns with a fraction of their health. However this comes at a cost. Immortals cannot learn abilities or magic on their own, or by leveling. They in fact learn them by being assigned to a certain character. After following them for a certain amount of time they can learn these abilities and spells. Another interesting play on this is that Immortals can take on the abilities of certain equipment, and then use them as skills. The result being an immortal that can use the most powerful spells, and absorb the damage from elemental attacks. Immortal or not all characters use the ring system. Which has a ring that closes as you hold the trigger till it matches the one around the enemy. Depending how you do it will effect the attacks proficiency, and how potent the effect the equipped ring is. The abilities of the rings depend on which of the many rings you either find or make are.  Rings can let you steal, cause elemental damage, or might just boost your attack power. 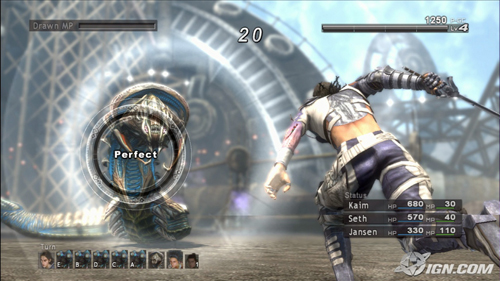 Where the game really excels is with the memories side quest. In this as you travel you will run across certain events that will trigger text based memories from the immortals. Though most of the memories belong to Kaim. I have to say right now that while many will probably think that this side quest may sound boring since they are only written stories. I say now that you’d be wrong to think so. These stories are some of the best, and quite honestly sad stories I have ever seen in a game. One of the early ones being about a girl who is born terminally ill that lives her whole life in her parent’s inn, and only knows the world based on the stories of those that visit the inn. The stories like the main story cover the themes of both life and death, but being that they are so short they seem to over power the player emotionally. Almost to put the player in the head of Kaim. 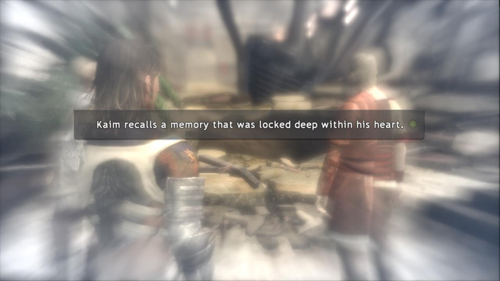 Where this game does really well is that it has a great soundtrack. A feat that is quite natural when the great Nobou Uematsu does it. Not to say it is his best, but with him the music always is great. One thing worth mentioning is that he created a very familiar sounding victory theme. The battle themes are always fun to hear, and each area has an interesting feel to it with the music. Is it worth getting the cd? No, not really, but it easily does the job, and might have some waiting for the next fight or boss battle to hear a song.

Over all the game is a lot of fun for fans of JRPs. It does have some frame rate problems, and loading times are pretty bad if you don’t install the game to the hard drive. However all that aside this is the best JRPG I have played on the Xbox 360 yet. I urge you to go and pick it up now!

This being a Respawn review I have to compare this to current games. That being the case I have to say it hold up well. The graphics are not as good as Final Fantasy XIII, but is still a fine looking game. The story is one that I think many will remember, and enjoy. As Final Fantasy fans will tell you no matter how old the games get their stories are timeless. Being that JRPGs are mostly about the story I can say that it is very much so the best story I’ve seen on the 360.

On an unrelated note I want to dedicate this review to my friend Jake that passed away before posting this review. I hope that you have found peace my friend. 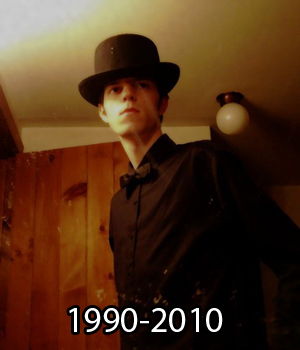