Retailer Pre-Order Bonuses For LoTR: War In The North Announced

We're pretty excited about the upcoming Lord Of The Rings game, War InThe North, an action RPG take on Middle Earth.  If you're also pining away for it like Smeagol does for the Precious, then you'll be happy to hear that there's not only a collector's edition, but also retailer-specific pre-order bonuses, and console-specific goodies! 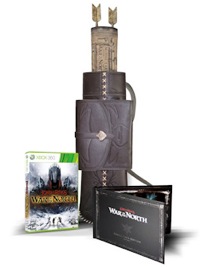 With your purchase of The Collector's Edition  ($130) you get various memorabilia. Included is a case shaped like "Ranger of the North Quiver", which you can use to hold the game, or strap to your back when LARPing.  You also get the obligatory Art Book and Making Of DVD.  The art book is a hardcover and relatively fancy.  The DVD includes several songs from the game's soundtrack.

Also included with your purchase is an X-Box live "Ranger of the North" Avatar costume.  Sub-human savages who buy this game for their Playstation 3 receive a theme pack instead.

Select retailers currently offer pre-order bonuses for your race choice.  If you like Elves, go with Best Buy where they will provide you with in-game Elvish armor, weapons and a Lothlorian Challenge map.  If you're into Dwarves, head to Walmart for the Dwarf pack.  Amazon has an Orcish sword and early access to the War In The North digital comic. Gamestop the place to go if you dig Humans. Target has the game's soundtrack. Toys 'R' Us has a poster (Signed by Jim Lee) and access to the Digital Comic. Unfortunately, neither purchase from Target or Toys 'R' Us comes with The Precious.