Return of the Originals: Battle for L.A. Review

A powerful novel that’s complemented by stunningly detailed pencils with a cast of characters that will remind you heroes of yester-years. Set in World War II this unique graphic novel will keep you entertained and guessing with every page.

Let’s dispel any notion that you need to know the characters presented in this graphic novel in order to enjoy the story. Also let’s dispel the notion that the characters are un-relatable due to their “Golden Age” history. This story is not only interesting and intense, but gives a new view into World War II through the eyes of superheroes. 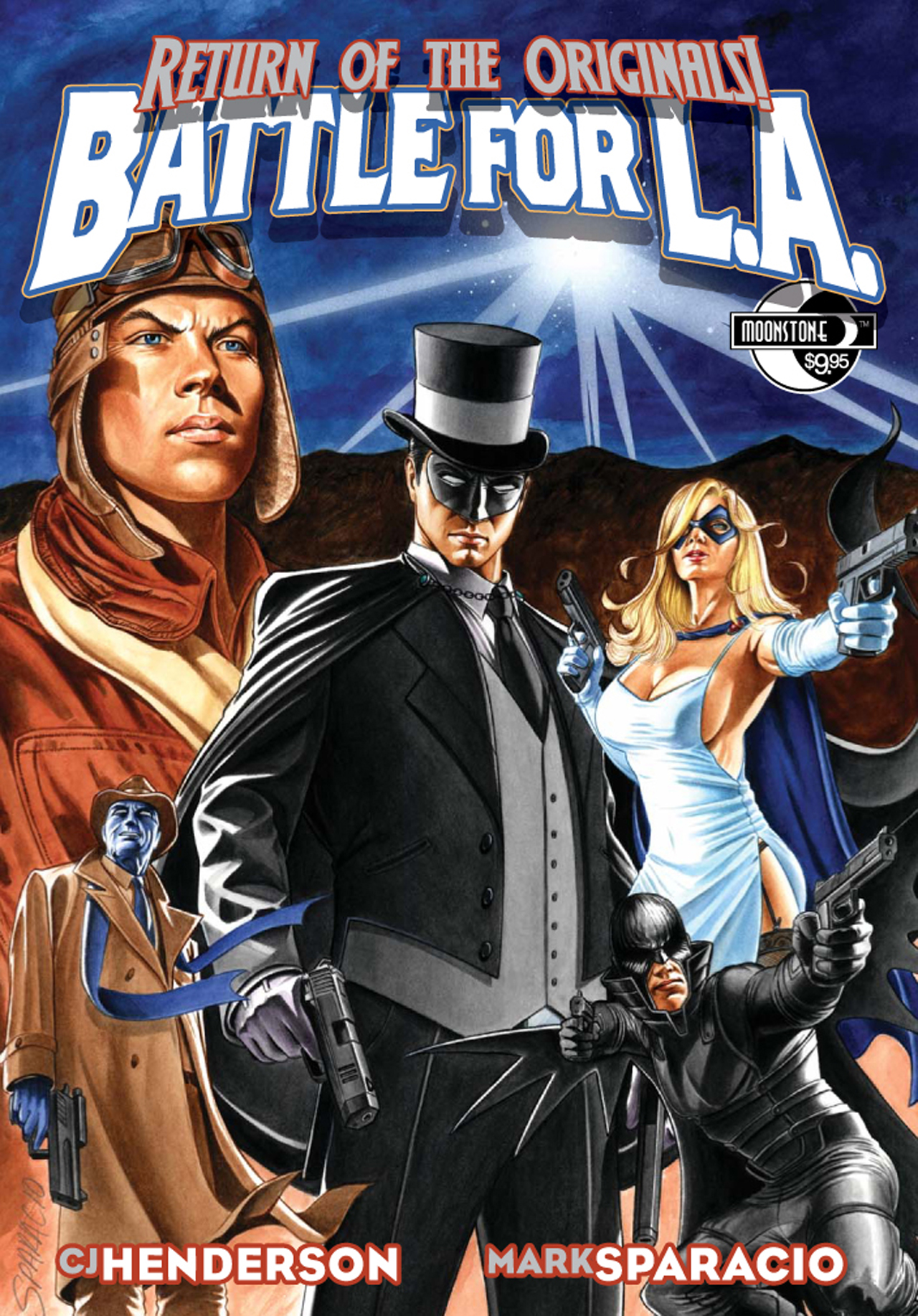 The story opens with Super Agent X running for his life as he tries to escape armed Japanese gangsters. Agent X’s cheek is seemingly hanging from his face, as he runs down city streets in the middle of the day. The gangsters open fire on Agent X with no regard for their surroundings, their mission is clear they need to kill him before he report anything he’s seen. Agent X narrowly escapes the gangsters by throwing himself into the Hudson river, but not before taking several bullets to the body.

Several days later Richard Curtis van Loan is awoken in his bed by a masked vigilante by the name of Black Bat. It seems that Richard’s secret identity Phantom Detective has been discovered by Black Bat who has come for his help. At first the two are very stand-offish as Phantom Detective obviously feels violated as someone has come to confront his alter-ego and that someone has managed to make it past all of his security devices. After some banter Bat convinces the Detective to get dressed for “work” and come with him to an undisclosed location.

The two arrive at a military base, with the Detective now dressed as an elderly Doctor. The Detective is also a master of disguise and refuses to break character for even a moment. Even when Bat takes off down the hall, it’s very noticeable to the guards on duty that the old man can’t keep up. Bat and the Detective are put in front of Agent X who is in a comma from his long swim in the Hudson. Black Bat finally breaks it down for the Detective explaining that they are in the dark about what happened to Agent X, but that they know whatever it is, is time sensitive and important to national security.

Bat and a later introduced General ask the Detective for help in picking up where Agent X’s case left off. After a series of scenes the two find themselves at the estate of a rich Japanese mobster. It’s a cold February winter night, but the Phantom Detective notices a third story window has been left open in the middle of the house. The two make their way up the house to the third story window. 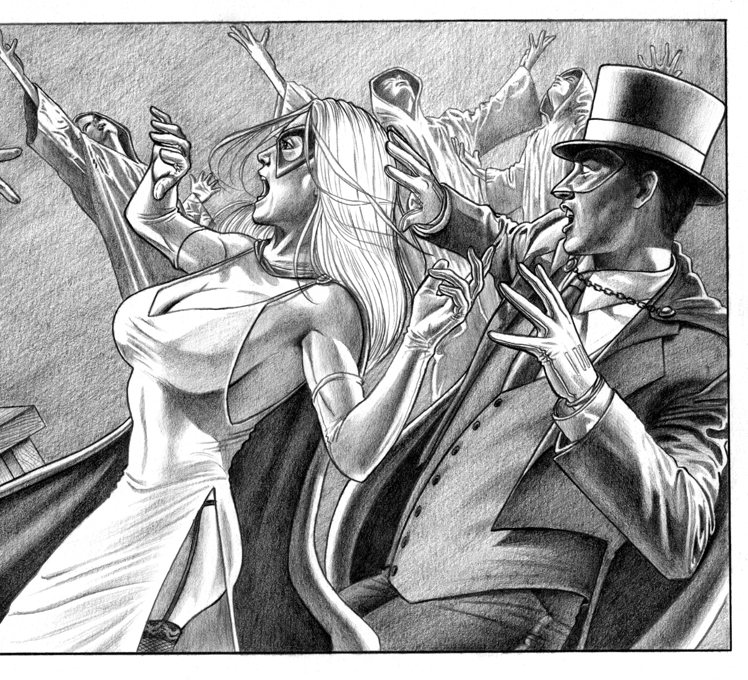 What they find inside is a mystery canister sitting in a bucket of ice. They stand for a moment scratching their heads and bantering back and forth trying to figure out what they’re looking at. Black Bat decides to explore the rest of the house and leaves the Detective alone with the object. The Phantom Detective picks over the object looking for any kind of marking to give away what the object is. The entire time he inspects the object he’s overcome with fear and dread. He becomes distracted as he hears shooting coming from lower level of the house.

In his time away the Black Bat has stumbled upon a room full of Japanese gangsters. He opens fire on the men as he jumps down at them. Just as he runs out of bullets the Phantom Detective arrives to lend a hand and a diversion. The Bat sets off a smoke bomb and makes his way back to the Detective. The two men then head back for the mystery canister to grab it and dash. Just as the Bat is about to grab it though the Detective pushes him out the window instead. As they jump out the room explodes and quickly ignites the rest of the house.

The two continue their journey to the west coast where they must now save L.A. from having an unknown terror released upon it. There they are teamed with World War I fighter pilot hero G-8 and longtime friend of Black Bat’s the Domino Lady. The only plan they have to go on is having Phantom Detective impersonate the deceased Crime Boss they killed in New York before anyone learns of his death and stop the Japanese before they can destroy L.A.

Obviously you’re not going to get the entire story in the review because then you wouldn’t buy the book. Frankly, I was really impressed with this graphic novel. I had no idea who the characters were, what their history was or what even the story was really about. I just had to dive into the book and trust that everything would be explained and everything was… brilliantly! 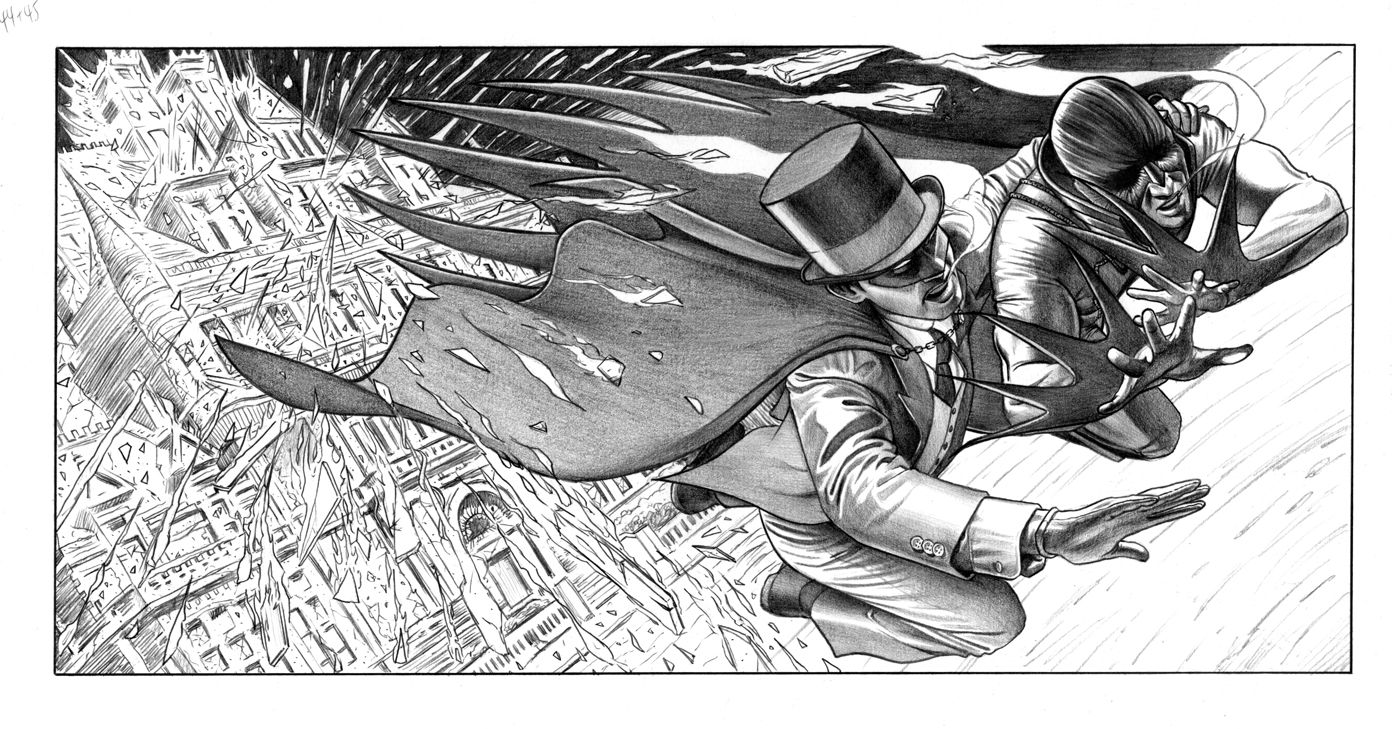 CJ Henderson does a fantastic job of not only introducing the characters, but also introducing the reader to their personalities. I have never read a graphic novel where half way through reading I already felt like I knew the characters and what they would do next. By the end of the novel you will find yourself wanting the next adventure from our heroes. In truth the graphic novel reads more like a weekly serial or even a radio program, which is an even bigger crime since you know their won’t be anything next week to enjoy.

The focus of the story really is the Black Bat and the Phantom Detective and Henderson nails these two characters very well. The banter between the two is spot on and witty the entire time. It’s great to actually read their friendship develop and grow throughout the story. Since the story is written in novel format, Henderson is able to tell the reader the character’s thoughts which are very important in building their personalities since it’s not being shown on the page.

The artwork that does compliment the story is amazingly detailed and incredibly beautiful. Because of the novel format the art that splashes across both pages usually is only depicting one scene, but it captures the scene perfectly and to the point where the words describing the actions aren’t nearly as good. Mark Sparacio (Jonah Hex, Captain Action Comics) is an amazing illustrator that adds detail upon detail to every page and really brings the characters to life.

If you’re looking for your run of the mill superhero story filled with tights and capes, then this is not the book for you. This is for that comic reader that has a diverse palette when it comes to comics. If you’ve enjoyed what Alex Ross did over at Dynamite Entertainment with Project Superpowers then you will definitely enjoy the Return of the Originals.

Update: If you're looking for more books like "Battle for L.A." then check out AllPulp.blogspot.com where this review has been featured as a guest review.