For a single issue finale, I’d probably put issue #60 of Brian K Vaughn’s at the top. Yorkick’s goodbye to Ampersand, the lost moment with 355 on the plane, and the truly prefect final shot as a farewell… there may be loose ends in the series, but, my god, does that issue do everything right.

For the longer goodbye, the final book of Neil Gaiman’s Sandman: The Wake does its elegant finale on a massively grand scale. If they ever get around to making a TV series or movie of Sandman, expect the same style of complaints we heard about the LOTR: Return of the King and its seemingly nonstop barrage of endings. But Gaiman knew exactly how to end his series, tying up the main story and having not one, but three codas about the end/what it all means. He created three one off issues to close the series out that had little to do with Morpheus…. Hob’s reflection on life and meeting with Death, the lost man and the cat in the desert, and the call back to an earlier legend all said allowed the series to say goodbye with grace, intelligence, and subtly.

Quick question…what do these two all time greats have in common?

William Shakespeare. The final phrase of Y, “Alas poor Yorick” was spoken by Hamlet and Gaiman’s last issue is, references, and is about The Tempest. Hey, if you’re going to steal from anyone…

So what’s the appropriate way to end an epic story woven from a fabric of indie music and Nintendo games? Honestly, I’ve spent 30 minutes during my time writing this trying to come up with a song that just is perfect for Scott Pilgrim’s underlying theme.

This is the short list I came up with (must be 1985 on, must be from a band that had some indie Cred at the time of the songs release)

Only in Dreams – Weezer

Last Night I dreamt that somebody loved me – The Smiths.

All flawed but reasonably solid choices, if I may say so myself. But, you know what absolute kills as a theme song for Mr. Pilgrim as he heads into his finest hour? “Wake up,” by Arcade Fire. It’s about growing up, the band, like Brian Lee O’Malley, is Canadian, and there is a bit about facing the reaper as he touches my hand?

Wouldn’t the reaper be Gideon? Aren’t Ramona and Scott’s hearts torn up by this whole process? Don’t they have to wake up from the subspace highways? I can’t find an exact song that encompasses lost loves, evil exes, and going to fight the battle of ones life, so I’ll stick with Arcade Fire. Post your suggestions in the comments or twitter them @radiofreedave 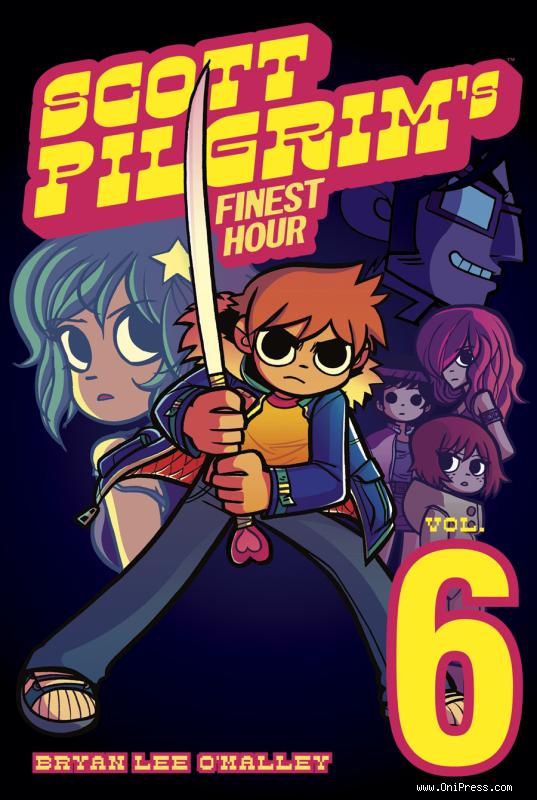 Back to the novel and the tale of the intrepid hero within. Even with all of the lauds and love O’Malley gets for this series, the way he closed Volume 5 is truly underappreciated. It’s one of the great cliffhangers in comic history (and the whole medium is almost nothing but cliffhangers). Ramona left (literally) after she worried about Scott being a bad guy. Gideon (Ramona’s cat) also left Scott. Scott had to leave his apartment, his band had broken up, he smashed his bass, and there was the lingering worry about the last of the evil exes. As the book ended, he was single, depressed, and living in a room paid for by his parents… but there was hope for the reader, as Gideon (Ramona’s last ex, not the cat named for him) swore his vengeance. If nothing else, the book promised a showdown.

And it’s a showdown we get in volume 6. But it’s not just Scott vs. Gideon (WHAT A DICK) that makes up the book. This is the tale of Scott overcoming his past; sometimes figuratively (with Knives and Kim) and other times literally (THE NEGASCOTT!!!).

Modern Western culture is used to the Joseph Campbell style of mythical hero who is fighting against all injustice and quantifiable evil in the world. Luke Skywalker, Superman, and Harry Potter are wonderful figures, but they aren’t truly relatable or realistic. While O’Malley’s Scott Pilgrim does have both everyman and superman qualities, it is key to realize that while may be without blame for the plot of exes against him, he is not a man without flaws. The themes O’Malley plays out about growing up, working hard, and correcting these flaws play out wonderfully here. His best execution of ethos and story comes in the way both Ramona and Scott  discover their own unique solution to defeat Gideon (I won’t spoil it). The whole thing plays out beautifully both as a comic narrative and as a tale of maturing into one’s 20’s.

The biggest gripe I have is that the final fight (while awesome) takes too much of the book, and that the actual dénouement and ending is relegated to a few pages. Even though the locations, battle, and dialogue of the final showdown are great, I, and likely most readers, was a bigger fan of the relationship between Ramona and Scott than I was of the fights between Scott and her exes. Maybe it’s hard to say goodbye, but I would have liked just a bit more time with the comic book versions of Scott and Ramona, who leave the western manga format they came from and enter the canon as one of the best couples ever created.

Should O’Malley have tried to rip off Shakespeare? I think he went with a nod with the next best thing… when it comes to the parting shot, maybe all you need is love. They fly off together as our beloved Scott just wants to hold her hand.

The Extra Life joke; wonderfully meta and a perfect example of how the series owned and adored it's roots. It took a bit of set up and the breach of the 4th wall, but it worked.

Knives and Scott’s reconciliation was horrible. For everyone. INCLUDING YOU.

Scott ordering a drink: “Give me something with ice in it. And Booze. Booze and ice, please.” Given Scott’s drinking style, it’s my vote for the best joke in the series. Even the noir-ish directional lighting gets me in this one.

The 8-bit Memory Cam. Every time O’Malley went to it in the book it killed. Even on the 14th reading, I laugh. Totes.

David is the host of playeraffnity's gaming podcast Digital High. He'll talk about the PSN Scott Pilgrim game on that show soon. Follow him on twitter @radiofreedave or ask him a question on formspring.me with the handle Radio Free Dave.