Let me start by saying that I’m a big fan of Ugly Americans the television show.  I’ve seen every episode from both seasons, and I absolutely love its quirky and often dark humor.  While the video game adaptation Ugly Americans: Apocalypsegeddon certainly has some of what makes the show so enjoyable, the lack of polish takes away from the experience.

I’ll save everyone the trouble of bringing up the less than stellar relationship between game adaptations of films/television shows and their original medium.  Those of you who spend even a moderate amount of time playing games usually know well enough to stay away from these abominations.  Ugly Americans: Apocalypsegeddon is by no means an abomination (unlike some of its characters), but there are enough problems with both the gameplay and the overall design that it comes perilously close.

Before I get to the gameplay, I want to emphasize that the animation in the cut scenes is pretty lackluster.  The characters’ mouths rarely move, their motions are herky-jerky, and it seems as if the characters were animated before the script was written rather than animated to fit an already finished script.  If you’re expecting animation that’s television-quality, then go watch the show.

When it comes to the gameplay, Ugly Americans is a simple dual-stick shooter that’s pretty entertaining, but lacks any real replay value. It's very easy to pick up and play and just as easy to master.  I finished all the achievements and maxed out all the content in a little less than 6 hours.  For 800 Microsoft points ($10), it’s a reasonable amount of content, but after you’re finished with it, the game doesn’t warrant continued play. 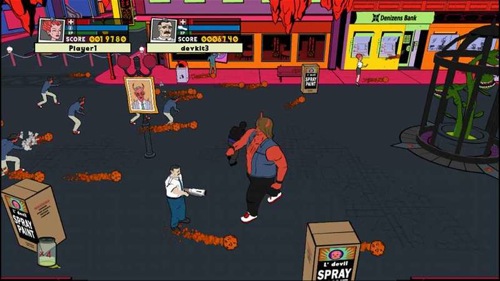 Apocalypsegeddon features 4 playable characters including the protagonist of the show Mark, his half-demon girlfriend Callie, his wizard co-worker Leonard, and his office’s security guard Grimes.  Sadly, my favorite character Randall, Mark’s zombie roommate, is inexplicably absent.  Each character has their own unique special move that causes massive damage and recharges gradually, as well as an affinity towards specific weapons from the wacky arsenal.  There is also an experience system in place with the max level being 60, and a variety of stats including strength, agility, health, and special damage.  Each character has a different max value for each stat, which is a good idea to differentiate the characters further, but in practice, it just creates imbalance.  Grimes is easily the most powerful character, since the more important stats such as strength and health are higher for him at the cost of less important stats such as agility and special power.  Leonard is by far the weakest, with Callie and Mark both being in between.

In addition to the shoddy animation, the graphics aren’t great.  The cel-shaded finish does little to mask copious amounts of pixilation, and the game appeared to overload when too many characters were on the screen at the same time.  Considering a lot of the appeal of the game is 4-player co-op (both local and over Xbox Live), this is a significant issue.

Speaking of the co-op, the fact that every player has to choose a character that hasn’t already been picked is a disappointment.  If someone in your party already picked Grimes, you can’t pick him too.  Since each character levels up separately, this is frustrating if your character is already chosen and you’re forced to start from scratch with another one. 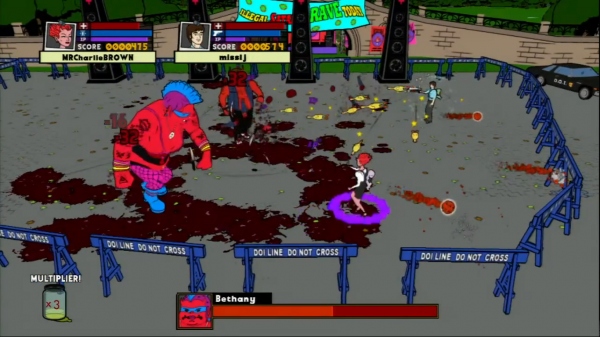 Perhaps the greatest strength of the game is its sound.  All the voice actors from the show are present, and if it weren’t for the generic script, their talent would have been much more appreciated.  Still, it was nice to sit through the cut scenes hearing the actual talent rather than imposters.  However, the sound design could have been better.  There are literally hordes of enemies throughout the 11 stages of the game, and each time an enemy appears, they utter some stock phrase that can get incredibly annoying after hearing for the 100th time.

Ugly Americans: Apocalypsegeddon has a few plusses amidst quite a few more minuses, but if you’re a fan of the show, it’s worth giving a try.  If you’ve never seen the show there are better and deeper dual-stick shooters on XBLA you could try instead.  A lot of the game is fan service, and if you’re not a fan, then stay about as far away from this as you would a cluster of angry manbirds.