The latest episode of Revolution, entitled “Ghosts” explored the concept of guilt and how it affects the choices and actions of the people living in this dystopian world. Sure, the idea of how events in the past can inform a person’s future decisions is a major theme of the series in general and will continue to be so, but it felt much more pronounced this episode. Especially when the two major storylines deal with the guilt a character suffers because of his or her past actions, and the consequences that arose from those choices. There certainly seemed to be more acutely focused on the strain and hardship that this guilt and culpability can have on a person and how that person deals with such matters.

We have seen this kind of storytelling through the entire run of the series. Tom Neville’s past as a meek, soft-spoken insurance agent drove him to become a ruthless militia soldier; Monroe’s sudden loss of his family and consequent abandonment issues have made him the tyrannical ruler and pathetic shell of a man he is in the present. There are many more scenarios of this kind introduced in previous installments. This episode, however, focuses on the particular feeling of remorse, specifically Miles’ and Rachel’s guiltiness and how they are confronted by it as they literally face people from their past. Even if they might not be ready or willing to take responsibility for their part in the creation of this new world they live in, they have no choice but to deal with it. 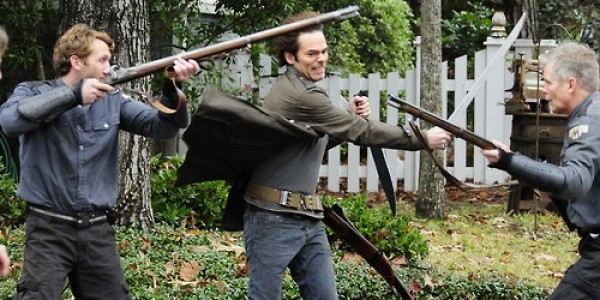 Miles is haunted by his guilt throughout the episode and on his quest to find ex-militia soldier, Jim Hudson, he clearly is having a hard time dealing with his past actions and his involvement in the militia. The show is never discreet when trying to communicate subtext, as he tries to convince Jim to join the rebellion it becomes more and more evident that he is convincing himself and is talking about his own experiences. “You can’t run from who you are, you cannot wash that blood off your hands,” he tells Jim, “sooner or later it’s gonna catch up to you.” Jim, like Miles once did, is running away from his past, and trying to establish a new life in this idyllic town. Having attempted to do the same thing, Miles knows very well that denial is not the way to go and that it is impossible to run from the truth. Miles almost bitterly joins the rebellion, because of his guilt over Danny’s death and his time in the militia, he knows he needs to pay for his offences. Perhaps he is not intellectually ready to face his inner turmoil, but he is more than willing to put himself in harm’s way to avenge his family and pay for his transgressions.

Rachel is not only dealing with the guilt she feels over Danny’s death, but also her involvement in the blackout, which put them all in this situation, as well as being absent for a significant part of her children’s upbringing. Charlie certainly does not make it easy for her mother, laying on some old fashioned guilt tripping on Rachel for basically being a nonexistent mother for the past decade or so (still a bit iffy on those dates). Charlie is moody and distant towards Rachel, and understandably so, she does have a right to feel angry towards her mother and Rachel having been taken out of the mommy loop for some time has difficulty reacting and dealing with her daughter’s grief. She hardly has time dealing with her own grief as her old boss, Randall, makes an appearance at the rebel camp.

Rachel showed some courage as she stayed behind while she destroyed the pendants, for once it seemed that her actions were not entirely selfish or self-preserving, instead she destroyed possible useful information in those hard drives for the greater good. Rachel finally is willing to give up some information about what she knows, after being seriously close to getting captured and her life threatened. The immediacy of danger and death, the very real consequences of Monroe or the wrong person having power have become real and tangible for Rachel and she realizes that it is time to unload the information she has, and Aaron is the perfect person for this conversation. Of course we won’t see the rest of this conversation till next week, because episodes apparently need to end on a cliffhanger every week. These two characters are strongly motivated by their past. The mistakes they made and their drive to right their wrongs is what keeps them going. 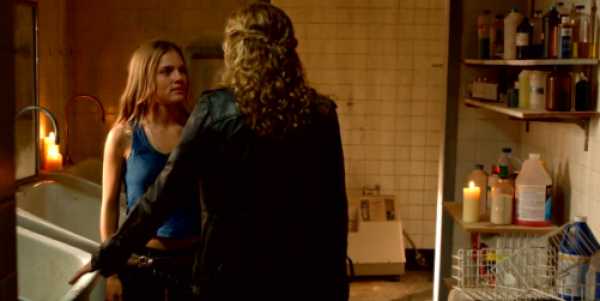 This latest episode also gives us a glimpse into the mysterious Randall, who up until now came across as a one-dimensional villain. That isn’t to say that his backstory is incredibly complex or fraught, (it is as expected and clichéd as they come) but kind of works. Randall Flynn, Assistant Secretary of the DOD, lost his son in Afghanistan, so the loving father deals with the tragedy of his son’s death by trying to rid the world of senseless violence, a noble cause if there ever was one. But, like every character in Revolution, Randall’s initial good intentions get thrown out of the window as his obsession grows. Randall is so adamant that they go forward with the technology the Mathesons have engineered (which we are still in the dark about) that he doesn’t care if sufficient trials and tests have been administered. His insistence and impatience literally cause the (most likely) international blackout that changed the world forever. We are led to believe that there was a malfunction in “the tower” and that it was probably the point of origin of the blackout.

In the present narrative, though, unlike Miles and Rachel, Randall does not seem to be wracked with guilt over his past actions. His past does haunt him, seemingly the memory of his son, and, like Miles and Rachel, informs his motivations, but in a very different way. There is no remorse evident in his demeanor, he believes that the world he created is the lesser of two evils and has no intentions to restore the power for all of humanity. “Look what people did with it last time, just killed each other… the way to protect the many is to put the power in the hands of the few,” he says to Rachel. Hasn’t he ever opened a history book? That scenario never ends well. His cool and confident persona is a good foil against Monroe, and while his end game still isn’t exactly clear, he makes for a decent villain. 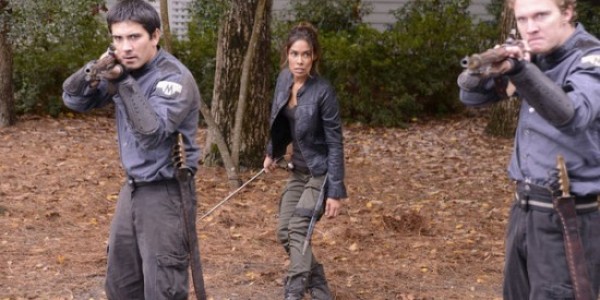 -- Rachel has no other response to Charlie’s resentment but to slap her daughter silly. This show always manages to make me laugh, not always for the right reasons or intended purposes, but I can’t say it is not mildly entertaining. If there is ONE thing we know about Rachel, it’s that she loves a good slapping; it is her go-to offensive move.

-- I like that Randall is not intimidated or afraid of Monroe. He thinks himself above the oppressive general and is manipulating him for his own purposes. But he might get too big for his britches because Monroe is not letting his guard down when it comes to Randall. He still doesn’t trust anyone.

-- It was quite convenient that the rebel camp be a hospital, but seriously. All those supplies lasted fifteen years untouched, hard to believe.

-- The flashbacks seem to be getting shorter as the season progresses, only showing the absolute essential and not lingering. I actually enjoyed the flashbacks during the first half of the season and thought that, at times, they were the most interesting part of the series. I know that there is more story to cover in this latter part of the season, but I still miss the longer flashbacks.

-- Charlie is still tolerable; she is employing some annoying teenager, moody qualities, but justifiably so. She is not in the best headspace at the moment, what with her brother being shot to death in front of her eyes. She is sufficiently badass when need be, did a good job with the crossbow this episode.

-- In fifteen whole years Randall couldn’t/didn’t assemble a team to help him gather the pendants?

-- Now that there are only ten pendants left, will missing the other two make it impossible to restore power? -- Rachel did say they needed to find them all, way back when. And there are twelve levels of something over at “the tower”. One pendant for every level? I’m guessing that the information stored in the destroyed pendants was crucial for power restoration, but its absence would just slow the process to regain power, not make it impossible, just more difficult.

-- Why did Charlie seem to aim at his feet when shooting at Randall? I know that he cannot die yet, for the narrative’s sake, but when you have a character shoot down a group of militia men, it makes no sense that an defenseless person would escape unscathed. They could have at least made a bullet graze him, not killing him but delivering an unexpected blow.