Giancarlo Esposito is a badass. “The Song Remains the Same” features Tom Neville much more than the two previous episodes of this part of the season and this episode was better because of it. There isn't any groundbreaking shift in narrative or style here, just more Neville, and the more opportunities we get to enjoy Esposito’s brilliant acting the better. The episode definitely pays more attention to Neville’s story; Monroe puts him to the test at the behest of Randall; the rebels react to his unexpected presence; and eventually he decides to flee Philadelphia with his wife. Almost every event or action that takes place in the episode is due to Neville’s initial actions and subsequent situation.

In an episode that so heavily features a particular character, it certainly pays off to have an extremely able performer to keep the audience engaged. Giancarlo Esposito totally nails the episode, playing every moment to near perfection, even when the writing isn't as strong as it could be. Revolution is no stranger to over the top, clichéd writing and only a skilled performer is able to improve weak dialogue with his or her performance. When Tracy Spiridakos has to utter such lines like, “We’re at war, Danny died fighting this war, we can’t get emotional,” it becomes grueling to watch the show. She is still very green and has a hard time being believably emotional in scenes without making it seem forced, especially when her scene partner is Elizabeth Mitchell who has had her share of experiences playing emotionally damaged women and can seriously act circles around her; Spiridakos also struggles also when the camera is really close, a camera trick that illustrates more of her strain and lack of ability. But Esposito manages to make a ridiculous conversation about Lionel Richie absolutely fantastic, and his physicality and delivery of the lines makes it plausible for Neville (who had just had a serious discussion with his wife and is paranoid about his job security) to have actually experienced that brief moment of levity. And of course Neville as a Richie fan makes complete sense.

The rest of the episode is much harder on Neville as he gets caught by the rebels and has to fight his way out of captivity. It is probably most entertaining watching Esposito become extremely antagonistic; he plays the role of the villain particularly well. He completely embraces the innate camp element of the role and the show itself. The show is, at the end of the day, a science fiction, pulpy action drama. David Lyons at times seems to be taking a similar approach to his antagonistic role as Bass Monroe, but his approach is still a bit unclear. There are times in which he seems to be taking it so seriously and earnestly that he is laughable. In this episode we see him literally twirling an imaginary moustache as he quietly broods in his office; seriously, go back and watch the episode and you’ll see that he does so with no hint of humor or self-awareness. 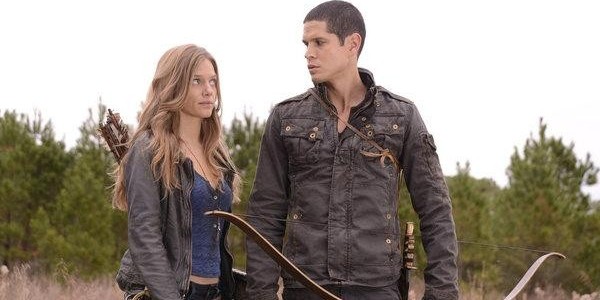 Esposito, on the other hand, seems aware of the absurdity of the nature of the show (not that that is a bad thing) and has fun with his character. In the scene in which he manages to escape, the look he gives the father right before he stands up is menacing and disturbing and incredibly over the top, but his commitment totally sells it. He is not afraid of going all the way with Neville to the point of looking like a madman, but his intensity works because he commits to it and convinces the audience that Neville has to be unbalanced. Also, when taking such extremes during the overtly villainous scenes, he is able to draw a huge contrast to those moments in which he does more emotional and sympathetic material and creates two opposing extremes, which is interesting to watch.

When Neville talks to Jason, his delivery is completely heartfelt, and at that moment we are supposed to believe him; either Neville is a good actor himself or he truly loves his son and is telling the truth. I think the writers intended his words to be true, and Jason’s rejection of his father’s emotional outpouring and the revelation of his true intentions caused Neville to feel completely betrayed and hurt, causing him to consider severing their relationship on a permanent basis. That moment of surprise, when we see Miles and the rebels standing at the other side of the door as Neville thinks he’s about to escape, was well executed by the writers and performers and was successful in being unexpected and startling. Will Jason regret his decision? He seems suspicious of Miles’ plan to help his mother, and we know that Miles is completely lying to appease Jason, will he continue to fight with the rebels as he realizes, like Miles said that, “no one’s a good guy”? There might be no “good guys” but the rebellion is surely the lesser of two (for the moment) evils.

As Neville makes his way out of Philadelphia with his wife, therefore escaping Monroe’s potential punishment, Rachel and Aaron embark on a journey to "the tower", which is located in the Plains Nation. Last week’s episode ended with Rachel beginning to divulge her secrets to Aaron, of course we miss the entire conversation, but we are presented with some important information concerning the blackout. We finally get to learn what is causing the blackout: tiny computers/nanobots, microscopic in size, permeate the atmosphere, and inhibit the production of electricity. Rachel and her team created this technology and made it so the “thingies” (we don’t have a name for them yet) would follow two commands: to absorb energy and to replicate it. But fifteen years ago something went wrong in ‘the tower’ and the “thingies” multiplied like crazy and took over the world. 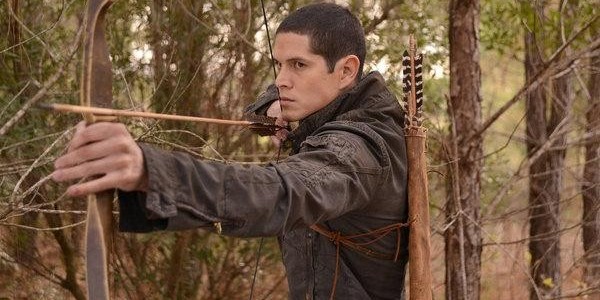 I’m glad they didn’t hold off even more on the big reveal because it felt a bit anti-climactic coming in the thirteenth episode. If this had been the big moment in the season finale, it would have been crushingly disappointing. At first glance, it seems like a pretty solid explanation and even rather plausible, but the longer one applies thought to it, the whole plot device kind of falls apart. If the "thingies" are multiplying in a rapid pace, wouldn’t they have taken over (physically) a significant part of the world (despite their small size) after fifteen years, or has the reproduction somehow ceased?

If they are currently stuck at the absorbing electricity command and they surround human beings, are breathed in by them, etc., what stops them from absorbing the naturally occurring electricity within human bodies and living creatures? Can a distinction be made between natural/organic electricity and manmade electricity? I’m sure there are more questions, but these were the most glaring and hopefully the show will have the opportunity and insight to address these issues with somewhat plausible answers. There is always an element of suspension of disbelief when watching science fiction programs, and audiences don’t necessarily mind giving in to insane ideas as long as they make sense within the fictitious universe they inhabit and viewers can see that there was some thought behind them. With any luck, we’ll get a semi-decent explanation. Also, we still have no idea about the device Rachel took out of Charlie and how that fits into the whole blackout dilemma.

The journey to "the tower" has caused yet another divide between Rachel and Charlie; the two had been making some major strides in rebuilding their relationship, only to have it fall apart. So Rachel has to leave again, and splitting the group works as a way to expand the universe as Rachel and Aaron head to the Plains Nation and the rest of the gang go into Georgia. However, there was probably some unnecessary melodrama with the whole “I won’t be back” thing. We know that they will eventually reunite, right? No one of any significance is going to die, at least not until the last few episodes. Just as there was no question that Rachel was not going to be able to get to Neville, regardless of her near sociopathic drive to kill him. Rachel is quite unhinged and was determined, but the rule of dramatic traps made it impossible for her to fulfill her objective. 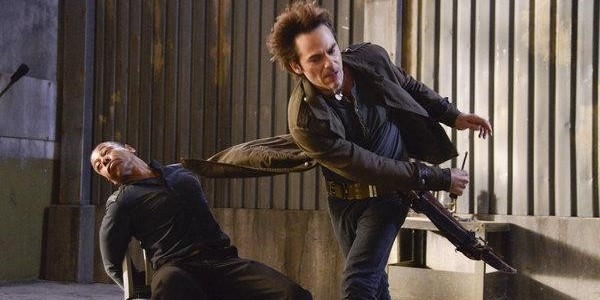 The success of this episode relied on a great performance and a focus on a compelling character. While the episode did spend a lot of time with Neville and followed him more prominently, the cast still felt like an ensemble. The group can shine as long as there is a strong enough feature to carry an episode. Much of the first half of the season felt too centered around Charlie; because the character is not that interesting, and Tracy Spiridakos’ performance is not as compelling, the episodes suffered.

While I still have my issues with the character and the portrayal, Charlie has improved significantly and will continue to do so if they continue to shift the focus. Actors Billy Burke and Elizabeth Mitchell have the necessary ability to lead the cast, and episodes focusing on these characters would be interesting because they are two of the most complicated characters in the series and they have huge gaps in their history that are missing and full of potential. While there are many questions up in the air, and many more will surely emerge as the series progresses, the show seems to be answering some questions at a decent pace. If the trend to focus on interesting characters and performers, like this episode did, continues, then the latter part of the season has a promising future.

Random Thoughts
-- Kim Raver is quickly becoming one of my favorite actors on the show, even if she is just a recurring actor. Her chemistry with Esposito is really great and I enjoyed her scenes very much. Julia is an interesting character; like Rachel, she is not the most likable or sympathetic character, but she is an interesting and compelling female character.

-- God forbid that Texas should get any power! Miles’ appalled reaction to that possibility was well played by Billy Burke, one of the few comic moments that were actually funny.

-- Ok, what we have seen recently is that the incident at "the tower" came at a surprise to everyone and that it was a malfunction, but back in the pilot Ben and Rachel were acting as if they knew exactly what was going to happen: that the lights would go out and cause an international catastrophe. Is this a gap in the narrative or a continuity issue?

-- Lots of Elizabeth Mitchell crying in this episode. Didn’t mind it much because she does it well.

-- The militia soldiers continue to suck at defending any type of building, holding down the fort, and eliminating rebels. They did kill three rebels this time, though, so a slight improvement from last week’s absolute fail.

-- Liked the incongruence of the world of the rebels to Julia’s plushy Philadelphia digs. They have time to have tea parties in the capital. I almost though it was a flashback, it looked so perfect and the women so put together.

-- Was this the first episode to not have any flashbacks? Although I though it was an improvement from what we have previously seen, I missed the occasional flashback here and there. I kept waiting for them and expecting them to appear, but they didn’t.

-- Rachel and Miles make out, finally giving in to the severe case of sexual tension present between them since the slap heard 'round the world. Their history is interesting and I am intrigued by what exactly their past holds. Did they have an affair before or after the black out? Was their attraction to each other something both of them just suppressed until now?