Revolution – The Stand Review: For the Greater Good

If you haven’t seen the midseason premiere of Revolution and don’t want to be spoiled you should probably stop reading, watch the episode, and then proceed with this review. Ok, lets get the big spoilery part out of the way first because I though it was a pretty hilarious/great move on the writers part. After spending the entire first half of the season, ten whole episodes, on a sometimes dull and always grueling quest to Philadelphia to free Danny from Monroe’s clutches, the writers kill him off, sacrificing him to the gods of narrative contrivances.

This latest development definitely makes one question the necessity of much of what we saw on those first ten episodes. Why did we have to witness the tedious journey to Philadelphia, why did it take so long? Was it worth it to have such an emphasis on saving Danny if they were just going to kill him off in the next episode? It's somewhat darkly comic that characters who have dedicated so much time and effort into saving Danny, eventually get karmic-ly screwed. 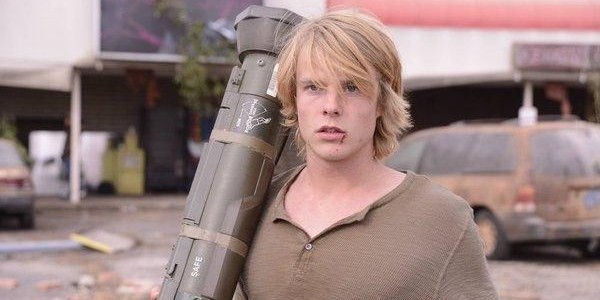 It certainly shows that the writers aren’t afraid of pissing a few people off and they are really adamant about the vulnerability of the characters in this world. It is not an easy thing to stay unharmed, especially if you are actively fighting in a rebellion against the established government. This does communicate the very real danger and risk the characters find themselves in. Plus, it gets rid of one Matheson kid. At least the writers listened to some of the viewer complaints about the Matheson children, so killing off Danny does raise the stakes for the characters that remain, as well as removes one of the most uninteresting and bland characters in the ensemble. Danny was never a very compelling character and wasn’t given much to do those first ten episodes, so while his death will seriously affect the rest of the characters (particularly Charlie and Rachel), it doesn’t deeply affect the series as a whole. It simply heightens the threat of danger and emotionally distresses other characters. His death served the greater good, both in terms of narrative (the helicopters are destroyed along with Monroe’s amplifier) and for the show in itself (we are rid of an unpopular character).

Danny’s (un)fortunate death also gave way to one of the most intriguing, and disturbing scenes we have seen on the show. In the closing scene we see Rachel mourning over her son’s body as (so far, conventional dramatic melodrama, but…) she proceeds to literally cut her son’s dead body open and pry a light-blinking device out of his innards. Now, we are to assume that this device has something to do with the mysterious procedure Danny had when he was a toddler, but what is it? Lots of questions arise from this little gizmo, most notably is: how is it powered? Rachel didn’t have the pendant with her when she cut her son open, so we can safely assume that whatever it is that shut down the power, didn’t have any effect on this device and that it has been blinking away inside Danny for the powerless fifteen years. Something tells me that this is not necessarily a medical/life saving device or procedure. The writers were very careful not to use any medical terminology or jargon or even allude to a specific illness or syndrome; instead the language was very vague. Rachel mentions that Danny isn’t a “science project” implying a more sinister reason behind the procedure, and Ben’s stoic, almost unfeeling demeanor gave the whole scene an unsettling vibe. We know Danny struggled with asthma and suffered from a birth defect, so the device could have a significant medical purpose, but we can never be sure.

Rachel definitely has some splainin’ to do, seriously. It is a little inconceivable that Rachel has managed to evade all the questions fired her way without much protest from the rest of the group. I appreciated Aaron’s mild indignation at Rachel’s resistance; again he is the voice of the audience, the stand-in for our point of views. He asks the obvious questions and wants to comprehend the situation he finds himself in. Hearing Rachel’s lame excuses for not explaining was increasingly frustrating and you could just see the hand of the writers manipulating the character’s actions. Now, there has been a lot of talk about the potential changes or shifts the show will go through in the second half of the season. Eric Kripke, the show’s creator, has stated that the hiatus was taken as a period of evaluation and assessment; the writers examined what was working, what wasn’t and supposedly made the pertinent changes. Those viewers expecting a noticeable change in this midseason premiere will surely be disappointed. The show is very much the same show that was airing in the fall. I believe that the first two episodes of half of the season were already filmed by the time the hiatus took effect so an apparent shift cannot be expected so early on. The changes coming will probably be felt around episode thirteen in which (it has been discussed) the secret behind the blackout will be revealed. Till then I will attempt to keep my patience when discussing the program and its misgivings, of which there are plenty.

One slight change that was felt in this episode was a focus on the ensemble; the first half of the series was very Charlie-centric much to the annoyance of many viewers. Tracy Spiridakos was not as bothersome as she had been in the first half, simply because she was not in the episode as much. If this is any indication for the future of the show then it is welcome. Hopefully this is a response to some of the viewer gripe about Charlie and the actress’ lackluster performance. It does take time sometimes to ease into a character and a new project so with any luck she will be able to develop a feel for the character that is more appealing. 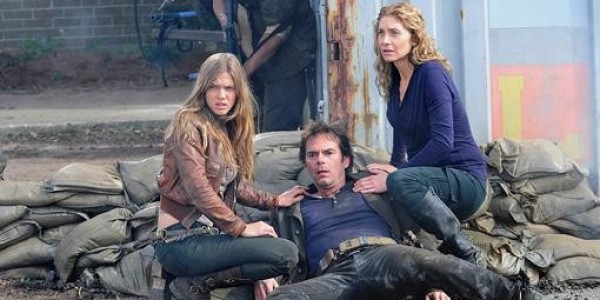 It is still difficult to care about the characters in this world, after eleven episodes they still feel like models or templates of characters and character development is lacking. The setting and mysteries brought up are intriguing, but if you don’t care about the characters involved, then the premise begins to lose its intrigue and eventually will not be enough to sustain an audience. I find myself invested in the some characters only because of the actors who portray them, there is a lingering affection from some actors’ previous work that keeps me watching. Ultimately, an actor’s performance is not enough to produce a well done, entertaining series. So far, the show has managed to give just enough to keep up audience intrigue; it has become an adequate genre program, but hasn’t broken out of its mediocre lull.

-- That was a pretty lame way to escape the helicopter. We wait four months to see how the group could ever escape such a threat to just have them run for it and hide in a cupboard/freezer, it was extremely anti-climactic.

-- How long does it take to walk from Westchester to Annapolis? I’m sure it takes longer than just a few hours; the sense of time in the show is completely off. There is no sense of a passage of time from one scene to another. It is never clear how long it takes the characters to get from one place to another and it ends up feeling too immediate.

-- Rachel and Miles’ cryptic relationship seems to hint at a romantic past, but it is not entirely clear, there is obvious sexual tension and since nobody on the show knows how to communicate like functioning human beings then I bet it will be a while till we get more details into their past. At least we know that Miles thought that Rachel was dead when he defected instead of just leaving her behind, redeeming him a bit.

-- Tom Neville is becoming a more fearsome villain than Monroe. While Monroe seems stubbornly obsessed with his quest for power and control, Neville seems to be a much more potentially threatening enemy. He has shown to be incredibly ruthless and unfeeling, even towards his own son. We might have seen a bit of weakness in him when he let Miles go in exchange for his wife’s safety (back in the winter finale), but since Monroe berated him for his misstep he has definitely hardened and is willing to go to extremes for the good of the Republic. He essentially exiles his son and later reports that he is dead; he compromises his loyalty to his own son, while Monroe couldn’t even kill Miles. Monroe has transformed into this brutal leader because of his past, his family taken away from him, everyone he has loved has been taken or left against hi wishes, Neville is making choices that push away the people that make him human. It will be interesting to see how this pans out, if he begins to feel remorse over his actions, or if we see him interact with his wife.

-- That sonic canon thingy that John had totally reminded me of the sonic fence in Lost, I’ve seen Elizabeth Mitchell clutch her head like that before.

-- The lighthearted scenes with John were amusing enough, his little quip about his “hobby” was nice, a little bit of comedy is needed to break some of the tension.

-- It is good to see Rachel react to Danny’s death and see her feel remorse and regret for what she has done. So often she is so unemotional that it is difficult to feel for her. She definitely needs to take responsibility for her role in this mess and seems to be doing just that.

-- So Randall Flynn is our big bad, Monroe is just going to be a pawn that he will use to get to Rachel and later toss away. A lot of mythology revealed about him and the great power conspiracy. What is the ‘tower’? Why is level twelve so important? His ulterior motive is unknown to us but is definitely intriguing.