Ahoy there Playarrr Affinity readers!  This week we got our hooks on the upcomin’ pirate game Risen 2: Dark Waters.  So tighten yer mainsails as we be explorin’ this swashbucklin’ high-seas adventure!

If ye didn’t play the first Risen game, it be a pirate-themed action RPG where the Player be controllin’ a Nameless Hero who fought elemental Gods called Titans.  Players could choose to join several factions, some bein’ pirates, others bein' the law-enforcin’ Inquisition.  While the Nameless Hero managed to defeat the Titan of fire at the end o’ the first game, by the starrrt of the second game, the world be gone ta ruin.  Them Titans have laid waste to the works o’ Man and not even the Inquisition can hold them off.

The Nameless Hero now sports a proper pirate eyepatch, and has developed a right manly love of grog!  Ye’ll be encounterin’ characters from the previous game, but even if ye never played the first one, ye’ll still figure things out right quick, ye will.  One look at the saucy pirate wench Patty and ye’ll know all there is to know about her.  By which I mean she be the bonny wench ye’ll be tryin’ ta plunder fer the rest of the game.

Your leg won’t be the only peg in yer pantaloons! 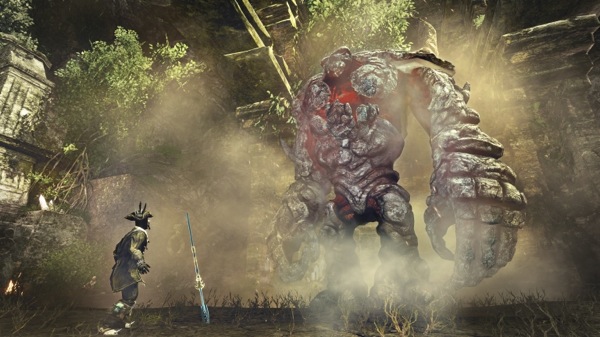 The pirate-ness in Risen 2 is authentic.  Dialog is written in sea-farin jargon with plenty of colorful genre flair, laddie!  Even the interface is piratical; ye’ll be having Blood, and Glory instead of Hit Points and XP.  An’ you don’t have a pansy “Magic” skill, ye have a Voodoo Skill like a citizen of the Carribean outta!

The Nameless Hero be on a quest ta find the one weapon that can fight the Titans and make the seas safe again.  Ta do so, he has to assemble a crew of scalawags and make his way through Action RPG quests.  Dialog is often very funny, and most quests give ye multiple way ta resolve reach yer goals.  Ye can try to fight, talk, or sneak yer way through most of ‘em depending on which skills ye level up.

In early levels the levelin’ progress be slow as trying ta sail up Satan’s arse when he’s breaking wind!  And that be mighty slow.  If ye just follow the main quest, ye can be stuck as a level 1 pirate for over an hour.  Ye can level up basic attributes as soon as ye have enough Glory, but ye have ta pay fer trainin’ ta learn or improve skills.  Learnin’ any new skill also requires a trainer and ye can’t learn the skill ye want unless thar be someone handy ta teach it to ye. 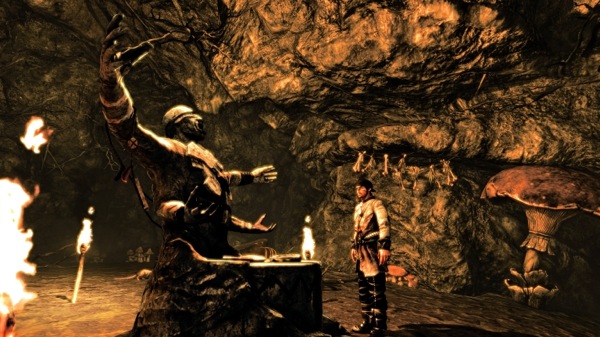 Sword fightin’ be a bit too simple.  Ye mash yer mouse to attack, and hold down the right mouse button to parry.  It be takin’ a long time before it gets more complicated than that, and new special attacks be costly!  Risen 2 be addin’ firearms to the works, so now ye can blast scalwags with yer musket when ye aren’t guttin’ ‘em with yer cutlass.  Firearms be havin’ a long cooldown period, so ye best make yer shots count!

Know that this game ain’t fer youngsters.  Thar be grown-up language and sailor talk for sure.  And thar be booze, drugs, and relations with unsavory wenches too.

Risen 2 be a slow boil, just like a batch of rum.  We only had access to the first few hours o’ the game, but it shows signs that it’ll be payin’ off for Action RPG fans who put in the work ta build up their Nameless Hero.  Fans of all things piratical can try out the series with the first game on Xbox 360 and PC in the meantime.  Risen 2 be comin’out April 24th for PC, Xbox and PS3.  Ye best check back here fer our review or we’ll keelhaul the lot of ye!