The Road Home ends in this issue! As Ra’s Al Ghul decides to get the assassination job done himself Vicki Vale might just die! While Vicki knows the identities of members of Bruce’s family, she is willing to release this news to the public. Ra’s would be doing Bruce a big favor. However, because he’s a hero Bruce will have to battle Ra’s Al Ghul and defeat him so that Vicki may live. This is the final destination in the long road that Bruce Wayne has paved; the next events will be even greater! Written by Fabian Nicieza artwork by Scott McDaniel and inks by Andy Owens.

Ra’s Al Ghul is struggling with memory lost and Vicki Vale burns her evidence that connects Bruce and other family members to crime fighters in Gotham. Ra’s Al Ghul is extremely pale or purple in this comic. 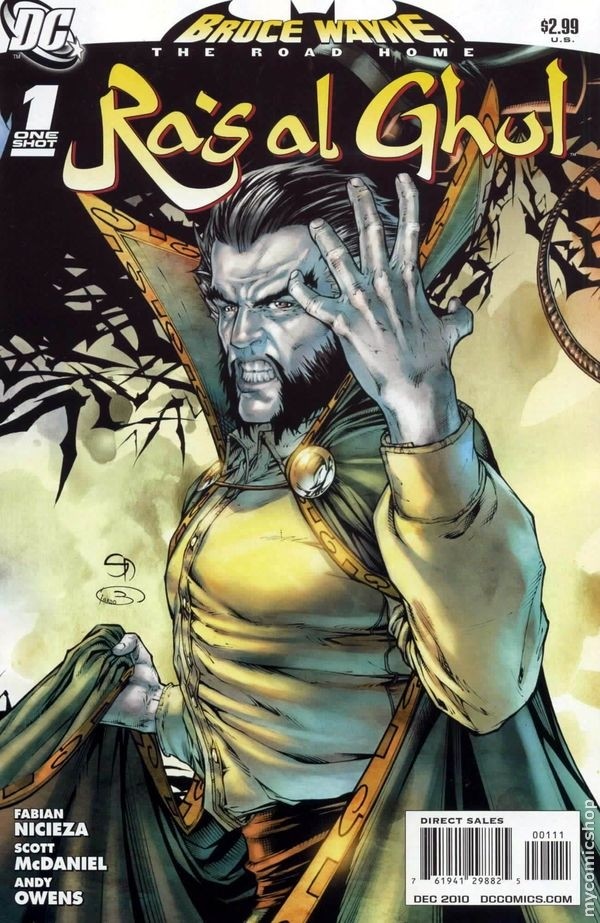 As this last Road home issue might be Vicki Vale’s last, Bruce Wayne swoops in and saves the day! Ra’s Al Ghul is trying to help Bruce’s legacy by silencing Vicki Vale’s big mouth... permanently! While this might be helping the Bat-family, Bruce (and friends) won’t let it happen. So as this is the final issue of Road Home, writer Fabian Nicieza finishes this story with a bang! As he was the first to work on Batman & Robin in Road Home, he has done a superb job at writing the couple of issues he worked on. I can see that his writing getting better and better with every story that he writes. He only has a limited amount of story material since the next stories are being released I think he still did a good job. I saw that Fabian Nicieza displayed Ra’s Al Ghul as a man that might be immortal, however is becoming forgetful. I guess time does that to someone that has lived over 800 years, but who would really remember 800 years (and over) material of memory? I liked how Ra’s Al Ghul played into the story really well and how he will be challenging Bruce once again in the future.

This issue was mostly about Ra’s Al Ghul, Bruce Wayne, and Vicki Vale, everyone else who participated was either a police officer or an officer of Ra’s. Anyway, the story played through as most readers (and me) figured it would. Vicki Vale burns her wall that connects the identities of Bruce’s friends and family to crime fighters in Gotham, and Vicki will leave Gotham City (preferably forever). However, it looks like Vicki will be playing a larger role in the Bat-family’s career, as she becomes the Lois Lane they never really wanted.

Fabian Nicieza (Batman, Red Robin) is finally finished with being one of the many writers whom worked on Road Home! While this story arc was only eight issues, and prepared Bruce Wayne for the events to come in Batman Incorporated, it was still great to see the combined talents of many famous artist and writers in one jam-packed story. While it seems that Fabian gets to become a better writer in every story he writes, I can see that Red Robin will be a great comic book series that he’s sticking with. Scott McDaniel (Green Arrow) artwork is okay in this issue, however I think it’s the colors that threw me off. He’s a great artist, however his Ra’s Al Ghul looked a little strange to me. I think it’s the colors that just made Ra’s look like an alien!

The Road home’s last road is finally paved and done! This last issue leads to Bruce’s new adventures in Batman Incorporated. So with this final issue pick up the series or just wait for the hardcover of this story in a month or so.