"This makes the 1991 Kevin Costner version look like a masterpiece"
By: Russ Matthews | Movie Reviews | November 26, 2018
The Lord of Loxley has been a mainstay since cinema began in different forms and he has been portrayed with varying levels of success by Erol Flynn, Kevin Costner and Russell Crowe. The thief with a penchant for the redistribution of wealth in Nottingham has a multitude of opportunities to give audiences a glimpse into the past and even to be a reflection of modern society. When Otto Bathurst was asked about the issues with the historical and accent inaccuracies of this version, the director stated, “We’re creating a metaphor, a spectacle, a fantastical thrilling world you’re thrown into…. and we painted Nottingham as this cultural metropolis.”  [caption id="attachment_104284" align="aligncenter" width="600"] 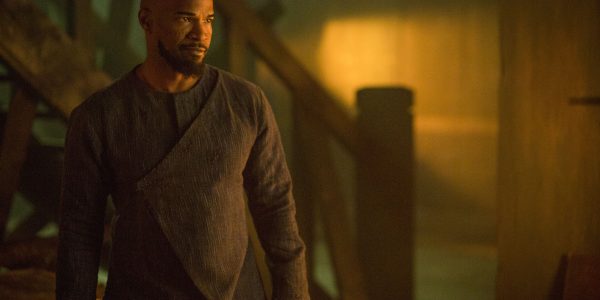 Jamie Foxx stars as ‘Little John’ in ROBIN HOOD. Photo by: Attila Szvacsek.[/caption] The story has many of the elements that will be familiar to fans of the merry men of Sherwood Forest. Robin of Loxley (Taron Egerton) is a Lord in the land of Nottingham, England who is sent off to the Crusades by the Sheriff of Nottingham (Ben Mendelsohn). Leaving behind his wealth, responsibility and the love of his life, Marian (Eve Hewson), he does his best to fight for king and country in Arabia. Upon his return to England, he finds that all he left behind has been taken from him by the political and religious figures in the community including his love and his reputation.  While he tries to get his bearings, Robin comes to the realisation that a Muslim commander had followed him from the battleground of Arabia, because of mercy that the young crusader had shown him and his family. John (Jamie Foxx) strives to direct the young Lord to channel his anger and frustration into a means of turning the evil of the Sheriff and the church leaders to a positive force. Through extensive training, the two men manage to undermine the fortunes and the plans of the leaders of Nottingham and hope to restore the hope of the people.  [caption id="attachment_104285" align="aligncenter" width="600"] 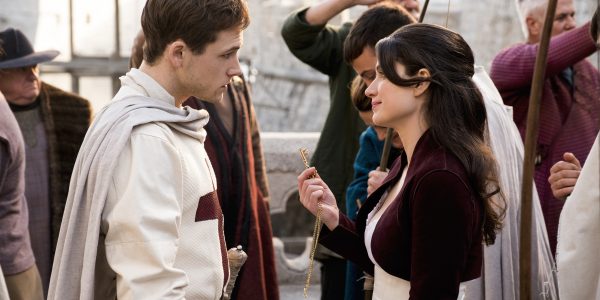 Robin (Taron Egerton) and Marian (Eve Hewson) in ROBIN HOOD. Photo by: Larry Horricks.[/caption] The familiar tale from history encompasses many of the critical themes of justice, bringing down evil leaders and the power of love, but this is not the Robin Hood of the past. Otto Bathurst overlays this battle for Nottingham with modern storylines, contemporary views of politics and religion and a stylish look and feel that becomes distracting and fails to complement the film.  The defining element of this film is the action sequences that are sourced from great modern warfare and heist films. The stunts and effects are stunning at times, but each segment is so out of place in this story that has a particular time in history. From horses outracing molten metal, to the underground theft of a treasury caravan to the rapid-fire crossbows of Arabia as examples, what would have been an entertaining aspect of the film becomes a distraction.  [caption id="attachment_104283" align="aligncenter" width="600"] 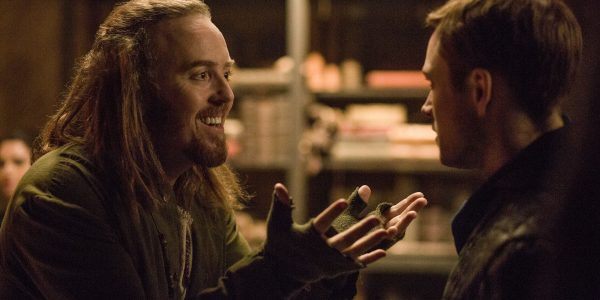 Tuck (Tim Minchin, left) and Robin (Taron Egerton, right) in ROBIN HOOD. Photo by: Attila Szvacsek.[/caption] The most bewildering aspect of the film is how award-winning talent could have signed on for this misguided adventure. From Jamie Foxx to F. Murray Abraham to Ben Mendelsohn, it is mind-boggling that such talented actors would consider this as a good option for their careers. The writing, the historical inaccuracies and costuming fail this project. Then to add the modern spins of politics and religion, it causes this to go from bewildering to ridiculous. This Robin Hood fails to hit its mark, except if you attend a screening the Hood would have been able to steal two hours of your life as well as your money.
Rating
2.0
Pros