Dynamite Entertainment's Robocop #4 is the conclusion to the first story arc of the Robocop series.  In issue four we see that Murphy has already been synced to the machine that will restore his memories.  As soon as Murphy is hooked up he’s greeted by the recently deceased Dick Jones.  Murphy is confused with what is going on, until he realizes that he sees the old man that ran OCP.   The old man has an offer for Murphy.  He offers him a chance at being human, in exchange for his body.  There is a catch though, the body that the old man is offering, is his own.  Murphy has to make a decision whether or not to be human or a machine.

While all that is happening between the old man and Murphy, Mason Volger is currently fighting for his life against a brand new weapon from OCP the ED-309.  That’s right; Odenkirk and OCP were setting up Volger to be killed. His death would show Old Detroit and the rest of the world what a city ran by OCP looks like.  Volger and his men are being slaughter, the remaining members try to convince Volger that he should flee to fight another day.  Volger, being the ultra macho man decides that fleeing is not the answer.  He charges the 309’s and in a blaze of glory takes two of them out before becoming a Martyr. 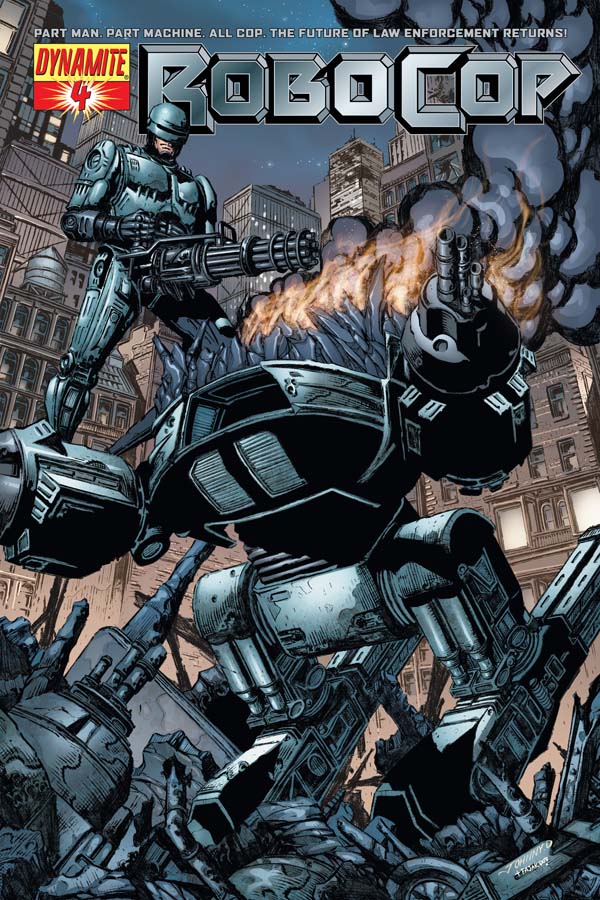 Meanwhile, Moss is trying to get back to his office and publish the story of a lifetime.  There is one problem; OCP closed down the newspaper office to prevent from anyone but them from informing the world of the events of Old Detroit. With nowhere else to go, Moss decides to get from the only people he knew would listen… The Cops.

Robocop number four is a weaker book than the first three issues in this arc.  The book has some nice surprises, but the story telling felt rushed and fragmented in this issue.  The way the results came into the issue were almost coincidental and as if each situation fell from the sky one by one.  However, the book does deliver in the “oh yeah moments”. At the beginning of the book the reader is greeted by Dick Jones that was great.  It was good because Dick had died in first movie and the events of this book take place only months after the first Robocop movie.   Also, the Louis moment that was almost as great as the first movie. The art in this book was awesome throughout the entire arc. Fabiano Neves (Red Sonja) did a great job at portraying the characters in the book to the ones from the original movie. Hopefully they keep him around for the next arc because his style matches the series perfectly.

Even though Robocop number #4 is a bit of brief conclusion to the first arc. Robbie Williams wrote a great story.  The arc over all had: surprises, good descriptions of the character, and most importantly it made Robocop human.  It showed Murphy’s human side beneath all the machine and programming that has been put on him from OCP.  The art also helped give it that ‘first movie” feel and the fact that Neves uses the likeness of the actors made the book more enjoyable.   The Robocop series is off to great start.   Let see what Dynamite does with the rest of this series.

What are your prime directives?  Review comics, protect the public, and uphold the comic book code, and follow Neil on Twitter.