Rock Band: The Original Band In A Box

On April 2nd, the ending of an era took place as the music video game, Rock Band, released its final downloadable track after 281 consecutive weeks of purchasable online content. Rather fittingly, the Rock Band creators Harmonix decided that the final ever song to be released for the game would be Don McLean's classic farewell tribute, “American Pie,” marking a definitive goodbye to five years of computer generated strumming, banging, and wailing. Of course Rock Band isn't dead as you can still find plenty of people buying the games and purchasing the peripheral ‘instruments,’ but Harmonix decision to leave Rock Band behind does mark the end of a once flourishing franchise.


So, that's how Rock Band ends (for now at least…Hamonix are rumoured to be working on something for the next breed of consoles), but how did it all start? Well to see that we need to take a trip down memory lane…


It was the year 2005 when George W. Bush was president, Disneyland turned half a century, and Hurricane Katrina ripped apart thousands of lives. It was also the year that a little game named Guitar Hero made its first debut. Modelled on the Japanese video game, GuitarFreaks, Harmonix collaborated with RedOctane (who designed the GuitarFreaks hardware and apparently approached Harmonix) on the western title, in the hope that they could recreate the success and popularity of its Japanese predecessor.

Their wish was duly granted. Upon its release in November 2005, Guitar Hero not only gained widespread popularity among gamers, but among critics too. It was a triumph and it led to further sequels between the two, which were again thoroughly applauded. However, the love between these companies was short-lived as two different and equally larger scales of fish acquired both Harmonix and RedOctane: Activision the latter and MTV Networks the former.


Whether Rock Band would have been formed would this not have happened, we will never know, but in 2007 the first game in the series was released, having being developed by Harmonix and published by MTV Games. Much like Guitar Hero, the game was met with critical smiles and headbangs of gamer approval but unlike the aforementioned title, the first Rock Band game had bigger cultural impacts and more toys to play with.


You see, for Rock Band it wasn't just about the guitar. Instead they focused on the idea of a whole band experience by adding drums, a microphone and a bass (another piece of guitar hardware but for an essentially different use) to the usual set up. Now you could pretend to be Keith Moon, Joey Ramone, Jimmy Page and Cliff Burton, dependant solely on your mood and not your peripherals. Thus the game was branded a real party game: you and your friends could actually provide the music, even if no one wanted to hear you sing. 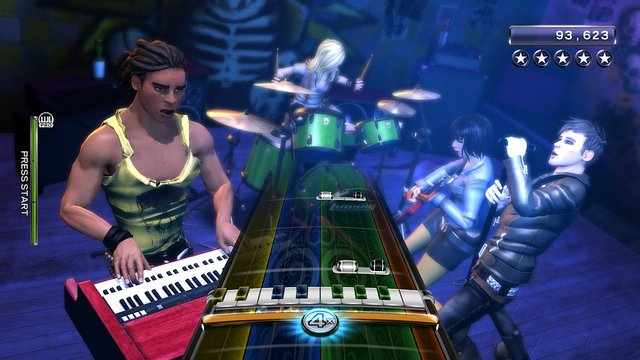 Now, even though Guitar Hero III (which came out around the same time) had many features that Rock Band did such as online gaming and similar modes, if had it not been for Rock Band, would Neversoft ever have incorporated other instruments into their franchise? Obviously we can speculate about this all day but clearly Harmonix created the benchmark for which Neversoft were forced to step up to with their next title, whether they actually had the idea to do it in the future or not and after seeing Rock Band’s success, it was no surprise that World Tour featured a similar band set up.


Delving even further down the timeline, what about games such as DJ Hero, would that franchise exist today had Rock Band not introduced the idea of different peripherals into gaming? What about other rhythm games such as Just Dance, would that be alive today had games like Rock Band not started the rise of the genre’s popularity in the first place?


Again it is speculation but Hamonixs first Rock Band title undoubtedly influenced a generation of developers to see how far they could push the music video game genre. Rock Band however, didn't just influence new hardware or the music video game genre itself, they also managed to have an impact on two other things: the players themselves and the music industry. Let us first explore the idea of how the franchise as a whole inspired us, the players. 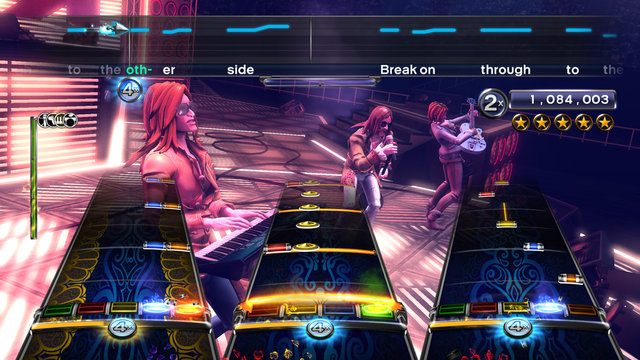 For some Rock Band introduced the idea of playing musical instruments to people that may not have pursued this idea before. This is probably more apparent with something like the drums because even though they aren't real, there is some kind of technique within the game that needs to be used which is akin to actual drum playing.


For some people this led them on to trying out an actual drum kit or other instruments and whilst Guitar Hero may have been the first to inspire people to perhaps pick up a real guitar, Rock Band was probably the first game to inspire people to start actual bands. It was also the first game that incorporated the idea that you could learn an instrument through a video game, which is clearly related to the drums but also the keyboard as well, which was introduced in the later title: Rock Band 3.


Then there's the impact that the game had on the music industry and how this was linked in with the introduction of the Rock Band Network. Released in March 2010 for Rock Band 2, RBN allowed people to author their songs into Rock Band tracks and then release them through the network. Created by Harmonix with the help of Microsoft, this library was available only to the Xbox 360 due to limitations with the PS3. However, Sony's version of the Rock Band titles did get some tracks, which were released on a monthly basis and picked based on their popularity on the Xbox library. 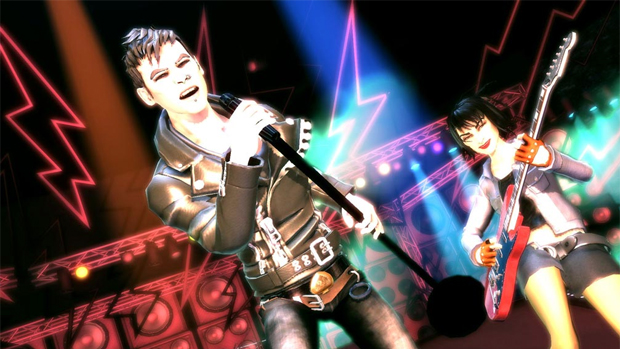 This RBN however, unlike Guitar Hero's GHTunes, was not just for players of the game. It actually allowed anyone who could master the process, which was apparently very hard and time-consuming, to upload their tracks. The Rock Band Network subsequently attracted lots of attention when it was first introduced, mostly and rather surprisingly from record labels and established musicians. Labels including Sub Pop authored music by some of their bands for the network, which included Nirvana, Flight Of The Concords and The Postal Service, whilst other artists such as Alien Ant Farm, Devin Townsend, Ministry, and Evanescence also allowed songs from their back catalogues to be authored for use on RBN.


The Rock Band Network then was clearly a useful tool for musicians and the music industry saw it as new outlet for with which to push new and old music. Here was a brand new way to reach audiences, one that was most probably cheaper than the conventional methods, even if it wasn't easier. With RBN, bigger musicians were given the chance to not solely rely on the traditional methods of publicity to conjure up new followers and smaller bands had large-scale platform for which to find some fans. It changed the music industries perception of how to market music and it gave them a whole new stage to play with. Rock Band wasn't just a game anymore; it was a brand new business opportunity.


Speaking of business, Rock Band Network also helped to create other profitable opportunities, this time in the form of a new breed of companies. For a fee, business such as Rhythm Authors would take bands song(s) and author them into their Rock Band counterparts. WaveSound Group were among these companies and they released songs from artists such as Steve Vai and Widespread Panic on RBN. In essence then, RBN helped to kick start some small business opportunities for the world, which is a pretty remarkable feat for a title involved in what was once just a nerdy past-time.

From the music industry to the game genre it inspired, Rock Band managed to not only influence a generation, but it also managed to hold a special place in our hearts. Yes the critics will compare the franchise to its rival Guitar Hero and they will point out that Harmonix's first love child did in fact manage to bite them in the proverbial ass by making more money than them. However, who has over 130,000,000 DLC downloads? Who didn’t stop providing new content until last week? I’ll give you a clue: it wasn't Guitar Hero.


For now then, it seems we must say goodbye to the world of Rock Band innovations. Xbox 360 players will be pleased to know though that Rock Band Network is still up and running so new content could still be on its way. For the rest of us, let’s thank Harmonix for five years of aching wrists and dirty looks. It has been a pleasure Rock Band; hopefully we'll meet again soon.