‘Rock of Ages’ Will “Rock” You in First Trailer

If American Idol and Glee have taught us anything, it’s that people really, really, like watching glitzy re-packagings of hit songs from yesteryear. So of course the first trailer for Rock of Ages plays like a free-for-all of catchy '80s tunes vying for that spot in your brain that can’t remember when the laundry is done, but will keep a Journey chorus on loop for days.

So, no, it’s not the a movie version of the delightfully quirky Xbox game from earlier this year, but Rock of Ages looks primed to keep the feet of audiences in toe-tapping lockstep when it comes out next year. Sure, the collective cultural “meh” to last week’s New Year’s Eve calls into question the appeal of a star-studded cast, but “Ages” has the added benefit of said stars belting it out to an adaptation of a crowd-pleasing Broadway hit. And hey, there’s a monkey!

The talky interludes separating all that singing and dancing will follow would-be rock star Diego Boneta as he falls in love with Dancing with the Stars champ Julianne Hough, a.k.a, that girl from the Juicy Fruit ads. The trailer also makes a big deal out of Tom Cruise, who may seem an unlikely choice to play a god of rock, but then again, this is a movie that considers songs like “We Built This City” the rock music of a generation, so it’s clear we’re dealing in broad brushstrokes here. 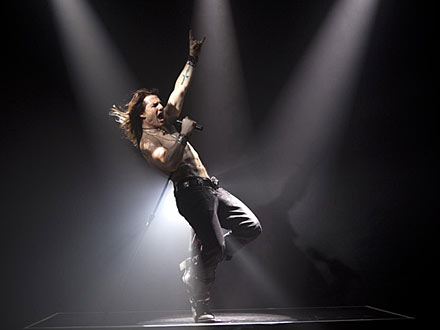 There’s also Russell Brand and Alec Baldwin as owners of a sunset strip club that needs to be protected from, what was in the musical, a group of German housing developers. So as to not offend the delicate sensibilities of German housing developers everywhere (while also finding a place for another actress who isn’t busy), it looks like that part has changed for the movie. Instead, we get Catherine Zeta-Jones leading a group of uptight religious ladies, whose only crime is hating those kids and their damn music!

Will America ever tire of '80s nostalgia escasping its rightful place in karaoke bars and into every other conceivable media format? We'll have to wait for the film's June 1 release date to find out.