Time travel stories are tricky because they can raise so many questions that your brain starts to hurt. On the other hand, if the focus isn't on the science elements, time travel can quickly devolve into a fish-out-of-water tale that gets mined for cheap laughs. With Rocket Girl, writer Brandon Montclare (Halloween Eve) and artist Amy Reeder (Batwoman) are trying to strike a middle ground. They're offering a story that doesn't get too bogged down in the butterfly effect time conundrums but also doesn't simply say "Hey, wasn't the past weird?" If the first issue is any indication, they might have something. Rocket Girl #1 has a pretty interesting premise, though I hope that characterization is a focus of future issues.

The basic idea behind Rocket Girl is presented right at the start of the issue (seems like a good idea, huh?). The narration begins, "My name is Dayoung Johansson. I'm 15 years old and a cop from the future. I'm going back to save the world... I just hope I'm not too late." The most compelling thing about Rocket Girl #1 is the second sentence there. Johansson is a member of the New York Teen Police Department. There's no explanation here whether there is a separate adult police force or if adults are obsolete. Still, it's a pretty cool twist. Her comrade in the force has a pension and is a wise veteran at 20. The police commissioner sports a thin starter mustache but looks younger than many Robins have been. 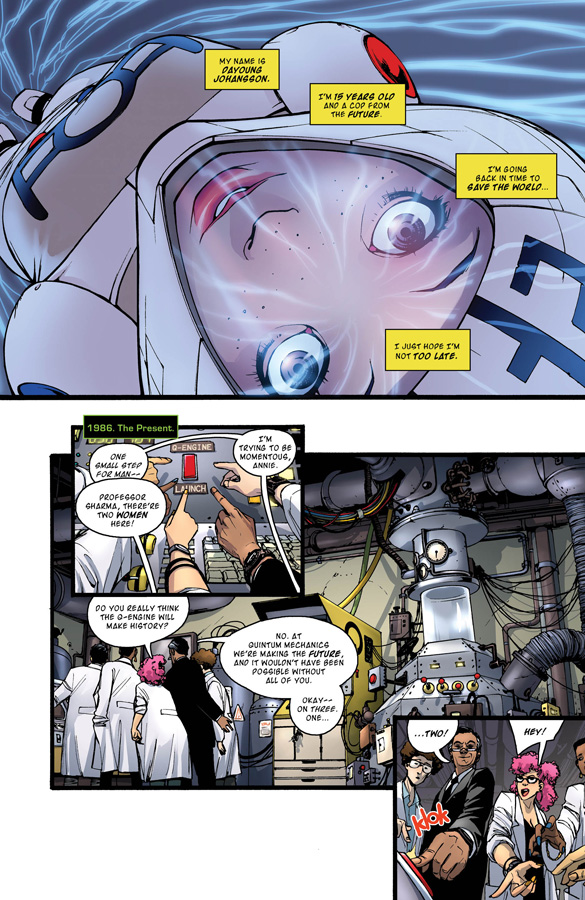 The thing that has made Johansson travel back in time (to the year 1986) is that she believes the corporation Quintum Mechanics has been using time travel to change events and ensure their market position in the present. We're led to believe that Quintum is very powerful, and this is a risky mission that most officers would shy away from – but not Dayoung. When she arrives in 1986, she finds that Quintum is just a group of young scientists trying to make advances. Strangely, the issue veers from introducing elements of the Quintum organization to have Johansson assist the police of 1986 with a shooting, even though she's 15 and sports a jet pack.

The point of Johansson – or Rocket Girl, as one of the Quintum scientists calls her – helping the police seems to allow the reader to see what she's capable of. Though she's only a 15-year-old girl, she easily apprehends the suspect and then evades the police officers who are trying to question her. However, that scene feels less interesting than much of the other set-up. It also raises many questions. Why would two cops in 1986 tell a 15-year-old girl in a weird space suit and jet pack details about a shooting? In a first issue, it's important to set the tone and it's unclear what sort of world Rocket Girl shows. 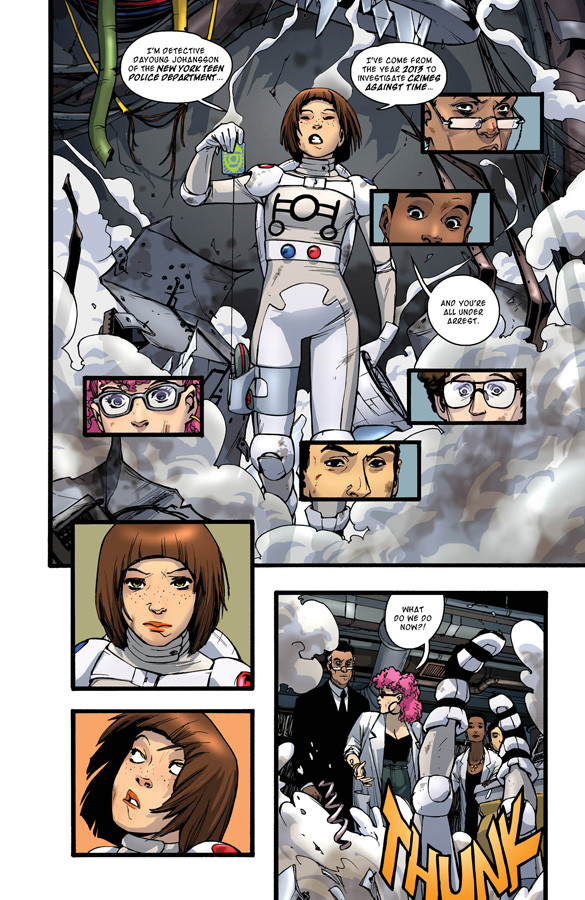 It also seems like a missed opportunity to reveal more about Quintum or the scientists. There's one with pink, curly hair named Annie who has a bunch of dialog lines, but I don't feel like I know much about her. The other Quintum scientists feel like extras here. Though they will most likely get developed in future issues, I'm not sure the generic action scene that occurs in the second half of this issue is better than giving us more character development or big plot points.

As I mentioned, Montclare and Reeder do make some cool choices in setting up the story. The "future" from which Johansson arrives is 2013, but it's a 2013 with flying cars, teen cops and rocket backpacks. So far, the creators don't seem especially interested in reliving the "zaniness" of the 1980s. There's not much about this version of '86 that's different from our real world except that NYC, and Times Square in particular, is much seedier and dangerous. 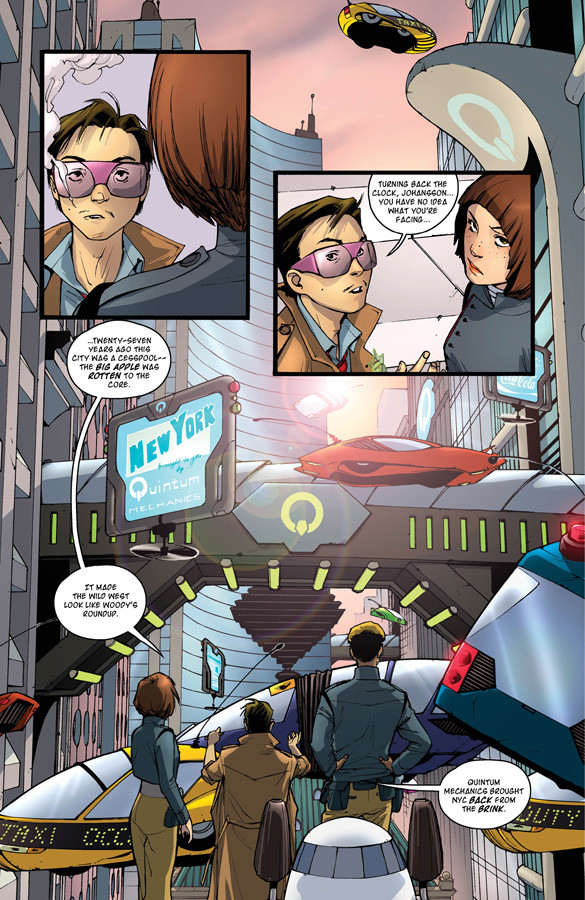 Besides the premise, the other thing that really makes Rocket Girl stand out is Amy Reeder's outstanding artwork. She has great line work, an excellent sense of graphic and page design, and a knack for drawing revealing facial expressions. Unlike many artists who have drawn teen female superheroes over the years, her Dayoung looks like a girl. It's not just that her frame is smaller; her face is different, too. Although Reeder's version of "the future" isn't totally unique, it does look pretty impressive and well imagined.

Rocket Girl #1 is a solid debut issue. It will take a few issues for Montclare and Reeder to unfold their plans and reveal more of the central danger behind Quintum. And though that plot element is very important, I also hope that they also take the time to show more about the characters involved in this story, especially the Quintum scientists but also Johansson, too.