It's difficult to gauge what sort of series a title will be based on the first few issues, let alone just the first. I think it's only fair to try to wait until at least the first arc to decide whether you want to keep reading. We can, however, make small evaluations along the way. The second issue of Rocket Girl by writer Brandon Montclare and artist Amy Reeder builds on the solid debut of the first, making some gains in character development while continuing to display great art. 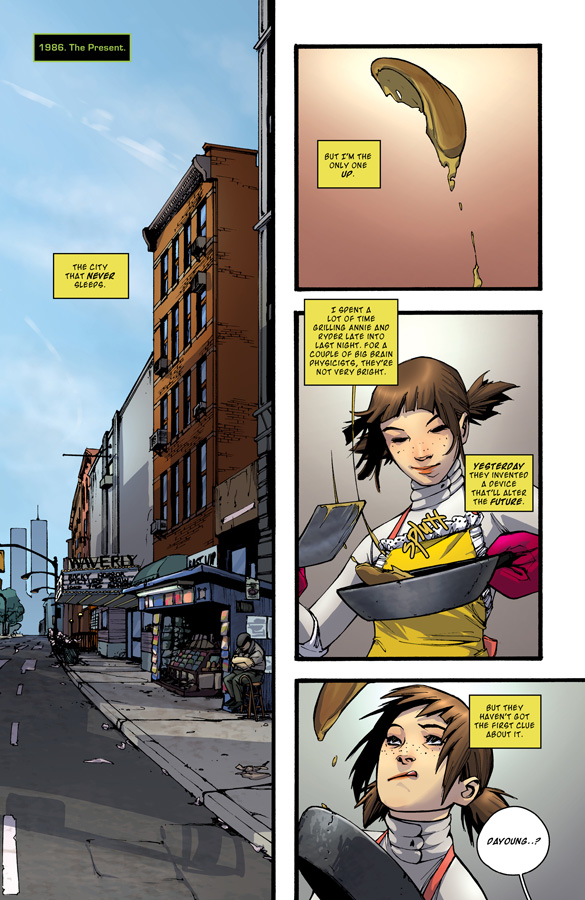 Dayoung Johansson is a teen police officer from the future (a very high-tech version of 2013) who travels back in time to 1986 to stop some noble-minded scientists – at a possibly evil corporation – from doing something that will ruin her future world. Along the way, though, she feels a sense of obligation to help out in emergencies, whether it's foiling a bodega robbery or aiding workers dangling off the Statue of Liberty.

It seems like with a second issue, a good move is usually to either build the plot or develop the characters. Monclare and Reeder chose the latter option. We don't really learn much knew information about Quintim, but we do spend some time with two of the scientists, female roommates Annie and Ryder. Dayoung is currently crashing with them and before they wake up she engages in a number of rescues. However, this concerns the scientists because they have no idea what to do with Dayoung. On the plus side, she's made them pancakes. 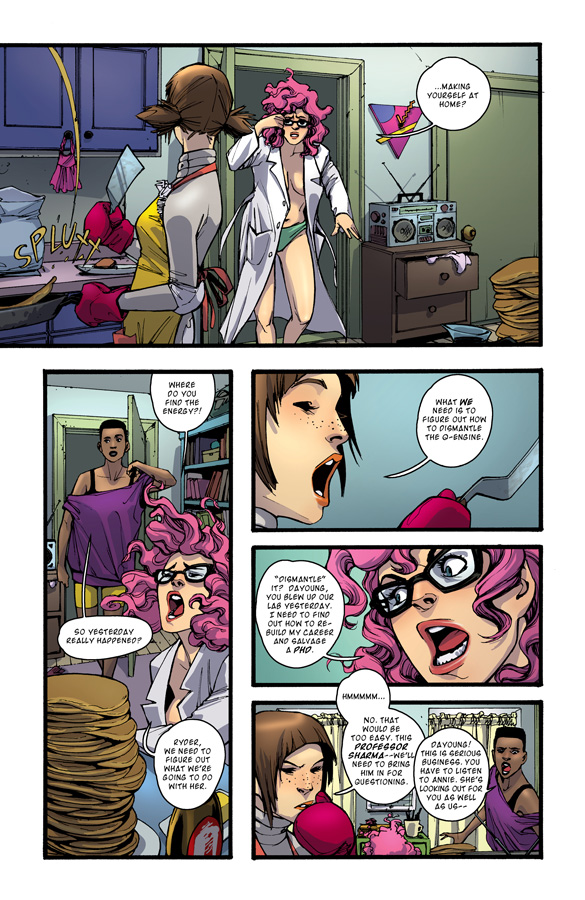 One of the things that I liked about this issue is that the creative team decided to let Dayoung seem imperfect. In the first issues, she was so on top of everything that it made her less relatable as a teen. In this issue, though, we see Dayoung's immaturity come out both in 1986 and 2013. In '86, she's forced to give up her jetpack and essentially becomes just a teen for a time. In 2013, she acts brashly, even when her partner is trying to give her warnings.

Though the majority of this issue centers of character development, there is a cliffhanger at the end that indicates that plot changes will be an important part of the next issue. In a neat maneuver, Montclare and Reeder actually tell parallel stories in the two time lines – one in 2013 (which is ironically the past in Dayoung's experience) and one in 1986. Both stories come to confrontations that mirror each other. Reeder effectively splits the last page with Dayoung facing a similar challenge in each time that really unites the parallel stories. 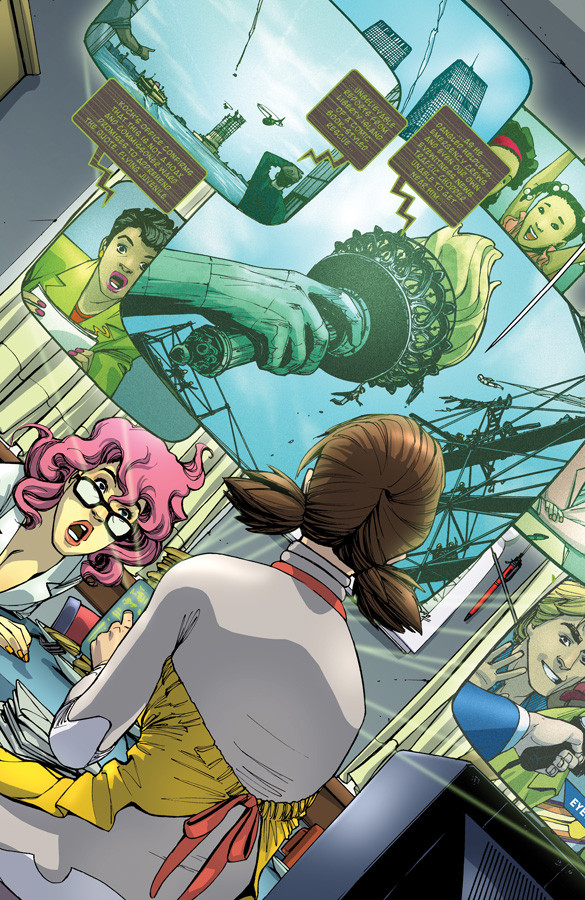 Overall, I think Reeder's art is the highlight of both issues of Rocket Girl so far. She makes Dayoung seem calm one minutes and pouty the next. She also adds exceptional character touches. In the first issue, it seemed pretty clear that Annie is supposed to be a punky eccentric because of her pink hair. In this issue, Reeder actually underlines Annie's personality much more effectively in issue #2 through her New Wave clothes and earrings that are zipper heads. The action scenes buzz with a fun energy, as well. Reeder's art is so great that I'd be tempted to stay with Rocket Girl if she draws it, even if I'm not loving the story.

As it is, I would say that I like the story, though I'm not totally won over yet. I think the character developments and mirroring finales makes this a strong issue overall. The overarching story, though, is still a little murky. I understand that suspense dictates that information should be doled out slowly, but I hope that readers are soon given a long-term plot reason to invest in Rocket Girl because I think that's the one element missing from making this series an excellent one.