"Anthology films start off strong"
By: Steven Armstrong | Movie Reviews | December 19, 2016
Here we are again, almost exactly one year removed from the release of last year's The Force Awakens. This year, another highly anticipated release in the Star Wars universe is here in Rouge One: A Star Wars Story. From the looks of the trailers it seemed that this film could be a worthy entry. Peel back the surface layer of the trailer and remember that this film is helmed by director Gareth Edwards, who brought us the stellar 2014 effort Godzilla, and the interest is piqued. If you liked that movie, you might give Rouge One a chance. If you didn't, and not everyone was a fan of Godzilla, you might still give Rogue One a shot at proving itself because the odds are, you might be an occasional Star Wars fan. Here is the kicker about Rogue One: you already know this story. It is laid out in the opening crawl in the original Star Wars as the set up to how Luke Skywalker and company get involved. What we don't know, is how the rebels obtained the secret plans for the Death Star. That is essentially what Rogue One is all about. 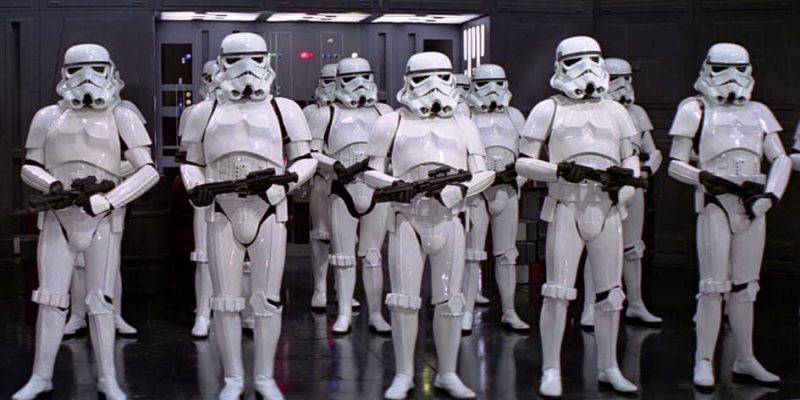 You could make the case that in any story, there are some details that just don't need to be divulged because they don't necessarily add to the big picture of the story. Rogue One is no exception to this argument, particularly since with Star Wars, there a number of different mediums that tell stories which explore the space between Revenge of the Sith and A New Hope. It is familiar territory. In that way, Rogue One is similar to The Force Awakens. One film brings us the familiar in spirit and tone, while the other brings us the familiar in the time period. The fresh factor is dampened a bit because we are reintroduced to characters we've met previously and we are led on a journey that we already know the outcome of. A similar case could be made for George Lucas' prequel films, but that is another discussion The aspects of Rogue One that are fresh come in the form of the new faces we see on this adventure. Jyn Erso (Felicity Jones) leads a cast of colorful and memorable characters that include a conflicted Captain Cassian Andor, a snarky droid called K-2SO and a group of others on a mission to steal the secret plans to the Death Star and deliver them to the Rebel Alliance. This film forms the foundation of Jyn as a character. In her heart she is a fighter, when the chips are down, and make no mistake, they are down, she chooses to fight. It is her go-to response to obstacles. No matter what, she will do that.

So much is inspired about this film. There is something to be said about a Star Wars flick that has elements of well, the war epic ala Saving Private Ryan and other such films. The elements of the Force and lightsaber battles are toned way down here in exchange for a more grounded story and the result is quite satisfying. Visually, the film stands among the best in the series of Star Wars films. Everything is nearly perfectly rendered and moves about flawlessly. Particularly in the case of the return of Grand Moff Tarkin, who as we all know was played by the great Peter Cushing in the original film. An achievement in its own right, bringing Cushing into the fold is a stroke of genius, just one of those treats that make a huge difference in the end result. The face of Tarkin looks so real and lifelike, it is clear that the technology has definitely reached a new level since Tron: Legacy, where the younger version of Kevin Flynn looks painfully like video game animation attached to a live-action person's body. Tarkin looks loads more convincing, though there are the slightest of slightest moments, where something doesn't feel exactly fluid about the face. Still, Tarkin's inclusion is welcome and fits in perfectly with everyone else. The action is strong with this film and very well choreographed. There isn't a ton of action, but the beats that are present are powerful. Like Edwards' Godzilla, the first two acts might feel slow, but the third act is a powerhouse for the ages. The man knows how to withhold those necessary gems until the last possible moment for maximum effect. You'll have to see the film to understand just what that means.

All actors are in top form. Felicity Jones turns in strong work as Jyn Erso. She'll be just as popular as Rey and could actually surpass her in some circles. Her power wasn't as flashy as Rey's ended up being, but rather, Jyn's was more of an inner strength that was depicted in a less, "I'm a woman and I can do this just as good as the guys can," and more of "I am in the trenches with all of you; I'm a rebel too". Leia was a rebel too, but she didn't get down like Jyn does. She has a worthy counterpart in Captain Cassian Andor (Diego Luna), who feels very much like a darker version of Han Solo. In fact, his character might have actually been Han Solo were Han involved in the fight earlier. There are great moments of genuine acting between the two throughout this film that lends some significant weight to the proceedings. Are you tired of the Death Star? If so, so are many others. It has been revisited way too many times. From the original to Return of the Jedi, which is pushing it already. And then again spiritually in The Force Awakens. And again here with Rogue One. You might be ready for some newer, fresher takes on the vast world that George Lucas created. That said, this film certainly deserves a seat at the table. If anything, this proves that you can absolutely have a Star Wars film that isn't a Jedi-centric story and guess what, it can be a quite successful one at that. Final verdict, go and see Rogue One. The force is with it.
Rating
9.5
Pros