1) Shadow of the Colossus & ICO HD Collection
This game was already locked at number one for me the day that it was released.  The first time I played Shadow of the Colossus, it was unlike any game that I had ever played before.  It was so simple, but at the same time difficult; beautiful, yet sorrowful.  Shadow hit me on a level that I had previously never thought possible, and of which has never happened again.  Shadow was a groundbreaking game for me, so its spot on my top 10 list was pretty much set.  When compiled with ICO at a lower price tag, this collection is one that all PS3 owners should have on their shelves.

It's hard to say why, but Shadow of the Colossus captured my heart just as easily the second time as the first

2) Skyrim
Chances are that if you are reading this list, then you have already made your opinion on whether or not you are going to be playing Skyrim, but for those who have not played or heard anything about it, Skyrim is a pretty amazing game.  Let me preface this by saying that there are still a lot of bugs (as in most all Bethesda games), but there is also an extreme amount of polish from the last Bethesda developed game, Fallout: New Vegas.  The sheer depth and scope of everything in TES: V makes it something that you really should experience first hand, and will likely be in the top three of most game websites “Top 10” lists.
﻿

Fighting Dragons in Skyrim is a thrilling experience everytime

3) Saints Row: The Third
One of the podcasts that I listen to had a running joke where they would continue to tell one of the four members that “You should really play Saints Row: The Third”, without ever really explaining anything else (as to why he should play the game).  While this turned into an ongoing joke, I cannot think of a better way to tell you to play this game outside of just saying “You should totally play Saints Row: The Third”.  If you have played the previous games and got tired of certain elements *cough* mandatory side activities *cough*, the gameplay systems have been changed for the better and the game as a whole is much crazier.  The best part is that the story is unique enough from the other two as to where you can enjoy the game if you haven’t played the other two just as much as if you have.

This image explains Saints Row: The Third better than I ever could

4) Batman: Arkham City
Arkham City had all the makings of being a great game, and it turned out not to disappoint.  Rocksteady made enough changes to make the game fresh, while keeping many of the core elements as fantastic and as polished as Arkham Asylum.  The inclusion of a much more open world environment in addition to tons of collectibles and side quests give an extra depth to the gameplay that made Asylum so great. Combine this with fantastically rendered characters (including Batman and all of his nemeses), a compelling story and setting, and you will realize that Rocksteady is giving you another great excuse to don the cowl and protect the streets of Gotham.

5) Uncharted 3
One of the main quips that many people had with Uncharted 3 was that it was essentially just more Uncharted 2.  The next thing that most critics say, though, is that while it is just mimicking an older game, there could definitely be a worse game to mimic.  I myself had a fantastic time with the game, and while it is true that it didn’t have as large of an impact as Uncharted 2, I did not find that it made the game any less fun.  The story was still quite enticing and some of the elements that were handled a bit worse in previous games were handled much better in this entry.

Uncharted 3 may not have been as groundbreaking as Uncharted 2, but it definitely made me like Subway more

6) L.A. Noire
With this generation of consoles, it seems like the one thing that everyone is trying to get is the best value for their dollar (as it relates to video games).  What I mean by this is that almost all big games now release with some sort of multiplayer element that will keep the gamer interested in the game far after he or she has completed the single player campaign.  L.A. Noire was a bit unique in that it was released as a wholly single player game.  There were a few things to do outside of the main missions, but the gist of the gameplay was in the story mode.  All discussions about the messed up nature of Team Bondi aside, I found that Team Bondi and Rockstar took a risk on L.A. Noire, and it ended up turning out great for them.

Kinks aside, I thought that LA Noire turned out to be a very competent game, which also looks absolutely gorgeous

7) Bastion
Out of all of the downloadable titles released in 2011, none had a larger impact on me than Bastion.  At its top level, a team that only had six members and one voice actor developed it.  Yet despite the small team size, the gameplay was fresh and entertaining, and the amount of content that was included was quite extensive, considering that it was a downloadable title.  In addition, it was just announced that the team will be releasing free DLC in the near future that adds a few new maps and a new mode.  This is really cool to see, because as a team of so few, you would expect the DLC to be priced higher, yet they seem to be catering to the fans much more than other developers.

Bastion was quite a surprise, and with a deeply personal narrative, it will easily make many top 10 lists

8)  Rayman: Origins
This would be my sleeper pick for my top 10 list, because I really did not expect much from Rayman: Origins.  The trailers that had been released made the game look good, but the fact remains that the Rayman name doesn’t really have the pull that it used to.  Everything about the game, from the gameplay to the graphics to the sound left a good taste in my mouth that I hadn’t received from any other game that had come out this year.  Some could say that Rayman: Origins was a “hipster” release, but the fact remains that it was a great game nonetheless.

9) Deus Ex: Human Revolution
I was a pretty big fan of the first Deus Ex, and like many of you, was not the biggest proponent of the second iteration.  Luckily, Eidos changed the game for the better with Human Revolution.  The whole black and gold color scheme in combination with interesting gameplay made up for the fact that the second entry in the series was, let's say, less than ideal.  All in all, Deus Ex was a fun game that came out this year, but for the things that it did, there were also other games that did it better.

If you need any Black and/or Gold, Deus Ex has your back

10) Dead Island
Dead Island certainly isn’t a perfect game, and the fact that Deep Silver dipped into the zombie genre once again for this release did not make me too thrilled, but Dead Island ended up being just plain fun.  The story and the characters were a bit weak, but killing zombies with obviously makeshift weapons in a location that hasn’t really been explored too much (in sandbox games) was a lot of fun.  The cooperative multiplayer allowed for lots of fun to be had, and I found that the multiplayer and single player shenanigans were able to outshine the few down moments that Dead Island had. 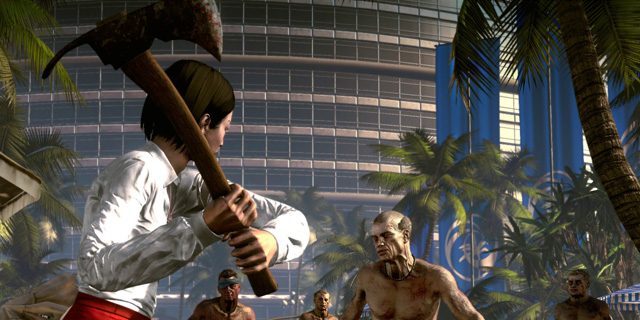 Dead Island may not be the best game, but it can prove for a great time whether alone or with friends