Shield, does not destroy the Marvel Universe that you know and love… at least not in the first issue. It does lay down the framework for one of the largest retcons (retroactive continuity) in Marvel’s history. Shield’s history spans throughout the ages, and begins with the first Brood attack on earth. The Brood is an alien race that takes over their host body in order to infect and colonize the planet of their choosing. However, they are defeated by Imhotep, an Egyptian warrior holding a spear and a shield.

Jonathan Hickman (Nightly News, Red Mass for Mars) tells the story of Leonid, a teenage boy that is taken to the Immortal City, an amazing sub-city underneath Rome. He is taken before the high council of the city and the order of Shield is explained to him. Hickman cherry picks great historical figures as agents of Shield to give the overall impression that they are everywhere. In one such case Galileo creates a device to stop Galactus from eating earth years before Reed Richards was ever forced to do so. 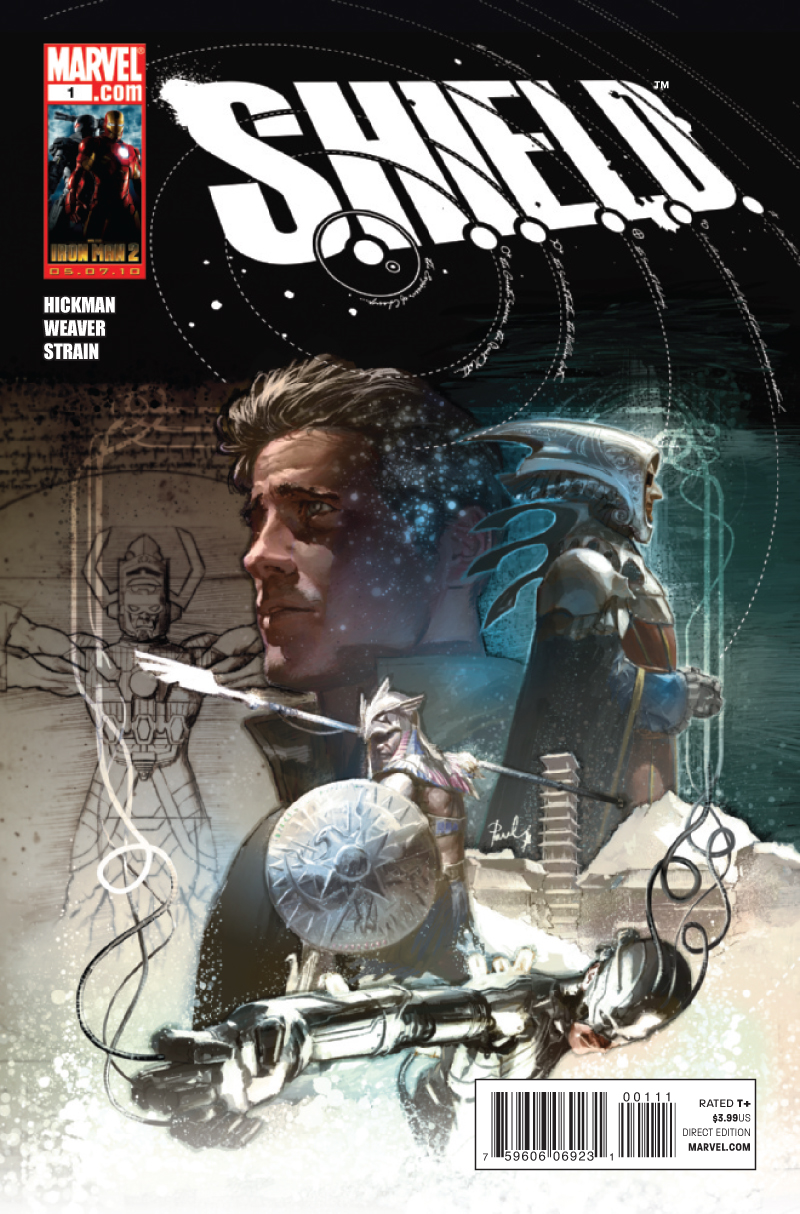 Leonid is asked to join the council, though the reasons remain unexplained. Three years later his father, The Night Machine, visits him. His father has come back from the dead to reveal something to his son. He leads his son to Iter: The door that can’t be opened. Low and behold… His father has the key. Guards are sent upon them, Father and Son are separated and Leonid’s story begins.

Hickman’s other work at Marvel has been good, but this book is truly great. There’s more of his mark on the books design than any of his other work. The story also feeds from his other titles: Secret Warriors and Fantastic Four. Reed Richards father makes an appearance in the book, along with Tony Starks, both agents of Shield. Ah, now the book has your attention. The issue lays down a lot of ground work for the larger story being told and although not ground breaking in itself, it does grab your interest. Depending on where the story goes it could end up becoming one of the most important first issues of the Marvel Universe.

Hickman and Dustin Weaver (X-Men: Legacy) make a story that is moody, beautiful, scary and exciting. They literally go to five different eras of time and nail each one. At no point is an era out of place or inaccurate. The addition of the historical figures to the Marvel Universe in itself is not interesting, but their interaction in the Universe is. Some historical events clearly never happened such as Galileo fighting Galactus or Zhang Heng speaking to a Celestial, but that’s what makes them interesting. That is what makes the addition of real historical figures to the Marvel Universe fresh and original.

At face value this issue has some interesting historical events that add mystery to the Marvel Universe. But if you dig deeper, you’ll find that this is only the beginning of something that is going to change Marvel for years to come. It’s a breathe of fresh air in a suffocating universe. As with most of Hickman’s stories, we do not know the half of it yet… Which makes it all the more interesting.

Mark Waid was the last writer to do anything interesting with Galactus, until Hickman. Follow Dustin on Twitter and FormSpring.