It's been a little while since we've heard from the star-crossed lovers Marko and Alana from the hit series Saga by Brian K. Vaughan (Y: The Last Man) and Fiona Staples (T.H.U.N.D.E.R. Agents). Since Saga recently won the Eisner for Best Series (along with a few other awards), one would imagine there would be some new readers this time. Although issue #13 doesn't give much in the way of recap or backstory – which might cause some new readers confusion – it does reintroduce us to all of the main characters. It's primarily an issue of set up rather than full-on conflict, but it still works wonderfully because of the weird and fascinating cast of characters the series has developed.

One of the major events that occurred towards the end of the previous arc is that Marko's father, Barr, who was already dying, sacrificed himself to allow Marko; Alana; their baby, Hazel; Marko's mother, Klara; and their ghost babysitter, Izabel, to escape. In this issue, Marko seems to be seriously grieving, a process that involves staring off into space and growing a handsome beard (it really brings out his horns). Klara, on the other hand, seems angry that her husband has left her and hadn't told her that he was dying. (As an aside, if this ever gets made into a movie/TV series, can Isabella Rossellini play Klara?) The group is heading to meet writer D. Oswald Heist, author of the romance A Nighttime Smoke, the book that brought Marko and Alana together, hoping that he has advice for them.  Meanwhile, the bounty-hunter The Will is also grieving his colleague and flame The Stalk. He's so shook up that he's having visions of The Stalk. Maybe Vaughan liked Jean Grey's guilt-fantasy appearances in The Wolverine?

While readers have previously met the cantankerous Heist, the Marko group gets a pretty odd first encounter with him. Heist saves their bacon, but he's also drunk, wearing nothing but a robe and piss-stained tighty whities, dropping C-bombs while he warns them to stay away from his money. Vaughan includes the line "But no one makes worse first impressions than writers." It's the kind of funny meta-commentary that Saga does well. As much as Saga is a space adventure and love story, it's also a story about creation and re-creation. There's another moment in the beginning of the issue where a soldier who had a run-in with Alana and Marko tells his story to the only group that seems to believe him – a tabloid writer and photographer. Throughout its first baker's dozen issues, Saga frequently makes jokes or plot moves that are actually smart commentary on politics, war, media, sex, justice and so much more.

Vaughan is such a skilled writer than he's even able to wring real character tension out of sit-com tropes like the "awful in-laws." Alana does not get along with Klara, but she needs Klara around to help with the baby. This type of dynamic could get very predictable but Vaughan always keeps the dialog within the character's voice, not some jokey flat version of the mother-in-law or daughter-in-law. The Will having visions of the dead is another example of a familiar story element that Vaughan makes work. The Stalk mentions that the slave girl that The Will rescued still doesn't have a name. So the issue ends with a moved The Will giving her the name Sophie. It's a really interesting maneuver, ending on a character moment like this rather than something plot-based.

As always, Fiona Staples nails the art magnificently. She adds extra details that really enhance both the world and themes of Saga. The first page of the issue is a full page of the front of the Landfallan Army Medical Center, with the poignant joke that a homeless veteran is pushing a shopping cart around outside. The tabloid reporters totally look like the kind of snarky kids you'd seen on an alien version of that TMZ TV show. Later, we see a picture of The Will (who has always appeared with a shaved head) with hair and he looks like Astronaut Mike Dexter rather than the jaded and run-down hunter he's become. 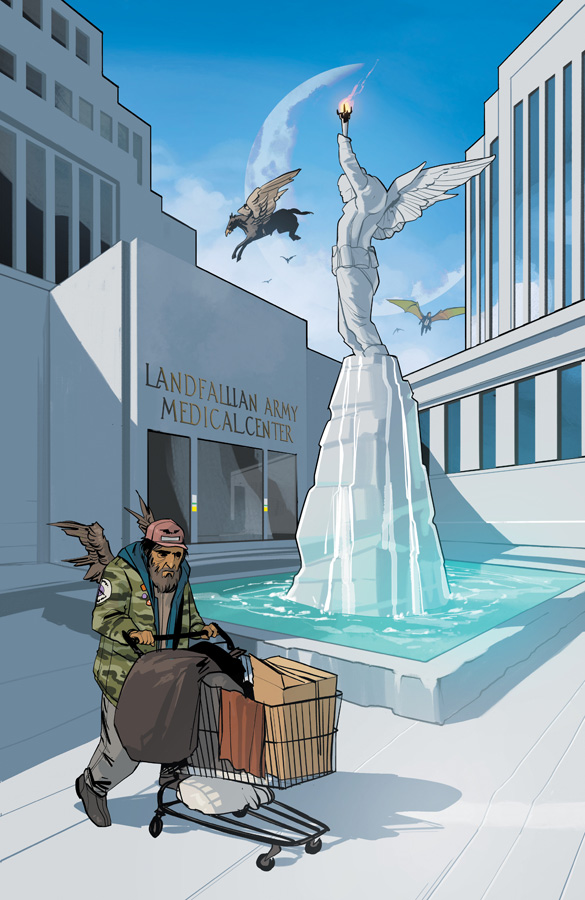 It's odd to rate a comic book so highly when nothing especially consequential happens in the plot, but that's the treat of Saga. Enjoyment of these issues is not contingent on the plot mechanism. We've seen Vaughan and Staples construct arguments between Marko and Alana that were more compelling than some of the biggest catastrophic battles in mainstream comics. It probably does behoove new readers to catch up on the first twelve issues since there isn't much recap or backstory here. After that, though, Saga #13 is highly recommended.