Saga #14 Review: The Opposite of War

There's something very comforting about beginning a new section of a creative work by someone with talent you trust. Whether it's a TV show, book or comic, there's usually uncertainty involved when you start a new installment. It's pretty rare to have full confidence that what you're about to experience is going to be good and unexpected. This sort of faith is what I have when I begin a new issue of Saga by Brian K. Vaughan and Fiona Staples. I'm not thinking about whether it's going to be good. I'm thinking about how it's going to be good. The latest issue is an example of how Saga touches on personal and emotional topics while being a science fiction adventure story.

Saga #14 covers three distinct threads this time. The issue begins with the two tabloid reporters Vaughan and Staples introduced in the last issue. We learn that they're names are Upshar (writer) and Doff (photographer). They're interviewing Alana's step-mother, who it turns out is one of Alana's old classmates (Ewww). We also see much more interaction between the Alana- Marko crew and writer D. Oswald Heist on Heist's planet of Quietus. Finally, we are caught up with The Will and Gwendolyn, who are not-so-hot on Alana and Marko's trail. In fact, The Will says that he's ready to retire from "freelancing" until he receives some crucial information about his deceased flame The Stalk. 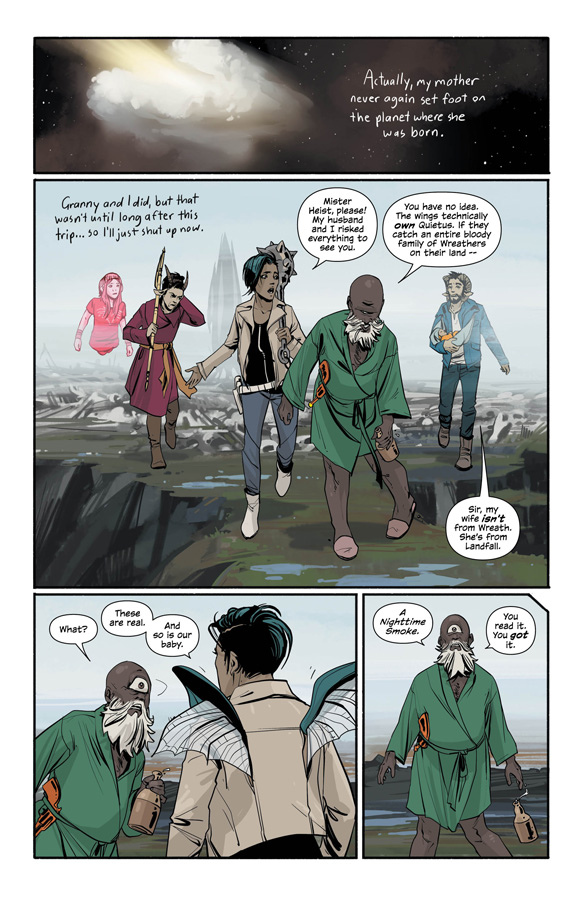 As often happens in Saga, character moments trump plot developments. In this issue, however, those character moments are also layered with some really poignant writing that shows not only how these characters are feeling but how they're similar to each other in certain ways. There's a particular thread of loss that shows up in #14. Heist, the write of the romance that brought Alana and Marko together, had been previously shown in his brief appearances as an angry, drunken coot. Here, though, we see that he's suffered great loss. He has a heartfelt and surprisingly compassionate talk with Klara, Marko's mother, who recently lost her husband. Heist utters the sad but precise comment about surviving a loved one, "But if your spouse was anything like mine, I regret to inform you that the rest of your days will be, by and large, kind of shit." Lest you think that Heist is a total softie, he also pukes on a baby. 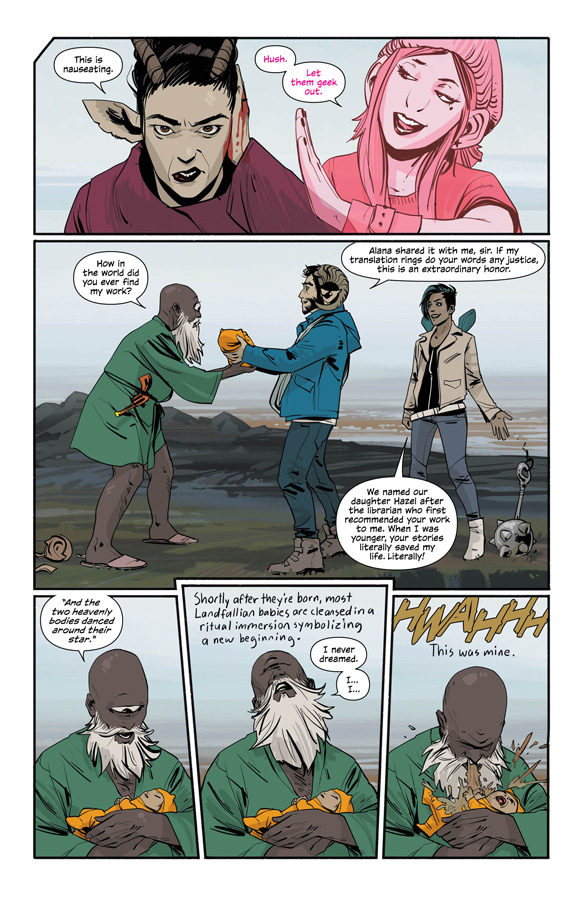 Meanwhile, The Will is also dealing with the loss of The Stalk but in an entirely different way. He's seeing her when no one else can. It's not clear if this is a vision, ghost or some sort of magic, but The Will is so affected by seeing her again that he's contemplating retiring in the middle of his pursuit of Alana and Marko. "Ghost Stalk" also manages to get The Will act on the sexual tension that's been brewing between Gwendolyn and him. Gwendolyn is less than receptive to his surprise smooch, but there's also a hint that maybe something between the two could happen at some point.

Another character who has dealt with a loss is the 6-year-old slave girl that The Will named Sophie. She's never been able to have a real childhood and seems to be dealing with a lot of confusion and guilt about the horrible things she's been subjected to. She is the middle of talking about how dirty she is when The Lying Cat (The Will's pet/partner) corrects her in the most lovingly casual way possible. The Lying Cat, already a fan favorite character and star of a T-shirt, here cements her status as super awesome.

Vaughan writes with such feeling and depth that it's easy to lose sight of the contribution that Fiona Staples makes. Her character designs continue to be spot on. The way she draws Even, Alana's stepmom, with her low-cut top and tacky dye job, we immediately know that Even is both calculating and clueless. The picture she shows the tabloid pair of her wedding to Alana's father, with Alana skulking in the background, is priceless. Her inclusion of "royal baby bump" on a TV set recalls a certain real life British royal birth while also connecting to the story of Prince Robot IV. 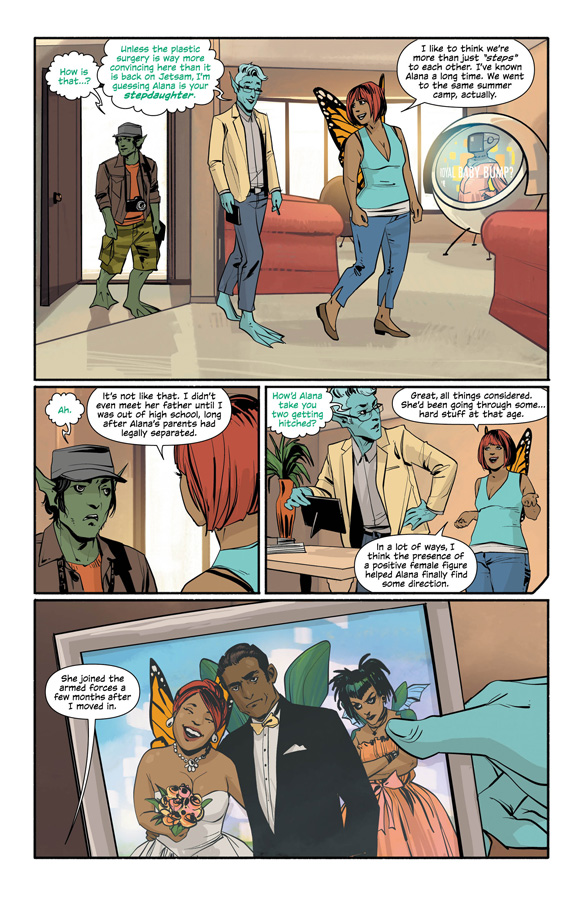 I have to try hard to find any fault in this issue, but I suppose one could quibble with the pacing of the plot. While the last two issues have been nearly bursting with great character moments, it's still a little unclear where the story is going. This is definitely decompressed storytelling, which sometimes gets unfairly maligned, but it may rankle some readers who want these different groups to cross paths more frequently. There's also little action per se in this issue. That shouldn't really be surprising, though. Saga does occasionally have some good action scenes, but it's not the point much of the series.

Overall, Vaughan and Staples deliver another excellent issue. Even so, we should not take their consistent greatness for granted because it's pretty rare to get a comic that's so regularly this strong.