I love me some sweet samurai stories, Yojimbo, Throne Of Blood, The Samurai series, Seven Samurai, Samurai Fiction, Blade Of The Inmortal, Lone Wolf and Cub are some of the staples of the samurai genre. They are also some of the most imitated out there. This week Image Comics is pumping up their samurai library with Samurai's Blood. Will this be a significant book in Samurai lore? Will this be an original title or another imitator? Well we can't judge a series by one issue, but I can tell you about the first.

Let us start with the art. It's a cross between manga and american. Is no Joe Madureira, but it gets the job done. The storytelling moves smoothly between panels especially the action. It tries to be impressive but it falls short in the design. Its not too stylish but it inspires to be. The characters are Inauspiciously similar to one another, which is a bit of a downer when you're trying to read this book and your not really sure who's who. Although the art has some problems is still enjoyable.

The story.... Well to put it simple, the story of Samurai's Blood is this: it was a time of corruption and a power struggle throughout Japan. One village was untouched by it, until one day it happened. The Sanjo clan is destroyed and usurp by Gakushi, this made Jun (one of our main characters) the last heir of the Sanjo Clan. 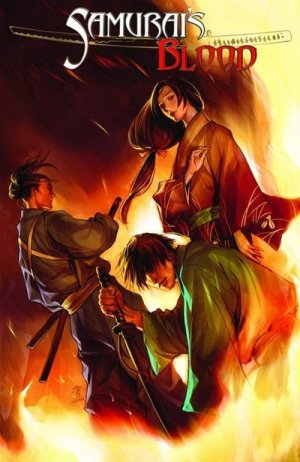 This also left Kajiro, Jun's best friend to be Jun's retainer (Samurai) Also joining Jun, is Mayuko, Jun's sister and Kajiro's love interest. Together they form a group of novice misfits, with a mission of vengeance and honor, to destroy their oposing clan.

The story serves as coming of age story for Samurai. It has a fresh, young tone in the characters yet maintaining the tone of the time the story is set in. The book is rich in detail, both in a historical sense and its subject. The characters are well developed, but are not that fleshed out. Maybe in the following issues they will deal with more character development stories as this issue deals more in presenting the setting they live in. The dialog is short and sweet, but the narrative captions tend to be annoying. The narration consist of ancient proverbs or are written in that style and reflect in the story. The proverbs gives this book a cliché vibe. Regretfully they appear in every page, for every simple action an ancient proverb helps describe what is happening.

Ancient proverbs are cool but this book has to learn the meaning of "too much" or else when Jun, takes a whiz, it will be presented with an ancient proverb. The action is not bad, you can see some homage to Yojimbo and Throne Of Blood which fans will find exiting. What this issue really delivers is the promise...the promised that the second issue is the one that starts this series. The characters will be all in place for an interesting relationship triangle, for finding the way of the warrior, for perils and quests etc, etc. This series starts in the second issue. What we saw here was a nice introduction to the world and really nothing more.

Samurai's Blood, can't help but imitate the previous landmarks of genre, but the book has the possibility to craft its own originality. They just need to find their own voice and style. Its an enjoyable book for fans of samurai books and movies and once you read it, it will make you want to read or watch those books or films you enjoyed. It is a love letter to the genre, but it is too early to tell whether this series will be an important work. Once you read this you might also feel obligated to pick the next issue, just to see what this book's direction is really about. Untill then wait for the next issue, let's hope is worth the wait.

Overall Score - 7.0/10
*Good - A solid book overall, might not be for everyone and does have a tendency to over expose a lot of proverbs but it is enjoyable if you skip some of them*