If you are at all invested in comic books, you know that the term “Comic Con” is shorthand for the big daddy of conventions, San Diego Comic Con (officially called Comic-Con International: San Diego). You are also probably aware, if you’re the type who frequents comic book websites, that the 2013 San Diego Comic Con begins this week and lasts through Sunday, June 21st. What you might not know is when Comic Con started, who started it and what it was like in the early years. Although anyone who braves Comic Con now has to be free of Enochlophobia due to the enormous popularity of the event, it didn’t start out this way. At the beginning, San Diego Comic Con would hardly be recognizable to those who have come to expect wall-to-wall entertainment and merchandise. In fact, when it started, San Diego Comic Con wasn’t even called Comic Con.

The first convention that would come to be San Diego Comic Con was held in 1970. There was a one-day comic festival organized on March 21, 1970 to gauge demand, work out logistics and raise enough money to present a longer convention. About 140 attendees came to the U.S. Grant Hotel to see guests Mike Royer and Forrest J. Ackerman. Due to the success of that event, a three-day convention was held later that summer. The “Golden State Comic Con” was staged from August 1st through the 3rd, 1970, again at the U.S. Grant Hotel. At this point, the organizers were able to present a rather impressive guest line-up featuring comic book legend Jack Kirby and science fiction author Ray Bradbury (Fahrenheit 451) along with Bob Stevens, A.E. van Vogt and Ackerman. The organizing committee for the first Comic Con was Shel Dorf, Richard Alf, Mike Lowry, Ken Krueger and Greg Bear. Dorf had staged a number of small conventions in Detroit during the 1960s and was looking to start something similar when he moved to California. Many of the other members of the organizing committee were friends and fans who wanted to meet their heroes. Alf was only 17-years-old during the first Golden State Comic Con and yet he was instrumental, lending the convention money and serving as co-chair (along with Krueger).

In 1971, Alf was attending the University of California at San Diego and managed to get space for the convention on campus in La Jolla, California. After this experiment, the convention found a stable home at the El Cortez Hotel in San Diego, where it would reside for 8 of the next 11 conventions. Attendance grew rapidly during the early 1970s, exceeding 2,500 by 1974, the 5th year of the event. Even more remarkable was that the organizers signed up a who’s who of comic book and entertainment luminaries in the establishing years of the convention. During the first 6 years, guests included Stan Lee, Will Eisner, Milton Caniff, Roy Thomas, Neal Adams, Jim Starlin, Carmine Infantino, Gil Kane, Chuck Norris, Mike Friedrich, Jim Steranko, Frank Capra, Chuck Jones, Walter Koenig and Charles Schulz. The year 1973 in particular brought a couple of important milestones for the fledgling show. It expanded to five days. Perhaps more significantly, this was also the year that the convention was first called the San Diego Comic Con. 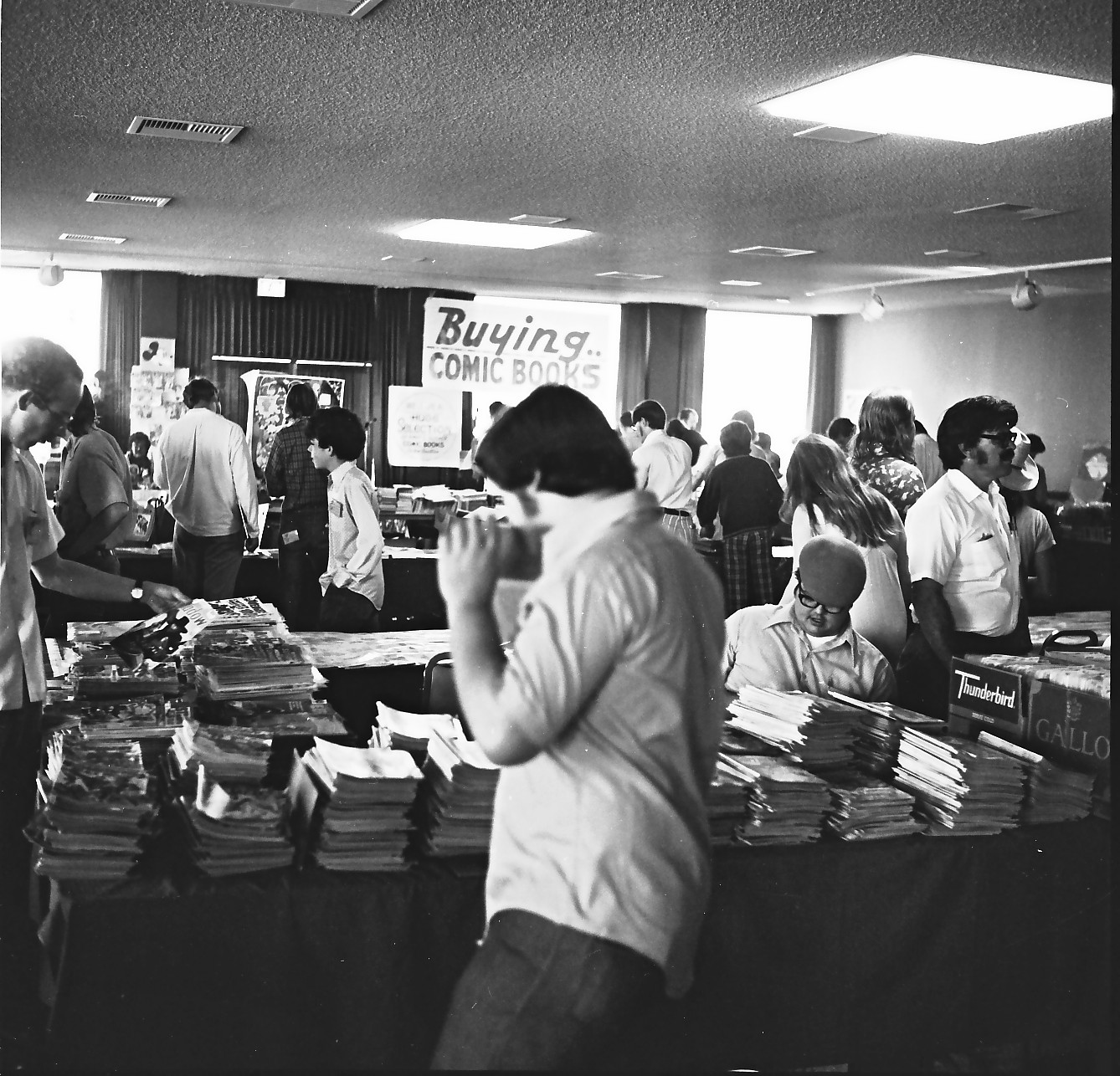 By the mid-1970s, San Diego Comic Con was a major event, and the all-start guest list continued to roll. In the comic book industry, the event started becoming a highlight of the year. Creators and publishers would network, meet their peers and see old friends. However, it wasn’t just comic books being discussed at the show. Science fiction and fantasy had always been a major element to the convention and in 1976, an upstart filmmaker named George Lucas showed up at Comic Con to promote his new sci-fi action movie, which wouldn’t come out until the following year. Although the preview of Star Wars wasn’t fully attended (Lucas had only made 2 feature films at the time, THX 1138 and American Graffiti), it was positively received, enough that a good word of mouth started to spread about the movie. Eventually, other important events came to occur at Comic Con. When the Eisners, an annual award to celebrate the best achievements in comics each year, were established in 1988, the ceremony was held during Comic Con (The Eisners have occurred during SDCC every year since). In 1991, Comic Con had grown enough that it needed more space, and was moved to the San Diego Convention Center for the first time. The show has made its home there (despite some threats to move elsewhere) ever since.

Although it was a small group that initially established Comic Con in 1970, the size and scope of the show eventually necessitated a formal organizing committee and full-time staff.  The organization behind San Diego Comic Con also operates the influential conventions Wonder Con and Alternative Press Expo, both in San Francisco. Some of the original founders of the event stay involved with the event while others went on to other pursuits. Comic Con honored the founders at a ceremony in 2009. Sadly, three of the founders have since passed away. Shel Dorf and Ken Krueger both died in November 2009. Richard Alf opened his own comic shop as well as other business ventures. He died of cancer at the age of 59 in 2012. Greg Bear became a successful science fiction writer and novelist. This year’s San Diego Comic Con, now in its 43rd year, is already sold out], with an expected attendance over 125,000. The convention has enormous influence in many industries, including movies, television, publishing and gaming. It all began, though, with a few fans with enough enthusiasm for comic books and related nerdy topics to change everything.