The Unreal Tournament games have always been solid first person shooters in their own right but Epic's powerful game engines have provided a strong platform for numerous awesome games such as huge commercial blockbusters like Bioshock or Borderlands, and smaller indie projects like Killing Floor and The Ball.

Sanctum was originally developed as one of the latter for an indie games competition but Coffee Stain Studios is bringing a full version of their game to the masses via Steam.  Sanctum utilizes the Unreal engine in intriguing new ways. It started off as an experimental mod built with the Unreal Development Kit and it combined first person shooter elements, tower defense gameplay and co-operative teamplay to create a mix of genres that will bring something new to the FPS table. 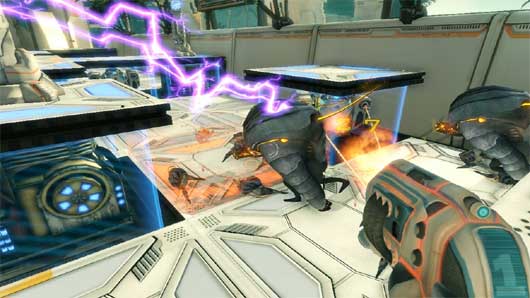 In it you play as an elite soldier named Skye who has been sent to defend her homeworld of Elysion One from alien creatures who are attacking for reasons unknown. Because Sanctum is a tower defense game it may be unreasonable to expect a deep story filled with memorable characters but in this case its acceptable because Sanctum is all about the gameplay.

Each level which is set in one of several unique and alien environments. The gameplay is split into two phases, the building and extermination phase. In the building phase you raise platforms and create towers in order to construct a maze that the waves of aliens will fight their way through.   Skye has access to numerous types of towers ranging from single target, rapid fire and area of effect turrets. She is also able to set up trap like structures on the floor of the maze such as a special tile which will slow the movement speed of any units that attempt to travel across it.

Where Sanctum differentiates itself from other tower defense games is in the extermination phase, which is where the FPS elements that have wormed their way into the game show themselves. Skye can also equip and upgrade different weapons which she can use to assist her towers in defending Elysion One. 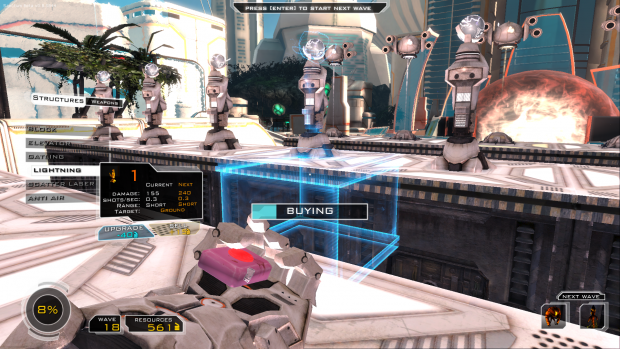 The game is also playable in co-op allowing you to work together with a friend over the internet or over a LAN. Coffee Stain Studios are using the power of the Unreal Engine to give Sanctum a cool and unique futuristic art style and UI. The art brings the futuristic world to life and adds some character to the world of Sanctum which the story fails to bring to the table.

The UI and interface of Sanctum have been designed from the ground up to be perfectly suited for the unique hybrid gameplay that Sanctum offers. You place towers via a useful hologram indicator and if you need to, the game does have the option for you to utilize a top down view.  Sanctum is being developed by Coffee Stain Studios and will be released exclusively through Steam for the price of April 16th.