No denying that there is a niche market for “inspired by a true story” films, but it's still a niche market. If such a film is going to be pulled off successfully, oftentimes it needs to be fueled by characters that can be identified with. Whether they be you or your neighbor, you buy that these characters on screen walked the Earth at one point or another. Sanctum, while having remarkable source material to work with, fails to establish its characters believably before throwing them headlong into danger.

Based on the near-death experience of Andrew Wight (who co-wrote and produced the film), Sanctum tells the story of five individuals, led by veteran diver Frank (Richard Roxburgh) and his son Josh (Rhys Wakefield) in one of the largest underground cavern systems on Earth. After a flash cyclone storm begins to flood their way out, the five of them must go deeper into the unexplored portions of cave in an attempt to follow the river to the ocean. Needless to say, not everything goes according to plan.

Before you cite The Descent to me, I'm here to tell you now: there are no little creatures roaming around in the cave to kill them. I would have welcomed that at least as it would have made the film much more tense than it was. Despite being blocked off with virtually no supplies, rising water and limited oxygen, the suspense was remarkably low. Most events worth noting could be counted on one hand. 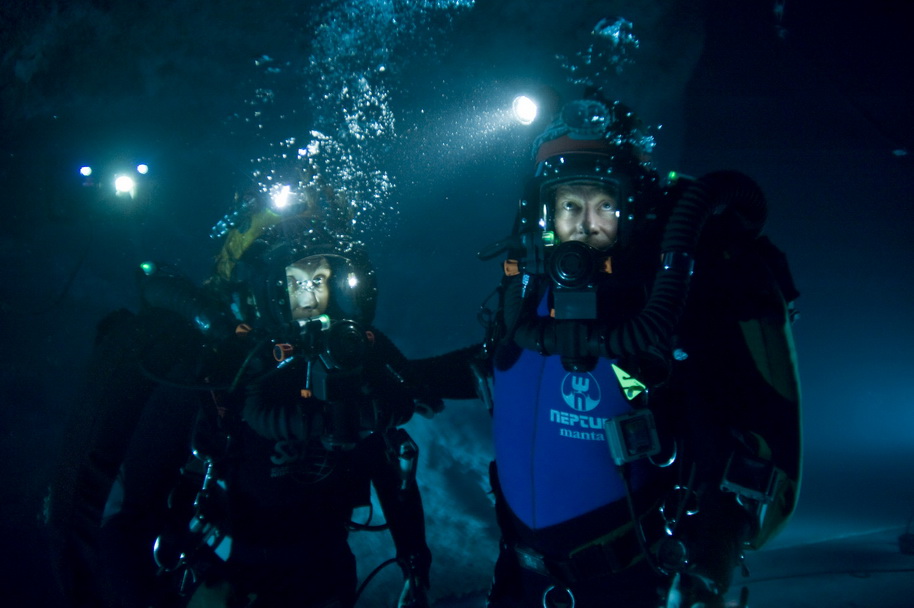 The characters are ones that you couldn't care less about. Whether it be the hammed-up script or less-than-remarkable direction/editing, there is little here to grab onto for an audience to give a damn. Supporting cast includes Ioan Gruffudd (Fantastic Four) as Frank's thrill-seeking millionaire investor and Alice Parkinson (of no fame) as his level-headed girlfriend, Victoria. While Parkinson is fine in her part (which isn't much), Gruffudd is almost laughably bad. That's the only way to describe it: bad.

If anyone here is interesting to watch, it's Roxburgh as Frank, who is an asshole, but it's okay because he knows what he's doing (sound familiar?). Still, with the film only taking place in the cave, we get little sense of the scope of Frank's life, as well as his troubled relationship with his son, a relationship given prime focus throughout the film's run. When we finally reach the end of the film (because you know how it ends) you know the film wants you to feel uplifted and inspired, but it just comes off flat. And then it's over.

On another matter, the film has an interesting production history as it came about while Avatar was being shot, developing the Fusion Camera System in the process. As James Cameron's name is all over this little picture, the 3D is actually done well, giving the audience a nice rounded picture (water effects are particularly well done). While it's nothing to break down the door to see, Sanctum is a decent argument of how 3D can augment live-action films in the little details.

Sanctum is not a horrible film and overall looks gorgeous, but there's a lot more going against it. If a film like this is going to get the end reaction it wants (“like our movie!”), we need to give a damn about the characters. This just doesn't happen, despite characters getting hurt or worse. In the end, rather than feel a loss, a viewer is more likely to say “it's a movie. They're expendable.” Not the reaction one wants to get when showing a film based on a true story but unfortunately for Sanctum, that's all they got.