Over the years The Savage Dragon has proven to be one of the most conssistent comics to entertain fans. Offering, direct action adventure, funny moments, intrigue and a lot of attitude, bundled up in a refreshing imaginative narrative. The Dragon is two years shy from hitting his two hundred issue milestone. With a hundred and seventy one issues now completed. The Dragon has no sign of getting old or repetitive. In fact this issue is the start of a very unusual story arc. The Savage Dragon is dead. Turns out he was really evil too. Now the book has no hero and no main character, so you might ask yourself what will happen with the tittle now?

Do not worry, the story continues with a brand new Dragon. Well not that new if you been following the comics. You already know that Malcom has taking over his father's mantle. He has moved from a supporting character to the main character of the book. This whole issue deals with that transition. We see how Malcom deals in a world without his father and how he has become Chicago's next defender and newest celebrity. This has caused for some undesired family to try and take advantage of this. The story tells the tale of Thunder-Head the son of Skullface. Skullface never wanted for his son to live a life of crime like he did, but harsh circumstances combined with the prejudice from being born a freak, led him to join the Vicious Circle. This of course leads to a inevitable fight between Malcom and Thunder-Head. 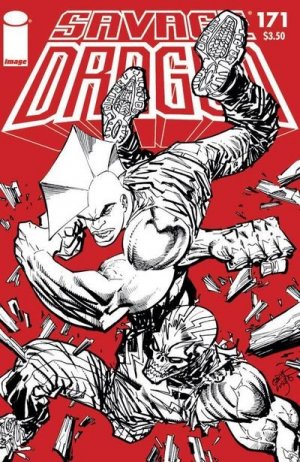 Eric Larsen has fascinated fans with over the top ideas and sharp writing. But continuing the book of Savage Dragon without the original Dragon could be a difficult task. Even if it is just for a couple of issues. This ambitious story arc could destroy the integrity of the book and could alienate fans, if the story is not handle well. But with 171 issues under his belt, there is no doubt that Larsen is the person to pull it off. Although a really short issue, it never stops being entertaining. Great characterization with some nice down-to-earth moments.

The start of this new arc gives us a chance to read a simple almost back to normal story. After all, fans could use a litle break from the previous story arc, where Dragon almost conquered the world. But don't get to comfortable because this means things are going to get crazy again.

Although it is enjoyable read, I fear that the character of Malcom is not enough to carry this book without the original Dragon. Malcom needs to prove that he can and Larsen knows that. You can notice that Larsen has changed Malcom's look by drawing his arms bigger, this makes Malcom look like he's been using steroids. But with Larsen's art style growing more similar to Jack Kirby's, it is forgivable to see him like this because it matches the book. Story wise you can notice how Larsen is trying to move his young characters into adulthood. This might looked forced but you can't blame him for that, they have to witness their father become a evil bastard and not only that, they had to fight him too.

Overall it is a very interesting change of pace for the series. The wonderful thing about the Savage Dragon book is that is populated with interesting characters and the universe they live in, is vast in detail and accessibility similar to the early age of the Marvel Universe. The thing about the Savage Dragon is that the book serves as a critique and a homage to the comic book industry yet it manages to reinvent itself after every big storyline. Playing with both classic comic book situations as well as modern ones. Right now the book mirrors the story of the new hero taking over the mantle of the old established hero (like the current Batman with Dick Grayson or Bucky with Captain America) its a theme that is done to death in comics especially with those characters that have been around for sometime. But there's one thing I know, with Savage Dragon you have to expect the unexpected. Whatever plans Larsen has for Malcom we don't know. It could be anything, but as a reader the question is how the hell is Larsen going to bring the original Dragon back? Since we discovered that all this time he was really a bad guy? I guess we just have to wait and read.

Overall Score - 6.7/10
*Satisfactory - A title that's not for everyone, has a few stand out moments. But is missing the original Dragon. If you are not a fan and have a few extra bucks it's worth picking it up*