By: Sean Elks | Comic Reviews | June 16, 2012
Scarlet Spider recovers from its strangely poor previous issue that read like filler, getting back on track with the ongoing story of Kaine in Houston. But as much as I do enjoy this series, there’s always this frustration factor as it seems to consistently come up short of reaching the level of awesomeness it’s really capable of. This issue is no different. Ana Kravinoff returns to plague Kaine’s life in a story that also manages to hit on just about every problem I’ve had with this series.

Kaine has begun to settle into his role as a hero in Houston and even grudgingly begun to accept that people are going to insist on calling him Scarlet Spider thanks to his predominantly red costume. In a funny moment, he notes that the reason he chose the costume is because he liked the black and is annoyed that no one seems pay attention to that element of it.

This issue returns in a big way to the subplot of Aracely, the girl Kaine saved from a shipping container in the first issue. There were indications before, but this makes it very clear that there is more going on with Aracely than it originally seemed. She is clearly either telepathic or in possession of some abilities that have the same effect. This brings up a lot of interesting questions about the character. Where does the power come from? Did that shipping container just happen to contain a superhuman, or were superhumans being trafficked and she’s just the only one to survive? What are the things she doesn’t remember? Along with all this, her openness and energy give her a good dynamic with Kaine’s dark seriousness.

Ana versus Kraven turns out to be a good fight scene delivered by Chris Yost and Ryan Stegman. This really isn’t a surprise, though. Yost and Stegman really should get a lot of credit for the action scenes they put together in this series. They tend to go several steps beyond what a lot of other creative teams do when it comes to fights. Kaine’s personality always tends to shine through how he fights, which is how it should be. 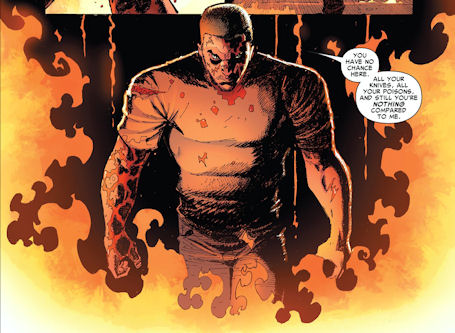 That said, Ana Kravinoff does bring up something this series has been guilty of, which I’ve pointed out before. There really does seem to be this expectation that readers of Scarlet Spider are also readers of Amazing Spider-Man. If you haven’t read the Grim Hunt story in Amazing Spider-Man from a couple years back, Ana’s sudden appearance is probably confusing. Grim Hunt happens to be one of the few Amazing Spider-Man story arcs from recent years that I have read fully, so I kind of lucked out here. I know who Ana is, and I know her and her father’s history with Kaine. If you don’t, this issue doesn’t offer you much help. There is a small narration box quickly summarizing Kraven's resurrection and Kaine's death. I'm not sure whether it would answer a new reader's question or just give them several more, though.

This issue also takes an awkward detour down Redemption Lane. Since the series began, Yost has played a little too heavily on the idea of Kaine seeking redemption. Come on. Do we really care to see Kaine redeemed? Honestly? Isn’t the whole point of this series that he is NOT Peter Parker? I really don’t care to see Kaine whine to a priest about his dark days. I don’t want to see him getting all weak-willed about killing. This book would be better off if it dropped most of the redemption junk and played to the dark Spider-Man premise that it’s hyped on.

Though to be fair, the priest’s reaction to Kaine’s name is a funny moment.

And then there’s the Mary Jane clone. I’m sure Annabelle Adams is a great girl and all, but can we just skip this? We get it. Kaine is attracted to someone who looks like Mary Jane. It’s really not clever and has virtually no interesting mileage to it. So can we just not do this? I really think the only thing that could be done with her that would be at all interesting is killing her so Kaine will quit moping about being a killer and kill some people. That’s right. I’m saying go ahead and shove her in a refrigerator. Tell me I’m wrong.

This is apparently Ryan Stegman’s final issue on the book. I’ve given his run a bit of a hard time. He’s a great artist whose style I don’t think was very well suited for the tone of this book. That said, he’s going out strong here. There are a lot of great panels in this issue. As I’ve already said, the fight with Ana is really well done. And you’ve got to love that awesome cover.

With both Kraven and Madame Web making appearances in this issue, this story seems like it’s being set up as a sequel to Grim Hunt. This is fine by me as that is one of the few recent Spider-Man stories I’ve actually liked, even though I don’t thnk bringing Kraven back to life was a smart or worthwhile move on Marvel’s part. The idea of him going up against Kaine is a fun one, though. I just hope Yost will do a better job of making readers who haven’t read the story feel welcome.
Rating
8.1