Scott Pilgrim vs. the World Review

By: Steven Chaitman | Movie Reviews | August 14, 2010
Steven's Rating: 8/10 Player Affinity Composite Rating: 8.0/10 (3 reviews total) As I left Scott Pilgrim vs. the World, a woman probably in her 40s or 50s exclaimed into her cell phone how it was the worst movie she's ever seen. I rather liked it, though I'm definitely 20-30 years younger than she. That kind of split is evident of only a few films in cinema history: those that are radical and progressive. "Scott Pilgrim" is both. "Scott Pilgrim," based on the comics by Bryan Lee O'Malley, marks the third major feature for director and co-writer Edgar Wright, whose Shaun of the Dead and Hot Fuzz practically turned the definition of the word "genre" on its head. "Scott Pilgrim" is five times as ambitious, a psychedelic montage of hyper-pop culture, fusing together romance, three decades of video games, fantasy and alternative rock. Are Wright and Universal crazy or dead-on? Our titular character, played by this generation's arguable embodiment in an actor, Michael Cera, is 22, lives in Toronto and plays bass in a band called Sex Bob-omb. He lives in his gay friend Wallace's (Kieran Culkin) apartment and doesn't pay rent and is easily smitten by ladyfolk. After dating a high schooler named Knives Chau for a little while, Ramona Flowers (Mary Elizabeth Winstead) comes into his life. His desperate attempts to win her affections work, but she comes with baggage: seven evil ex-boyfriends (and yes, one girlfriend) who possess various powers and have formed a legion bent on killing him. He must defeat them all. Welcome to the cutting-edge of contemporary entertainment. You can call the current youth the "A.D.D. generation" and it might well be justified, but "Scott Pilgrim's" flashy style-heavy approach isn't to compensate for young people's warped attention spans, but to embrace new forms of entertainment made possible by today's multitude of stimulation. 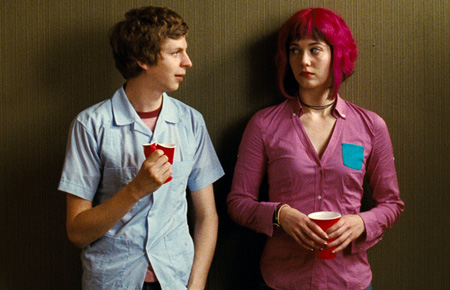 The film is foremost an homage to video game culture. If you love video games, "Scott Pilgrim" piles on the references from fighting games such as Tekken to bits from the Zelda games soundtrack. Scott's pick-up line to Ramona is about the origin of the name Pac-man. Wright's style draws on classic gaming imagery like low-bit CGI, comic book illustration, anime and more. Someone younger will gel with that, but someone older might find it total overload. If our normal, hum-drum lives took place in a world with video game or comic book rules, it would look like this for sure. Fueling it all is a wild imagination: at one point Ramona pulls a giant Donkey Kong-sized sledgehammer out of her purse, echoing countless fantasy games where characters carry around weapons but you never see it on their person during gameplay until its being used. One scene even spoofs Seinfeld and other notable sitcoms, when Scott comes back to his apartment and a laugh track accompanies his interplay with Wallace. The scene ends and no more sitcom references. That's how quickly scenes come and go. The transitions are abrupt, with scenes going from one place to another sometimes in seconds. There are no drawn-out dramatic conversations, just bursts and vital snippets with occasional graphics and unique style shots. The style over substance argument reaches an interesting crossroads with "Scott Pilgrim." Although immensely fun and filled with wry humor and defied expectations, those who look for purpose in all the pop-up graphics and visual shenanigans will have trouble seeing the point in all this. There are times when the love triangle story between Scott, Ramona and Knives becomes lost in the video-game narrative of defeating the evil exes. "Scott Pilgrim" is a very good film not because it beautifully ties substance with schmaltz, but because it entertains in a fun, impressive and completely unique fashion. This is easily the first film to recognize the effect of cross-media: how images, special effects and music all converge for our entertainment. For younger audiences, these multiple media are part of daily life. Sound and imagery are synonymous, whereas the film and music industries were miles apart decades ago. This has nothing to do with age, but young people can process so much more at once, which makes "Scott Pilgrim's" appeal fresh and new. Those who prefer the cake over the icing will only be able to enjoy "Scott Pilgrim" to a point. But we're talking ground-breaking rainbow-colored frosting with sprinkles. No words can describe the kind of entertainment the film offers because it's just that new and fresh. All the way down to the film's openness with homo (and bi) sexuality as embodied by Culkin's excellent portrayal as Wallace, the movie is progressive and unconventional. There's certainly room to go up from here in terms of quality, but for now, the novelty of "Scott Pilgrim" and how in-tune it is with contemporary society warrants it much praise, even if it's not for everyone. Rating: 8/10 Scott Pilgrim vs. the World Directed by Edgar Wright Written by Michael Bacall and Edgar Wright, Bryan Lee O'Malley (comic) Starring: Michael Cera, Mary Elizabeth Winstead, Kieran Culkin  Other Player Affinity Reviews
Rating
8.0