Scott Pilgrim vs the World the Game Review

Scott Pilgrim is doing pretty well right now for a story that is based on an independent comic book series. The final book in the series came out recently, it has a great and entertaining film (go see it by the way!), and now we have Scott Pilgrim vs the World the Game! However is this just another cheap buck, or is this a trifecta of awesomeness?

Scott Pilgrim is in love with Ramona Flowers...there's just one problem. He must defeat her seven evil exes. This is about all you get out of the games story. Though honestly you really don't need a deep story for an old school beat 'em up like this. I do recommend at least seeing the movie before you play, but if you have the time I'd easily recommend the comics. Again this is really just optional since the most story you get is in the opening. Which disappointed me since at random points you'll see iconic characters from the comic/movie standing around, but you can't talk to them at all. 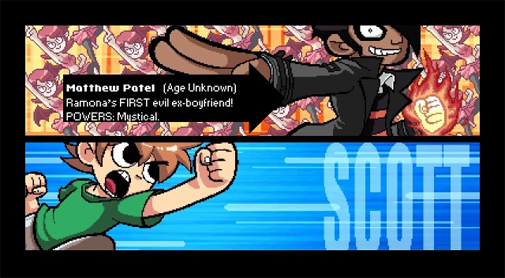 The game plays out like an old school beat 'em up, but has RPG elements. Such as gaining XP from fights, but also through items found in the many shops run by Scott's friends (and an enemy or two). Though the items can be bought multiple times for the same boost. With each level gained however you learn new moves to beat your foes with. This all can be done very fast in the game which can make the game pretty easy near the end, but these stats do not transfer to the 3 other characters that are playable, This allows you to go back, and grind up all over again. You can do this together with friends, but the game is local multilayer, and features no online at all. A disappointing fact especially since the Xbox 360 version was delayed two weeks.

The game follows the standard beat 'em up formula. You run down a path filled with bad guys, and at the end the boss is waiting for you. However you can take short cuts through subspace, and take the form of corrupted versions of levels from other games. These zones don't take you too far, but are an easy way to earn cash. 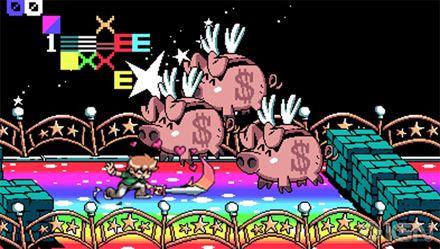 Overall this is a fun experience. I'd say the gams is a bit of a toss up. If you are a fan of Scott Pilgrim already, this is more than worth the $10. However if you have no knowledge of Scott Pilgrim (shame on you) you will probably only find a beat 'em up that might not hold up as well as the Turtle's in Time arcade title (which does have online I should mention). The biggest issue is the lack of online co-op. The game would have been much more fun playing with my friends without having to drag them into a car, and bringing them to my place. In the end it's still a great movie tie in, and is acceptable as long as you know what you're getting into.