"A uninspired horror comedy that tries to be cool, but isn't."
By: Kim Perry | Movie Reviews | November 2, 2015
There is a lot that could be said about Scouts’ Guide to the Zombie Apocalypse, but there is more that cannot be said about it, such as it being funny, original, or interesting. The scouts’ are three stereotypical high schoolers. Ben, the soft-spoken everyman, Carter, the wisecracking horn dog who has trouble keeping quiet, and Augie, the overweight super scout who seems so level headed it makes you wonder why he’s actually friends with the other two. Augie is getting a brand new merit badge, so the three are camping away from town tonight in order to celebrate. Carter and Ben try to sneak away for the night to a party, and when they return the zombie plague has taken over. They are joined in their adventure by Denise, a former student turned stripper whose character is completely unnecessary for this film, and hijinks ensue. 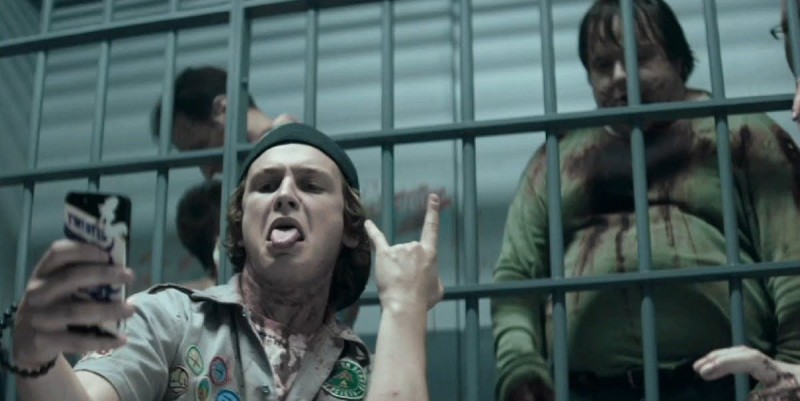 The flaws in Scouts’ start from the very beginning. There’s an elaborate dance sequence with a lab janitor (Blake Anderson from Workaholics) who is then eventually turned by a zombie being held for testing in medical lab. The janitor attacks the scientist on duty and we assume that this is how the apocalypse begins. We do not hear anything about this sequence for the rest of the movie. We see the beginning of the zombie attack when they boys enter an empty strip club and are attacked. Denise comes out of nowhere not only unharmed, but with full awareness of what’s going on and the ability to shoot a rifle with perfect aim. There are quite a few plot elements in this movie that is supposed to be a movie about boy scouts’ killing monsters. Ben has a crush on Kendall, Carter’s sister, and must muster up the courage to tell her how he feels about her. Carter and Ben want to leave scouts, and leave their friend Augie on his big night to attend some senior party. Kendall’s boyfriend gives them them the wrong address and they have to go back to Carter’s house to search her room to find a journal that contains the right one.  The scout leader is missing and they are not sure if he has been harmed or not. Please stop! It’s a zombie movie, it’s enough. 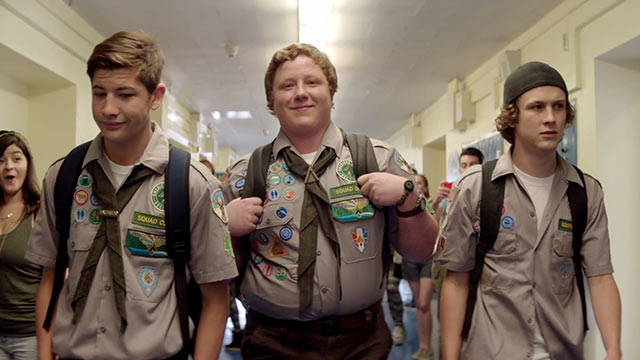 The most disappointing aspect of this movie is that it really did not have to be that good in order to be entertaining. You do not go into a movie like this expecting very much. All you need is some scouts using their badge earning survival skills to come up with new and interesting ways to kill zombies. A couple of sight gags, maybe some fart jokes and you’re good. But that did not even happen. The jokes just throughout most of it were just forgettable. There is one scene at the senior party that is supposed to pay homage to the most famous moment in the cult horror film, Re-Animator. And even if you did not see Re-Animator, it’s supposed to be still pretty cringe-worthy. Here…nope…nothing. Scouts’ Guide to the Zombie Apocalypse is not really watchable until the last act. The act where the boys actually get their balls and fight the zombies that have taken over senior party, or the main attraction of the trailers and posters. Its rated R for nudity, language, and violence. But it seems as if the director had a PG-13 script and added some rated R elements for shock value. Scouts’ is not completely horrible, but most of is not funny, badly written, and badly directed. If you decide to watch this you can bypass Netflix. You can just watched the edited version that will air on basic cable in about six to eight months.
Rating
2.4
Pros