By: | PC News | April 26, 2011
A pair of screenshots from Mass Effect 3 have been released today which show Commander Shepard fighting a new enemy type, Armored goons from Cerberus.  The shots give players a look at these mooks in combat, as well as showing a nice close up of what their armor, weapons, and helmets will look like.

The first shot doesn't give much in the way of details; it's an over the shoulder angle with a pair of Cerberus troops in the distance firing on Shepard, Not much new information can be gleaned from this image since Shepard and the muzzle flash from his gun obscure much of the screen.  Although fans might notice that the location where they're fighting looks a lot like Citadel Station.  Is this what that classic Mass Effect locale will look like when running on the ME3 engine? 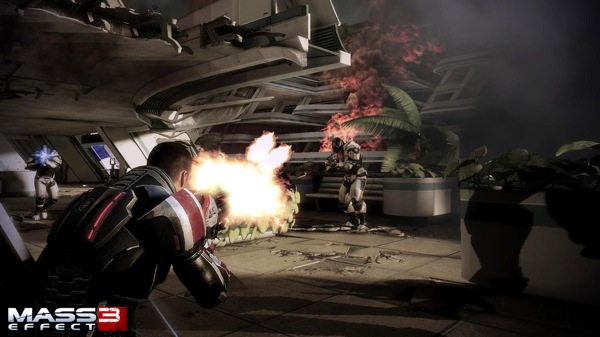 Next, Electronic Arts gave a nice close-up look at a trio of Cerberus soldiers in a tight formation which looks cool enough to be a recruitment poster.  Note the intimidating red glowy eyes on the Cerberus helmets.  We can also see their weapons fairly clearly, and hardcore fans might be able to speculate on what sort of gameplay will come from these. 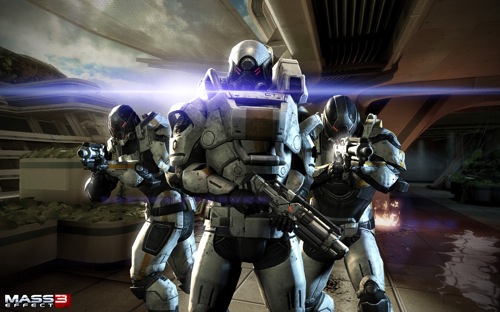 There's no HUD or user interface in the screenshots, which means we still don't know the game will blend its Shooting with Role-Playing elements.  However, one thing we can be certain of when examining these is that Mass Effect 3 is going to look great.