By: | Movie News | December 12, 2011
While you're busy counting down until the release of The Dark Knight Rises prologue ahead of Mission: Impossible - Ghost Protocol IMAX showings this weekend, the Christopher Nolan camp has released a second teaser poster to marvel at.

The first poster released back in July is hard to top with the bat logo in the skyline of a crumbling city, but this one isn't bad by any means. Seeing as the only quotes anyone has been able to get about the film are that it rounds out Batman Begins and The Dark Knight like a trilogy, the "the legend ends" tagline makes sense. Considering broadcasting "the end" was the very tactic Warner Bros. used to market Harry Potter and the Deathly Hallows Part 2 into a walloping success, it's no surprise to see it here, though you can bet the studio is not done with Batman films any time soon — Nolan or not — so it's a bit bogus.

Bane (Tom Hardy) walking away from a shattered Batman (Christian Bale) visage certainly evokes Bane's infamous "Knightfall" comic story line where he breaks Batman's back. If there was any doubt that Bane would push the Caped Crusader to his physical and mental limits in this movie, they're settled here. I have a feeling we're in for a big surprise of some kind at the end of this one. 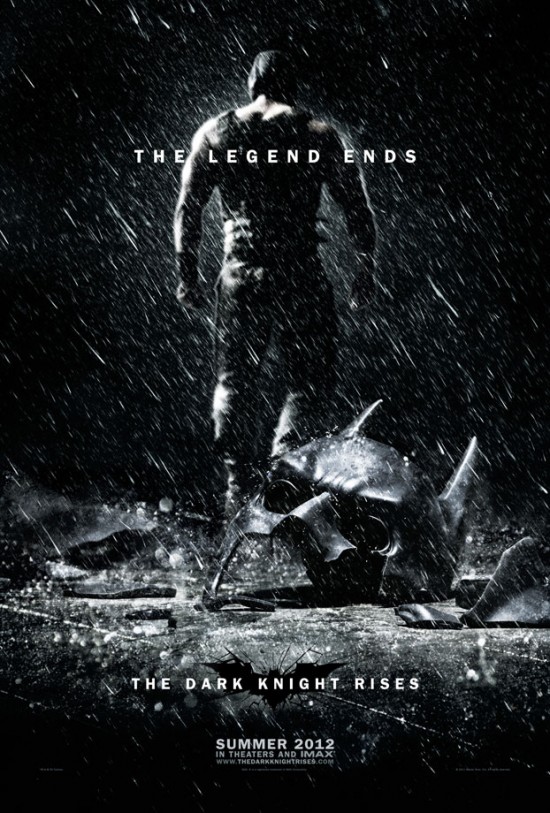