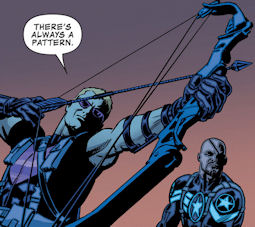 The latest Marvel NOW! relaunch comes to us in the form of Secret Avengers by the new team of Nick Spencer and Luke Ross. It’s a strong return to the covert operations foundation of the series that was started by Ed Brubaker, but it doesn’t simply try to replicate what Secret Avengers used to be. Spencer wisely eases us into his new direction for the series by kicking things off with a small cast in a self-contained adventure.

We begin with S.H.I.E.L.D. agent Phil Coulson recruiting Hawkeye and Black Widow into the new covert unit that will serve as the series’ team. Right away, some of my reservations about this series are put to rest. I was no fan of the Battle Scars limited series that brought Coulson to the Marvel Universe. Why? Many reasons. But to stay on topic, what tried to pass for Coulson in that series was not Coulson. That was some beefed up, action hero using the same name but bearing no actual resemblance to the cult favorite character from Marvel’s cinematic universe. While I personally had no vested interest in seeing Coulson brought to comics, I still couldn’t understand what the purpose was behind giving readers a Coulson so unlike the one in the movies. Thankfully, Spencer and Ross rectify that mistake. Their take on Coulson is far closer to what fans of the character know from the films, and having that extra bit of distinct personality from a character goes a long way toward making his scene with Hawkeye and Black Widow more interesting.

What finally makes the two Avengers agree to take part in a program that will regularly see their memories manipulated is hidden from us in a little narrative device that I really like. A panel from the page is redacted with a big blocked letters saying as much. I love it. It’s such a small thing, but it thematically fits the series so well. I actually hope to see more panels REDACTED as the series goes on. This is Secret Avengers. Why not embrace it having secrets flaunted in our faces?

The one glaring weakness -- and what my main reservation was -- about Secret Avengers is Marcus Johnson, who this issue flatly states is Nick Fury and we should just deal with it. Except he isn’t, so I’ll just continue to refer to him as Marcus. Last I saw, Nick Fury was over in Winter Soldier. I don’t feel like taking part in Marvel’s confusing and amazingly poorly thought out attempt to give us a black Nick Fury like in the movies by having the real Nick awkwardly replaced by his black son. It really is probably one of the dumbest ideas currently floating around in comics, and it’s a shame Secret Avengers has to bear the burden of being its latest vehicle.

That said, Spencer actually writes Marcus well. Obviously, it would be so much better if Marcus were just allowed to be his own character, but he’s handled well as the field S.H.I.E.L.D. agent of the team, especially with the twist in this issue. It really sets the tone for the places this series might be heading. I do think a better character could have been used, though. As well handled as Marcus is here, virtually any other S.H.I.E.L.D. agent would have worked just as well. Plus, they wouldn’t suffer from how hard Marvel is trying to push Marcus on us. Besides the whole Nick Fury thing, there’s also the strangeness of his costume. Hey, I love Steve Rogers’ Super Soldier uniform. I wish he could’ve kept it for longer than he did. But I don’t see the non-artificial marketing reason for passing it on to Marcus. He’s just a field agent for S.H.I.E.L.D. Why the special costume instead of the uniform? 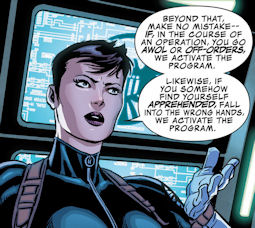 The new emphasis on S.H.I.E.L.D. in Secret Avengers is probably what has me the most interested in Spencer’s relaunch of the book. As a huge fan of Secret Warriors, I’ve been waiting for some real follow-up to the new S.H.I.E.L.D. that emerged at the end of that series. No other writers have really seemed to tackle that matter in any substantial way, though. It looks like Spencer’s going to change that here, even including an appearance by one of the Secret Warriors. Now that really thrilled me, even though it was just a quick appearance.

Ross does some great work on the art. Marvel made the right choice with him. His style is a great fit for the tone of Secret Avengers, and it seems like he has a strong handle on the cast members so far. There’s some really nice body language and facial expressions, and it’s attention to details like that which you just don’t see in enough comics.

Secret Avengers with Spencer and Ross gets us back to the espionage themes that I’ve always felt got lost during Rick Remender's run with the series. It may become the next best thing to having a S.H.I.E.L.D. series as well. Best of all, it’s a Marvel series where Spencer can finally succeed like he should. Because let’s be honest. Books like Iron Man 2.0, Ultimate X-Men and a Cloak and Dagger limited series were never going to be big. Secret Avengers is something that can let his writing shine, though.