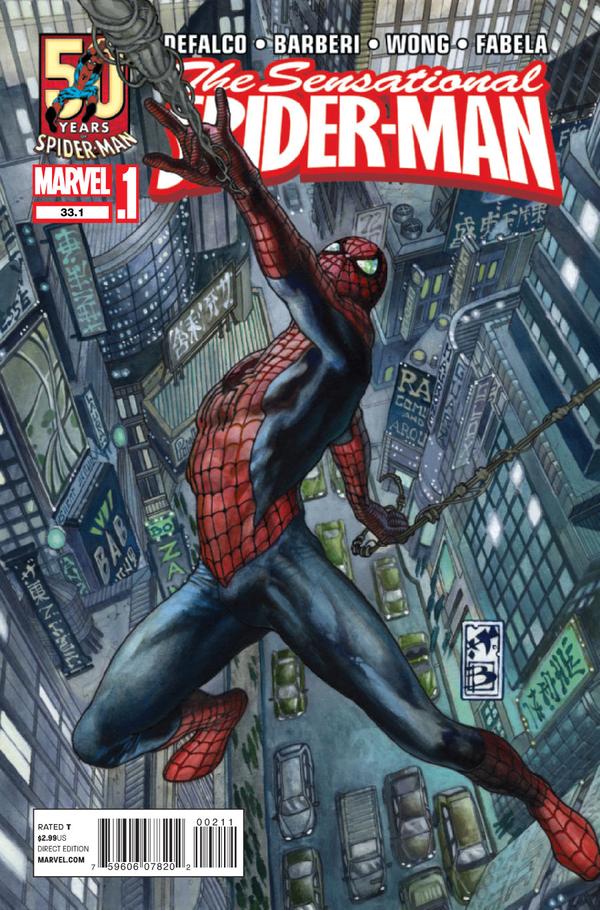 Spider–man’s 50th anniversary is being celebrated this month by having one-shot stories from different cancelled Spider–man titles. This week it was Tom Defalco’s turn to give us an anniversary story for Sensational Spider–man.

The cover for this issue was pretty good. The art was really great. Even though the concept was kind of plan the art made up for it. It was a great for an anniversary issue.

This issue brings a new villain into the story. Carlie and Peter have to find out how to defeat this villain but they will have to figure out what this villains' motives are before someone gets hurt.

The last anniversary issue was pretty weak. So, I was kind of hesitant to pick this issue up. But I was excited to pick this issue up at the same time because I love Tom Defalco’s writing. So, this could have been a hit or a miss for me. It ended up being a miss. Nothing really happened that could make me say that this was a great issue to celebrate such an important comic book character.

The villain was really poor. I didn’t care about him, and we didn’t learn anything about him. Hopefully his character gets a little bit more developed for the 33.2 issue that comes out this week. It may have been smarter to pick a more known Spidey villain for an anniversary issue.

Another problem was that Spidey was hardly in this story. This is an issue that was supposed to be celebrating his character, but it was mostly about Carlie. Not saying that the Carlie story was bad because I actually did enjoy her a lot better in this comic than I do in Amazing Spider-man, but there should have been more Spidey.

The timeline was a little confusing in this issue. In the Amazing Spider-man series Carlie dated Peter for a little while and knows he is Spider-man. But with this story Carlie doesn’t know Peter that well and does not know he is Spider-man. So, they should have stated during what time this story took place.

If you are a fan of Carlie’s character than you may like this issue, but if you want to see a good Spidey issue than this issue might be worth skipping. I am going to pick up part 2 only because I wanted to get all the anniversary issues, but I hope this story improves.