Shadow Harvest: Phantom Ops has a lot going for it.  It combines old-school shooters with stealth gaming to put players in control of two operatives who try to take down bad guys in the year 2025.  Because it’s set in the near future, it gives gamers access to sci-fi spy equipment, while also employing cover-based gunplay.  However all of these great ideas don’t pan out due to numerous tech issues, and some bad design choices.

Shadow Harvest: Phantom Ops has two protagonist, and players will spend an equal amount of time controlling each of them.  One is Alvarez, a standard commando guy who shoots bad men with his guns.  He also has other obligatory shooter abilities, like bullet time, night vision, and he can peek out around corners to shoot while taking cover.  There are also a few stationary turrets which Alvares can use, and some on-rails sequences which put him in a turret on top of a moving vehicle. 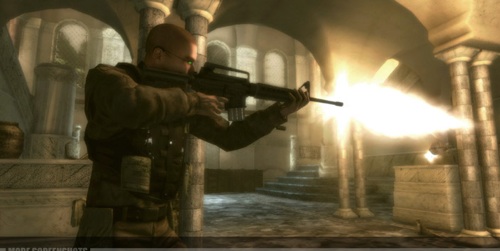 The other agent is Myra, a slinky assassinatrix who wears a high-tech suit that can turn her invisible for short periods of time.  She fights with a crossbow, and can use melee combat for stealth kills.  Her crossbow can fire ordinary arrows, along with an instant kill projectile, and noisemaker arrows that distract guards.  Players familiar with the Splinter Cell games will feel at home with Myra, and anyone who plays third person shooters will know the deal with Alvarez.

Players will alternate between these character for the first few levels, then end up with both agents at once, alternating between at will during the missions.  Individually, the game fails to bring anything new to the table for these genres, but Shadow Harvest deserves some praise for combining the two in one game.  Unfortunately the way that Shadow Harvest does so is terrible, and that’s not the only problem with the game. 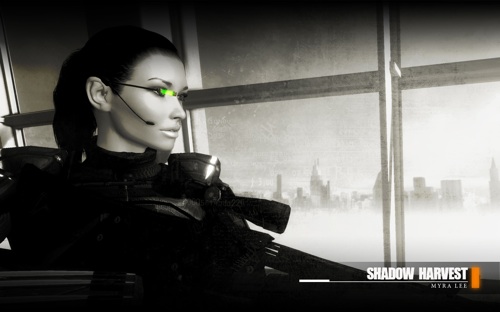 You can only control one character at a time, but there is virtually no AI to handle your partner.  The other character has basic functionality, and will retreat when attacked, and fight when cornered, but you can’t get your partner to follow you, use their special abilities, or engage in any sort of aggressive action.  They are essentially just parked somewhere like a helpless kitten while you’re off trying to complete the mission with the other character.  Making this worse, if one character dies, your mission is over and you have to restart from the closest checkpoint.

Yes, checkpoint.  There is no manual save feature, and some levels later in the game have checkpoints that are just plain too far apart.  Adding to the tremendous frustration is the fact that there are unskippable cutscenes following many of these checkpoints.  Making that worse still is the terrible voice acting for Alvarez, the main character.  Shadow Ops would deserve a much higher score if the checkpoints had been closer, the cutscenes could be skipped and a better voice talent had been given the lead role.  Simple design decisions like this turned an otherwise decent game into a bad one.

There are some other issues that contribute to Shadow Harvest’s problems.  Plenty of sequences involve trial and error tactics that pretty much guarantee that you’ll die on the first few attempts at locating some special item within a time limit.  There are also a few grievous bugs, including ones that get your character stuck in invisible walls, making you restart from a checkpoint.  The AI flaws don’t end with your partner’s AI either; all of the enemies are pretty stupid too.  On several occasions enemies actually killed each other while trying to shoot me.  They’ll also cluster together near doorways, making easy pickins for a grenade; and frequently they all follow the exact same path when attacking, like a row of ducks in a shooting gallery.

It feels dated as well.  Instead of the modern regenerating health system, this game uses old-fashioned medikits to replenish health.  It also uses the old health meter to indicate how close you are to dying, rather than the current visual and audio cues, like the bloody screen, or beeping force field.  Then there are the other power-ups;  Myra’s suit can only be recharged by special blue glowy things that the enemies always conveniently have lying around their bases.  There’s nothing wrong with these old design ideas, but they certainly don’t help overcome Shadow Harvest’s problems.

While it is a bad game, fans of the two respective genres might be willing to forgive Shadow Harvest for its faults, and take a fair share of enjoyment from it.  The frustration doesn’t set in for a few hours at least, and I did have a good time with it for the first handful of missions.  Shadow Harvest: Phantom Ops is the first game by its developer Black Lion Studios, and they definitely shows promise despite this mostly failed effort.