"Fast, free and easy-to-use," says Nvidia. ShadowPlay is a new approach to gameplay recording, utilizing an on-board H.264 encoder built into GeForce GTX 600 and 700 Series graphics cards. I overview this new update to see if it has any weight behind its bold claims.

I've been PC gaming for ages now and indeed, my YouTube channel is filled with loads of gaming moments from my live streams on Twitch, and in game from recorded footage using DXTory. Well Nvidia has released its new software known as ShadowPlay which could quell the need to use this 3rd party software. Nvidia ShadowPlay is a hardware accelerated recording utility built for Windows operating systems using Nvidia 600 and above series and above graphics cards. It is similar to programs like Fraps or Dxtory which uses software to record the game screen you're currently playing, but with ShadowPlay it uses dedicated H.264 video encoding hardware found in 600 and 700 series graphics cards. This allows the performance impact on a computer to be much less than a software solution where users can sometimes experience half of the frame rates of games they are recording due to the high overload on the systems CPU and GPU. ShadowPlay can be configured to record continuously with a 20 min rolling buffer, allowing the user to save the video retrospectively if something interesting has happened in their game, without having to remember to start recording beforehand.


The good news is Nvidia ShadowPlay is free for all owners of 600+ series graphics cards and will make it really easy for those who don't really understand screen recording to get to grips with it which will encourage more people to record their games and more gaming content to go online. It was supposed to be released alongside Nvidia Shield in late June 2013, but had been delayed. It was also later planned for release by the end of summer 2013, but again the release was silently postponed. However it was finally released along with the 331.65 driver, available to all Graphic cards higher than the 600 series.

So jumping into the nvidia control panel itself the "Shadow Mode" follows your gameplay and saves the last ten to twenty minutes of action to a temporary buffer on your hard drive. You can then hit Alt + F10 to save the buffered footage to a permanent file. What's really great is that to prevent your HDD from filling up with large video files (something that really bugs me!) the video files are not created automatically and ShadowPlay saves a clip only when you press the hotkey which is a really great feature.


The footage you do save can subsequently be edited with any popular editors like Sony Vegas, Adobe Premier, Final Cut Pro, the list is endless. You can also upload to YouTube straight from the dash which makes it really easy to share online. Nvidia has said in a future GeForce Experience update we will introduce Twitch streaming that will enable ShadowPlay users to stream captured gameplay direct to Twitch which could end the need for 3rd part software like Xsplit and OBS that I use when live streaming on twitch.


ShadowPlay uses the H.264 hardware encoder found on GeForce GTX 600 and 700 Series graphics cards to record 1920x1080, 60 frames per second which is indeed in the upper tier of video recording quality which is a very good thing. It means your footage will not be choppy and will seem fluid throughout. All DirectX 9 and newer games are supported. In comparison to software solutions that hammer the CPU, ShadowPlay’s hardware solution has an approximate 5-10% performance impact when using the max-quality 50 mbps recording mode, and by saving to automatically-encoded and compressed H.264 .mp4 files, ShadowPlay avoids the disk-thrashing, humongous, multi-gigabyte files associated with other gameplay recording applications. 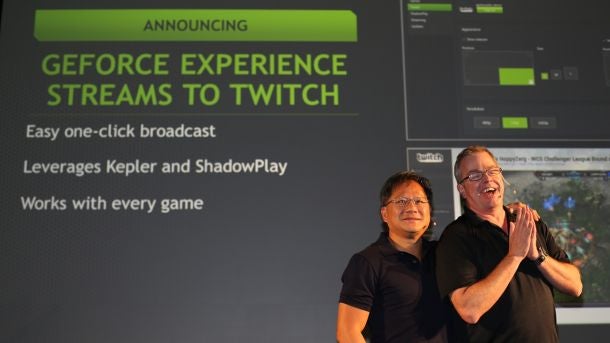 It looks like Nvidia is trying to corner all parts of the PC gaming market. I wonder if AMD will respond with anything for its Catalyst Control center software? For now you can check the video below which shows off some of the cool features of ShadowPlay and I will definitely be bringing a hands-on video when the Twitch integration is released. There's no excuse now not to share your gaming with the world. Nvidia has just made it plain easy!