Normally this would have fallen under the banner of a review, but I realized that a story that have been over 13 months in the making deserved something more. So this grew out of being a simple review to an overview, a retrospective, a reflection on what exactly has happened to one of the most beloved and innocent characters in the DC Universe since the advent of the “New 52”. For surely it has to be far more than some might believe it to be.

In the grand scheme of things there has something that has never been credited to Shazam! in all of the months since the beginning of his story all the way back in Justice League #7. That he has to have undergone the most thorough change in character, mythology, and overall trappings in the entire “New 52”. Whenever there are complaints about how different a character has become due to the reboot "Shazam" is sorely overlooked amongst more others when he should be on the top of the list. While many touted a lot of Superman’s changes, for example, let’s do a tally of what he got to keep and what Billy Batson did not. Superman got to keep his city, he got to keep his supporting cast, he got to keep his overall basic backstory and the various hallmarks within – to put the bold point on this issue, Superman even got to keep his name.

Billy Batson, whose alter ego is now “Shazam,” has pretty much none of those anymore. They’ve all been replaced by all new ones, or still there but now part of a larger more varied tableau. With a new city, new side characters, new name all of this was even more compounded by the fact that at the start of this story Billy Batson, the everlasting golden age hero, was a very different character himself. He was petulant, obnoxious, abrasive, and all around rude. To say that the first chapter of Shazam! was a “base breaker” would be putting it extremely lightly. The furor across message boards all around was a sight to behold. I will not deny that I was a part of those masses that decried the first installment, which tried too hard to distance itself from what had come before – blatantly so.

Yet what we all didn’t see at that moment, something that would take months until everyone saw it, was that DC Comics and Geoff Johns weren’t giving old time fans the finger, but pointing the way. If everything was changed and moved around then there had to be a singular constant – Billy Batson had to be the same. That was what was at the core of this entire tale – the maturation of the spirit of Billy Batson. To contrast the simple heroic soul at the heart of the character with the now more embittered backdrop would be put the spotlight on it. Billy was showcased primarily as a roughed up aggressive boy, but even by the second installment in Justice League #8 there was the stirring of something more, something deeper. By the third it was clear – he wasn’t bad, or distant, but a lost boy in search of hope, so he would become the embodiment of that hope. 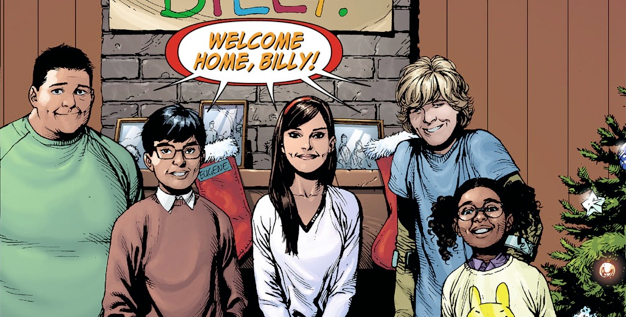 Now when I state that the world around Billy is “dark” and such that is not meant to mean that it is so entirely for even around him were the signs of what could be. Whatever changes Billy was going through before he could grow into his own were counterbalanced by some of the most incredible supporting characters introduced into the “New 52” – the colloquially called “Thunder Kids”. The blatantly, and yet sweetly, multicultural foster family that Billy finds himself a part provide the old style sensibilities that Captain Marvel used to embody. They’re the innocent, relatively, with a cute Brady Bunch charm to them, but on a deeper level they are the forbearers of perhaps the preeminent theme that Shazam! has to offer – that of family. Given that throughout the decades this has always been at its core the story of an orphan boy trying to do what is right then the idea of “family” has always been prevalent.

Ever since their first introduction as a whole in Flashpoint #4 they’ve carried that message with them: that “family is what it can be, not what it should be”. A sentiment cruelly reversed with Black Adam’s role within the story both in that the shared connection to magic makes him kin to Billy but also his origin – which revealed that he had tragically given up his real family in a violent bid for power. All of this comes into a head beautifully within the pages of Justice League #21 which touched upon all of this with the first appearance of the brand new “Marvel Family” into “New 52” continuity. For a tale about magical wizards duking it out on the streets of Philadelphia it is really some weighty stuff. 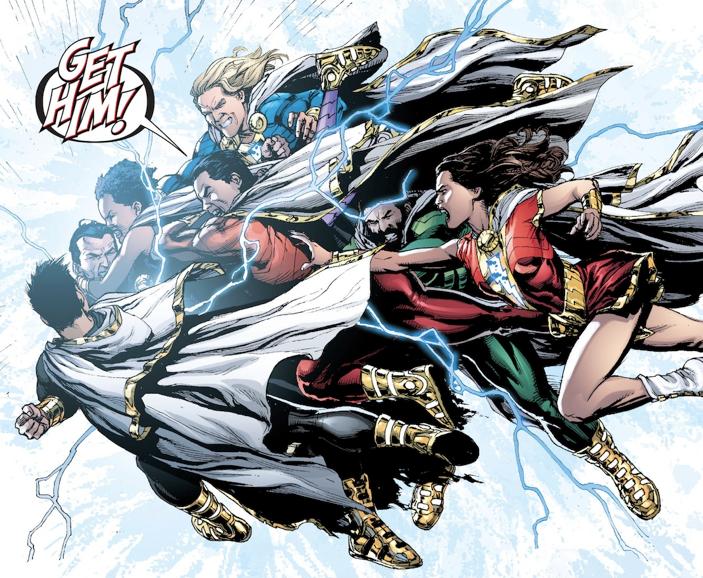 So as chapters went on and on the picture of Shazam became more and more focused. In so much that the way it was being handled came into clear view – and that it was being handled fantastically. For Geoff Johns was basically writing a movie – but not any kind of movie, a kid’s movie. In the vein of The Sandlot, The Goonies, The Monster Squad, Big and other such perennial classics this was simply the attempt at crafting a Shazam! movie. Honestly, it worked far better than I think any one could have though given Johns’ lackluster performance on the main story of Justice League. It has all the fun, the pomp, and the just plainly outrageous humorous tones and scenes that any one of those aforementioned movies had - while retaining the heart. A quality that took the series in the exact opposite direction – instead of dark it became fun. Instead of gritty, it became light. It became the entertainment amongst the “faux pathos” that was forced upon many of the other titles. To put it bluntly, there is a character that promises to “cancel Christmas” – it does not get more kid’s movie than that and it works because it’s been structured by Johns to be this way.

Sure he’s no longer “Captain Marvel”, yes he has a lot more family than he once did, so he lives in the “city of brotherly love”, and that the word “Shazam” no longer carries the same weight or works the same way it used to. Billy Batson is still Billy Batson at the end of the day and his inherent good-natured soul is the crux of this whole story from beginning to end. For all his abrasiveness we see his vulnerability not once but twice, once as a boy and another as a man, as his “greatest potential”. For all of his posturing as being uncaring, we see him think about and protect not only his new family but also the simple civilian on the street. And for all of his aggressiveness we are shown twice that he is willing to act not in violence but in peace as he tries to talk things out with Black Adam – an act that actually leads to his victory over the villain.

It had a rough start, alienated a large portion of the existing fanbase, and radically renovated the "Captain Marvel" Mythos, but in the end it rebuilt everything with aplomb and skill. Geoff Johns writes popcorn comics, it is his thing, but the difference is the amount of passion, emotion, and enthusiasm he puts into his work that sets it apart from similarly generic and formulaic comics. When Johns cares about a product then it shows, for example his original run of The Flash or JSA, and then even though it’s a simply series under his pen – it can still knock your socks off. In the end that is what Shazam! has been able to do. Billy Batson is now once again capable of holding his own series due to the amazing status quo that Geoff Johns and Gary Frank have been able to craft for him. The story not only concluded with great satisfaction in Justice League #21 but also plants seeds for greater adventures, just like any cape comic should. I’m personally going to be picking up the hardcover collection for this series that is due out in October – to show my support for the Big Red Cheese, how about you?

Please write any and all thoughts in the comments section below.