The Total War franchise spans ten years, and eight games.  The series has covers time periods and settings ranging from Ancient Greece up to the Napoleonic Era.  The next one, Shogun Total War 2 takes the series back to its roots with a Feudalistic Japanese setting.  It comes out in two weeks, and there’s a demo available right now to give you a look at what the series is all about.

After a little hands on with the demo, I’m impressed with this title; I had dismissed it as yet another a RTS game that’s not Starcraft II.  It does have many of the RTS standards, you’ll gain resources that include food and money, build and upgrade structures in a sort of tech tree (If you can call building a better rice paddy “Tech”).  However, instead of all of this occurring in Real Time, you use a turn-based system where you plan out all of the things you like to do over a “Season” then let it all happen at once.  This doesn’t make much difference in the single-player game, but it will be quite important when going multiplayer. 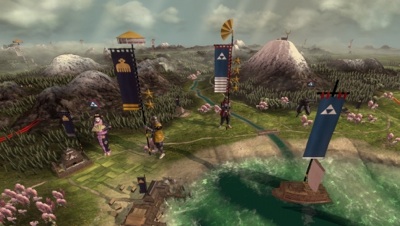 The game also has a very deep civilization-building system that might remind players of the Civ series.  Aside from building armies, you also have other matters on your hands as a Clan Leader; you deal with finance, diplomacy, trade routes and art.  You have to keep your underlings happy by not raising taxes too high, yet still providing everything an empire needs to grow.  Then there’s the matter of your clan, you keep track of your family and loyal generals in a system that follows court etiquette of 16th century Japan.  When done as a multiplayer game, this sort of political gameplay will be especially important as players can form teams, with one player in the role Clan Leader who deals out rewards to those other players who earn his favor. 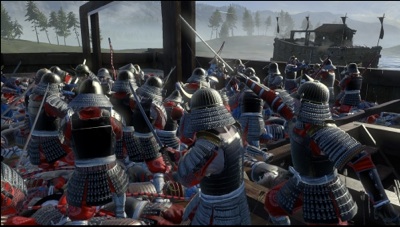 When it does come time to send your army off to battle and conquer other clans, the game gives you the option of letting it automatically decide the outcome of the battle based on various stats.  Or, if you’d rather take the hands-on approach, you can switch to a real-time view of battlefield and direct groups of troops around the field yourself.  The game uses very large numbers of soldiers (In the tens of thousands, allegedly), and you can scroll up or down to zoom out for a look at the entire battle, or zoom in to watch individual troops fighting against each other.  The graphics are quite good and it’s impressive to be able to watch a single soldier scaling a castle wall, then zoom back in a second to see the entire castle with a battle raging all around.

The combat employs a Rock Paper Scissors mentality as certain units are vulnerable to one kind of enemy, but strong against others.  Experienced RTS gamers know the drill there.  What’s unusual are the siege sequences which require players to capture castles and fortresses through a precise set of tactics like scaling walls, capturing towers and gatehouses, etc.  There is also naval combat to add in some extra distinction between Shogun and other battlefield strategy games. 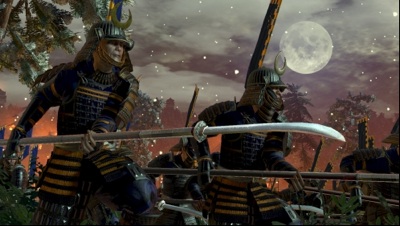 The design is full of Japanese details.  Much of the art in the menus and overworld map looks like it was drawn with a Japanese brush, and the interface often looks like it was drawn on parchment.  The various units also speak in Japanese when you issue orders, the mission goals and recommended tactics have an emphasis on Sun Tzu’s teaching (Which are quoted often in the hints and tutorial), and among your units are monks to convert enemies. All of these bits of Eastern accent make Shogun Total War 2 a treat for anyone interested in Japanese history and culture.

The gameplay is quite complex, perhaps daunting for those not already in to strategy and empire-building games, but it should definitely be on the radar of hardcore fans of these genres.  Shogun Total War 2 will be available on March 15th.  A limited edition is available with a unique ninja clan, extra missions, in-game armor, and bonus XP.  Some retailers are offering pre-order bonus as well.