By: WilsonTaylor | Xbox 360 Reviews | March 14, 2012
It's okay, guys! Mass Effect and Portal have finally concluded! We can stop pretending to be intellectuals! No more convincing old geezers like Roger Ebert that Flower was a true masterpiece and labor of love! We can stop trying to tell Jack Thompson that Rockstar's stellar writing in the Grand Theft Auto games makes all the sex and violence null and void as a cultural pollutant! We can stop lying to ourselves about Machinarium!

I kid of course, games are slowly entering a golden age of production. More and more of them seem to be diving into the beautiful and opulent pool of interactive story-telling; even dumb-fun online shooters can shed moments of brilliance (See the first Modern Warfare). But maybe it's time to say we're comfortable enough in our own medium to know that a game like Shoot Many Robots, steeped in the guiltiest of pleasures and is one Southern Belle in daisy dukes away from total decadence, is not going to set the gaming scene back a decade. With all the cards laid down on the table, let me tell you about Shoot Many Robots, a game with a title so descriptive it could only say more about the game if it was titled 'Testicle Jokes'. 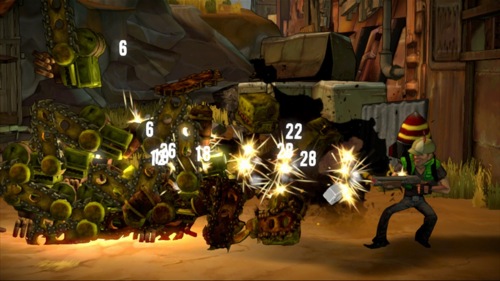 Shoot Many Robots isn't as simple as a "buy it" or "don't buy it." It is a contra-esque side-scrolling shoot 'em up basing its appeal on nifty art style, four-player co-op and dumb fun. To start off with, the dumb factor is here and smarter than anyone had anticipated. The humor comes off as a game that, rather than being a shoes-on-hands dumb game for dumb people, it's the labor of a development team who knew what they were doing and chose dumbness because it's more fun, and for that, the game is extremely laudable. It often lays down dumb jokes on the fact that lugnuts are the game's currency hence a copious amount of puns on the word 'nuts', each pun more satisfying than the next, but occasionally, the weapon descriptions or loading screen hints will lend themselves to a surprisingly subversive sense of humor.

The game is obviously going for lightness of tone, and what else would you ask of a game based around bald southern men getting together to drink and shoot robots? The game is great about keeping a consistent tone because of the ultimately excellent cohesiveness of its presentation. The light cartoony visuals keep any scene from ever being taken too seriously, but with the well designed backgrounds and dusty Arizona-esque fields and moody desert-punk basslines create another unexpected, greatly appreciated token concept, and that is atmosphere. The game can carry an atmosphere really well, whether it's dusty and blazing-hot or it's ass-kickin' time (editor's note: can change to butt-kickin', but I think ass-kickin' feels more in tune with the theme of decadence) and the guitars ramp up to crazy electric guitar solos. 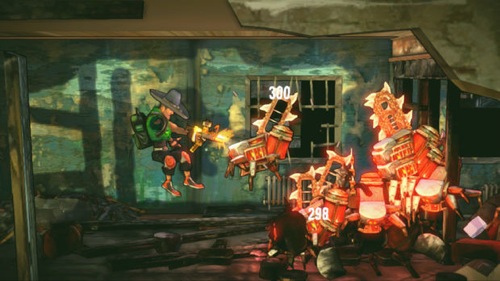 The minute-to-minute gameplay is solid and fun and rewarding. The upgrade system feels fresh and keeps players constantly switching their loadouts around. It's not too much of a stretch to say that the gameplay is self-explanatory. The moment I called the game "Contra-esque" should have cemented that, but it manages to go even deeper and understand that simplicity in a game lies in goals and obligations, not only being able to shoot one direction. The actual mechanics play it straight and every button does something, but it's never overwhelming. X is shoot, control stick to aim at many robots and most game designers with the design objective being 'simplicity' usually stop there, but no, Demiurge Studios is better than that, they don't have such a low opinion of your intelligence that they think "What more could players need?" The answer is challenge and strategy, and there's plenty of it, in subtly implemented ways.

There's the classic unlimited-ammo standard gun versus limited ammo explosive weapon conflict, plenty of movement options to best reach strategically sound places to shoot robots, a melee that does little against the robots themselves but can deflect certain bullets, so think fast, and if you're low on health, do you drink a beer and waste away a non-standard 'extra life'? Or do you attempt to wait it out and let your health regenerate, but only to about half-full? The game can and will manage to keep you on your toes. 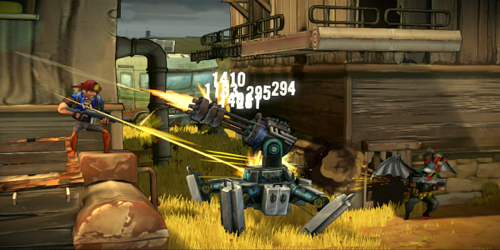 The gameplay is fun and enjoyable and it presents itself in subtly genius ways! Demiurge Studios has done good work, helping out with Mass Effect, Bioshock and Rock Band, so they know their stuff, but no one knows everything. An upgrade system is supposed to be an RPG-flavored aftertaste of accomplishment and a carrot on the end of a stick meant to pull you through the game.  The way it's supposed to begin is with a standard weapon, nothing to write home about, but leaving you anxious to see what the next gun will be. NOT a horrifically designed pea-shooter that makes shooting robots so slow and arduous that it feels like a chore. The complete lack of impact from the gun only makes it feel worse. The helpful gun tips may allude to this by the only strategic guideline for the starter weapon is "Get A Better Gun", but making a joke out of it doesn't make the beginning any less of a slog.

This ties along with the numerous gaffs in the game's progression. Aside from an annoying 'stars' system that can potentially block players off from progression entirely if they don't perform well early on, the game has an odd difficulty curve, and this isn't just in part from the upgrade system, the mechanic being a universally reliable way to let difficulty curves know who's boss and who they'll come crying back to when they're ready to apologize. Because of a lack of rising difficulty from encounter to encounter, it's impossible to know whether the next stage will be an insane, controller breaking gauntlet or a gentle breeze floating through a serene desert of cakewalks.

This has been an extremely extensive review for a game who's review of itself is summarized in three very brief, very wonderful words, but that's because the game is smarter than it lets on. It's ultimately worth the money, because it will indefinitely provide when you're ready to blow some steam off with a game and you want to blow off steam with some style, but in extraneous design, it leaves a lot to be desired.  If you take anything out of this review, however, let it be this...The game is not four player offline.

Here's to hoping that Demiurge manages to pull out some more surprises for us in the future.
Rating
7.2