Shooters You Should Play Instead of Battlefield 3: Bulletstorm

Sure, Battlefield 3: Near-Future Warfare has breathtaking graphics, great sound design and a host of gameplay improvements that make it possibly the most realistic shooting experience this side of actually joining the army and killing real insurgents.  But why would you play Battlefield 3, one of the dourest video games in existence, when you could hurl an energy leash thing at a bad guy, yank him off his feet into your boot, kicking him up into the air where you can riddle him with automatic fire before switching weapons and shooting a rocket up his backside?  Why indeed?

There are many, many reasons why you should choose Bulletstorm over Battlefield 3.  Firstly, Bulletstorm is much, much more fun.  It’s not just about shooting faceless terrorists- it’s about shooting hordes of mutated punks in the most messed-up, outrageous ways you can think of.  See that giant cactus plant thing?  Kick a guy into it and it’ll eat him, giving you a nice chunk of points.  Does Battlefield 3 have giant, man-eating cactus plants?  I think not.  The game rewards you for getting creative and coming up with as many outlandish ways to ‘Kill With Skill’ as you can- bounce foes off walls, into the air so you can juggle them with bullets, onto environmental hazards… there are literally hundreds of possible ways to kill in Bulletstorm and it’s a blast finding them all.  Unlike Battlefield 3, which just wants you to, y’know, shoot some guys.  Which is… neat, I guess. 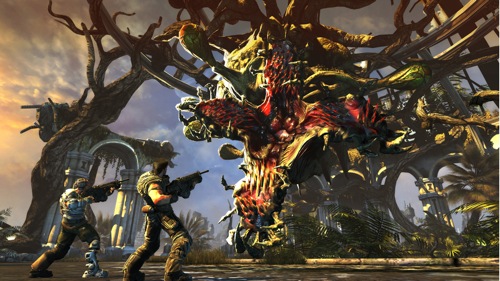 Let’s talk about guns!  Double-barrelled shotguns?  Sure, they’re great, but why stop at two barrels?  Bulletstorm has a four-barrelled shotgun called the Boneduster which can also set people on fire.  Assault rifle?  Yeah, okay, but does your Battlefield 3 assault rifle have a secondary fire mode which blasts all of an enemy’s skin off and leaves them as nothing more than a charred skeleton?  And then there’s the gun which fires explosive, bouncing cannonballs, and the Penetrator, which shoots rocket-propelled drills that literally nail bad guys to the walls.  Need I go on? 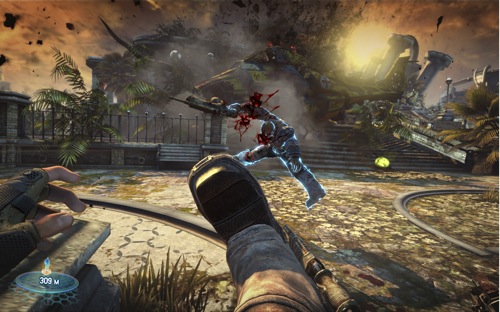 I’ll be honest, I don’t know anything about Battlefield 3’s story.  My guess is that you fight terrorists. [Editor’s note: You fight terrorists] Maybe there’s a terrorist boss who looks like R’as al Ghul from Batman: Arkham City!  Maybe he’s immortal thanks to a Lazarus Pit which gives him infinite reincarnations.  I have no idea.  Still, Bulletstorm’s story is bound to be at least six times better- instead of playing a regular army grunt or boring space marine, you’re a drunken merc called Grayson who swears constantly and has a best friend called Ishi (who’s also half-cyborg, and keeps trying to kill Grayson when his programming takes over).  And it’s all about getting revenge on possibly the most irritating bad guy in video game history, a general called Sarrano who has more personality in his little finger than the protagonists of every Call of Duty game. 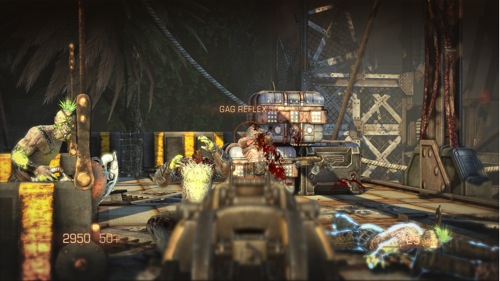 If you want a first person shooter so realistic that you actually feel like you’re about to get a bullet in your head while playing, then sure, pick up Battlefield 3.  I’ll be over here with my copy of Bulletstorm, shooting mutant punks in the testicles and having much more fun than you.

Be sure to check back tomorrow for the final installment in our series of Shooters You Should Play Instead of Battlefield 3, and take a look at our previous article on Operation Flashpoint.