Shooters You Should Play Instead of Battlefield 3: Chronicles Of Riddick

Battlefield 3 is just days away, and hardcore console gamers are lining up in front of Best Buy to grab it at its midnight launch (While their more intelligent and attractive PC counterparts are staring at the Origin website waiting for the pre-load).  But is dropping sixty bucks on launch day the best use of your gaming dollars?  Instead of scrambling to be the first to play the hottest new FPS every month, you could spend that money on several classic shooters, or overlooked recent releases.  Over the next few days, Player Affinity will recommend some great shooters that provide more fun for the same price, and might be more to your tastes than Battlefield 3.

Battlefield 3 will boast cutting-edge software, hyper-realistic military action, and some of the most anticipated multiplayer gaming of the year.  Still, there are many existing games that offer even more authentic military simulation, plus emotionally-impacting stories, and thrilling multi-player.  Today we’ll focus on a game with a spectacular single-player campaign, Chronicles of Riddick. 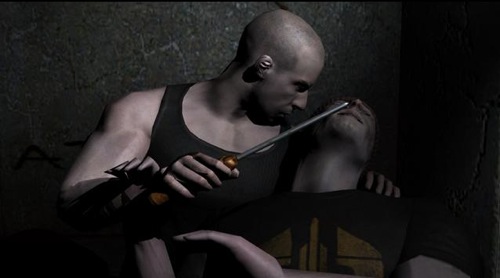 The Chronicles of Riddick: Escape From Butcher Bay sounds like a tie-in game made for a crappy movie.  And… it was.  But this is the rare case of a tie-in game exceeding all expectations.  When the movie The Chronicles of Riddick hit move theaters in 2004, it was a total embarrassment for Vin Diesel, and the film ruined an otherwise cool character.  The tie-in game Escape From Butcher Bay took a good hard look at what made Riddick such a fan favorite, and created gameplay mechanics that allowed players to know what it feels like to be Riddick.

Instead of stepping into the boots of Generic Army Guy Number 3, players could sneak around in the shoes of an iconic character and explore the events that lead up to Riddick’s first film, Pitch Black.  Butcher Bay took players through Riddick’s many adventures as he tried to break out of a prison- IN SPACE! 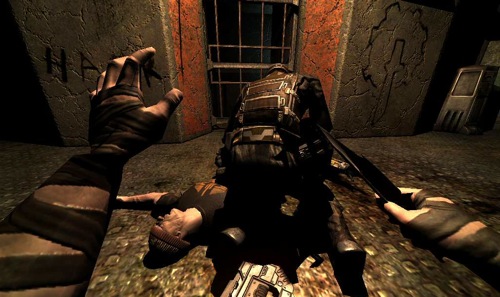 Because it was set in a prison, guns were hard to come by.  Riddick and the player controlling him had to earn them by sneak around guards, locating weapon caches, and de-activating DNA locks on the guns.  RPG-style missions popped up too as Riddick had to perform favors for other prisoners in order to get the materials needed to manage his escape.  Riddick was repeatedly re-captured and disarmed, so these various forms of gameplay were used throughout his escape.

Although there were guns, Escape From Butcher Bay also used melee weapons with excellent First Person fighting controls.  It also had stealth gamplay allowing instant kills, and it explained the origin of Riddick’s “Eyeshine” power that was seen in the movies.  This special ability that let him see in the dark gave the game a unique appearance, and still stands out among the other games that try to emulate military night vision scopes, and Infra-Red goggles.  Butcher Bay also avoided the use of a HUD to give it yet more distinctiveness.

Mostly presented from the First Person view, the game switched to third person for the sequences that involved climbing, giving players a look at the very detailed virtual Vin Diesel.  The visual design combined sci-fi elements for futuristic cryo pods in some sequences, but also depicted a space prison as being much like a third world penitentiary at the same time.

Voice work was top notch with Vin Diesel voicing his own character.  Futurama fans might wonder why some of the guards sound like Bender, and that’s because John DiMaggio did some supporting characters in Riddick before moving on to becoming the voice of Marcus Fenix in a little game called Gears of War. 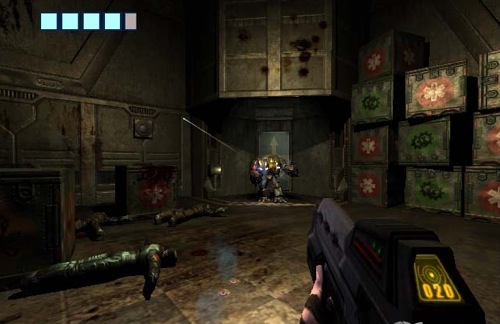 While Escape From Butcher Bay was only available for the original Xbox (Sorry, no backwards compatibility for the 360), the whole game was redone with enhanced graphics and re-released for next-gen platforms alongside its sequel Riddick: Assault On Dark Athena, which is available for Xbox 360, Playstation 3, PC and even Mac.  Butcher Bay was billed as a bonus that came with Dark Athena, but the truth is that Dark Athena is just a side-dish to the enhanced version of Butcher Bay.

Battlefield 3 is going to offer some complex multiplayer that will give countless hours of warfare to its fans, and while Assault On Dark Athena does have multiplayer, the true draw of Riddick is in the solo play and story of Butcher Bay.  Instead of worrying about stats and clan ranking, story-based shooters can keep players enthralled by identifying with the game’s protagonist, rather than raging at that sniper who’s spawn camping.

See the next installment in this series for another shooter you should play instead of Battlefield 3.