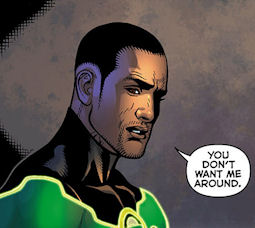 For a little while now, Green Lantern by Geoff Johns and Doug Mahnke has been taken over by a new character, Simon Baz. Hal Jordan has barely appeared since then. In fact, this is after the New 52 relaunch of Green Lantern already reduced Hal’s role in the book by giving Sinestro a co-starring role. What effect has that had? None, apparently. Green Lantern has remained one of DC’ Comics’ best-selling titles even as it has featured less and less of Hal Jordan. Sales have fluctuated as certain and issues draw in more readers, but the series continues to settle into the same sweet spot it always has. That begs a certain question.

It’s no secret that comics -- and DC Comics specifically -- have trouble with diversity. While the New 52 did at least make a half-hearted push to address this, much of those developments have fallen to the wayside since. Books like Mr. Terrific, Voodoo, Static Shock and Blue Beetle have been canceled. The new status quo for Fury of Firestorm has made Firestorm white 100% of the time. Promises that we would see Ryan Choi return as the Atom and Jackson Hyde/Kaldur’ahm as Aqualad have yet to be fulfilled. Identities like the Spectre and the Question have been returned to white characters. Brand new characters with starring roles like Talon and Jediah Caul are just more white guys. I’m not saying it’s all downhill, though. I realize that Katana and Vibe are on the verge of getting their own little pushes. But quite a few steps have been taken backward, so why not do something to make up for that by letting Simon Baz continue to star in a top tier title?

I know the what the knee-jerk reaction against this is. There would be a fan revolt. The return of H.E.A.T. to campaign for Hal Jordan’s return all over again. My counter argument? I highly doubt it. There’s no Parallax this time to force the character out in disgrace and galvanize his fans in outrage, and it’s not like H.E.A.T. ever put any real pressure on DC. Fan backlash is just not a serious concern in this case.

But the other argument is that Hal Jordan is the driving force for the current success of the Green Lantern franchise. Sure, it was his triumphant return that started it all. But I’ve always thought crediting Hal for any more than that was a serious oversimplification of things. Yes, the controversy of Hal’s return is what got so many people to check out Green Lantern: Rebirth, making it a huge success for DC. But since then, Hal himself hasn’t been much of a factor in its popularity. If you want to simplify it down to one name, that name’s Geoff Johns. He’s at the center of Green Lantern’s success; not Hal Jordan. Plus, the majority of Johns’ run has consisted of characters and concepts instead of Hal that got readers interested and excited. It was all about the rise of the Sinestro Corps, the Emotional Spectrum, the Red Lanterns, the Blue Lanterns, Larfleeze, Blackest Night, the Indigo Tribe, the return of Sinestro the Green Latern and now Simon Baz. By virtue of being the immediate successor of Abin Sur, Hal just served as a vehicle of convenience to link many of these things together. He never actually generated much of anything that had Green Lantern fandom talking. We were all in love with the likes of Sinestro and Larfleeze and speculating about power rings of various colors. The rare times Hal seemed to come up in discussion it concerned how he seemed to be little more than a supporting cast member in his own book, and that didn’t seem to hurt Green Lantern’s popularity one bit.

No offense to Hal, but he was always just there. 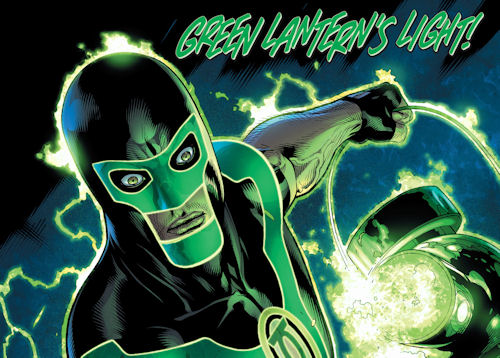 I see no reason Simon Baz couldn’t carry Green Lantern just as well as long as Johns continues as its writer. Look, I was pretty critical of how the character has debuted. I still am. Turning your new high profile Arab-American character into a suspected terrorist just isn’t cool. Neither is the costume giving him a ski-mask looking disguise. In my mind, it’s like debuting a new major black character as a suspected drug dealer or gangbanger. So Simon isn’t perfect, but I’m not going to write him off just for that.

I’m not giving Simon a free pass because of what he means for racial diversity either. Honestly, the premise of his character is just much more interesting than Hal Jordan too. Here we have a criminal who has been recruited to be both a superhero and member of intergalactic law enforcement. Sorry, but that has a lot more going for it than a test pilot. In fact, Hal’s premise has always been the weakest of all the human Green Lanterns. Being a test pilot has little relevance to the Green Lantern Corps compared to a criminal, a former cop, an architect/Marine and an artist.

The New 52 was supposed to recreate the DC Universe as something more modern, relevant and diverse. It didn’t really do much in that regard. It actually seemed to put more effort into securing the positions of many of its straight, white male characters. From Hal Jordan to Ronnie Raymond all of the way down to Jim Corrigan, DC’s New 52 has largely stuck by the white guy even with readily available alternatives at their disposal. Now with Simon Baz, DC has the opportunity to actually make the kind of bold move promised to use when the New 52 began.

Hal Jordan has done the job that needed doing. He helped Geoff Johns string together a mythology that has made Green Lantern a franchise second in popularity only to Batman at DC Comics. Now, his greatest contribution could be to step aside and let Green Lantern fully evolve into the 21st century. There’s no need to Parallax him again. Give Hal Jordan the heroic and respectful send-off he deserves.

It’s not like we don’t already know that Green Lantern can survive without him.