Have you ever thought, “What on earth were the writers thinking?” Well, thanks to a little medium called Twitter, you can ask them yourselves. And, surprisingly, a lot of them reply back. It’s one of the wonders of the 21st century—allowing fans to interact with writers and vice versa. While there is typically a lot of noise from fans who are displeased with how a show develops, showrunners keep their heads held high. If you fancy people tweeting how they write all day with humor and grace, the following showrunners definitely deserve your attention:

@julieplec
One of the creative masterminds behind The Vampire Diaries, Julie Plec has a lot of passionate teenage girls to deal with on a daily basis. Whether they are angry because of a breakup or they simply just want to vent, Plec handles it with pride and patience. Meanwhile, she light heartedly complains about her writing efforts for the show while expressing her love for the cast and crew.

@billprady
You’d expect the showrunner of a show like The Big Bang Theory to be funny and smart. Fortunately, Bill Prady is both, and remarkably down to Earth. As he navigates his way through the season, he has accurately responded to false accusations of the show not having a live audience (he has pictures up), he complains about broken technology and waiting for basketball season and he even shares some ideas he has for future episodes. No arrogant bragging about being America’s number one comedy, Prady is just a talented guy running a show.

@damonlindelof
While he isn’t technically running a show right now, David Lindelof’s work on Lost gives him reason to be an interesting showrunner to follow. Lindelof is funny, original and very edgy. He makes as much fun of the people who hate him for the way Lost ended as he does of himself. He also only shares links that are actually interesting, varying from Japanese animation to awesome Lost fan art. Plus, he often professes his love for Community, and that doesn’t hurt.

@stevenlilien
If you are a big Alcatraz fan, you should definitely follow Steven Lilien. As one of the creators of the show, he often does what his colleagues won’t—he searches for fans and reacts to them. It often results in shameless self-promotion, but with his dry wit and mockery, it’s perfectly acceptable.

@happywrites
Often, the writers of Happy Endings promote their recently launched webisodes and episode airings, but they also take the time to contact their fans. They take shifts, allowing fans to talk to most of the show’s writers. They also occasionally host Twitter-chats, where they answer any reply they get. If the wit and randomness with which they tweet isn’t enough to make you watch the show, their dedication and politeness surely will. 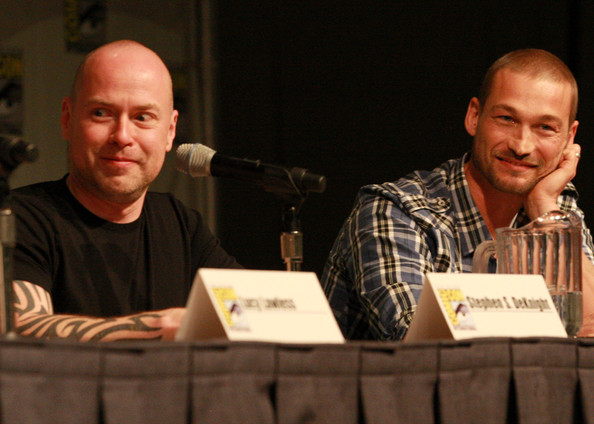 @stevendeknight
Talk about dedication—Spartacus creator Steven DeKnight literally answers every reply he gets…all day long. Though it won’t show up in your feed, it’s certainly worth checking out, as he answers questions about the show, production and his personal life. He also favors fan art and Once Upon A Time.

Those were our top choices for now. Did we miss anyone? Do you interact with showrunners on Twitter, or do you prefer to stay silent?