By: | PC News | August 9, 2011
The Elder Scrolls V: Skyrim has received a great amount of praise after Bethesda showed that impressive demo back at E3, and many people have most likely pre-ordered it already. However, the hardcore fans may want to hold off on pre-ordering the normal game, as Bethesda has just announced a Collector's Edition for Skyrim.
The collector's edition of The Elder Scrolls V: Skyrim will include a 12-inch PVC statue of a dragon, known in the game as the World Eater. It will also pack-in a 200-page long art book titled "Art of Skyrim", with a foreword from Bethesda's design director, Todd Howard. Last, but definitely not least, the collector's edition will include a making-of DVD. This video is shot in the style of a documentary, and goes from the beginning concepts of Skyrim to the end of development with behind the scenes footage of the game. There will also be a few interviews with Bethesda developers. The whole package will cost $150, and will be available in North America, Australia, and the United Kingdom in extremely limited quantities. 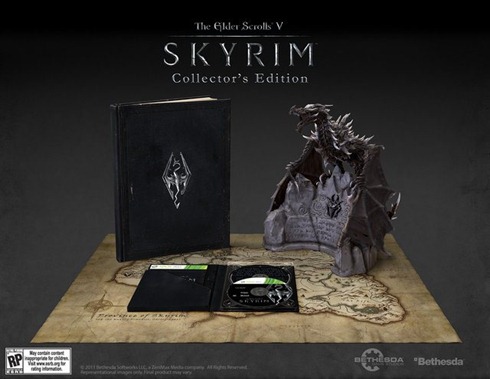