Lois knows Kung Fu, Clark can fly, and Chloe returns. Smallville returns after one of the longest hiatuses ever, only to return with one of the blandest, boring Matrix “homages” in recent history. I love Smallville, I’m glad its back but this was a serious disappointment. This episode took the things that people that don’t watch the show, criticise it for and put all of them into an episode. Chloe deserved a much better homecoming.

The episode picks up shortly after the attack at the funeral for Hawkman. Clark and the rest of the League (even though we only see Oliver and Black Cannary) are told by Chloe that they are trapped in the Matrix VRA cyber space and the only way to escape is to take a leap of faith into a portal and the only way to reach it is to take a leap off of the daily planet rooftop. Chloe stated that she can’t control where the portal shows up, but I can guarantee you the moronic writer of the episode could.

One thing that really got under my skin is how quickly Cannary and Clark were to distrust Chloe. I know she left suddenly, but she and Clark have known each other since they were 13. Take a leap of faith you red and blue jackass! And Cannary was just being a total bitch with no good reason. She said she didn’t trust Chloe, but she didn’t even feel the need to ask questions, just punch Chloe and hope that helps somehow. I was hoping that the fight scene between the two would be entertaining, but it was the most awkward fight we’ve ever seen on the show. I was looking for the tattoo on Chloe’s white suit that said “BODY DOUBLE!” 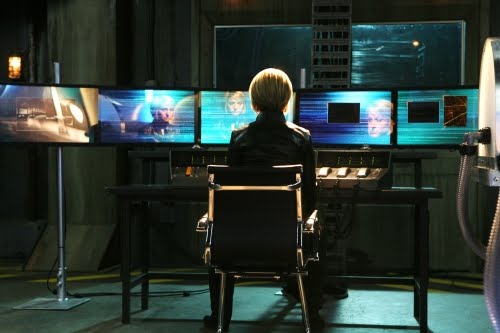 I was happy to see Chloe again. If you’re a fan of the show, you know that one of Chloe’s best traits is her snappy dialogue. With this episode, it just feels like the writers wanted to make the dialogue awesome, but it was clunky, forced, full of bird puns when it came to Black Cannary and was so full of exposition I can’t believe she just didn’t turn to the camera and tell us directly what was going on. Her sudden alliance with the Suicide Squad is something I have hope for, but I can’t really bite into it.  The Suicide Squad generally don’t play well with others, and I don’t see Rick Flag being the Justice League’s lackey for very long.

Yes, Clark flew and it was a disappointing scene. I was giddy for a few seconds, then I reminded myself that this is in cyber space and that he can’t do it in real life. This does raise the question as to why they can’t replicate it in the real world or why he chose this moment to fly upwards when their goal was downward. That and the effects were laughable. When Clark runs, he leaves behinds a believable looking blur. In this, they gave it the effect of a jet engine that was colored blur despite the fact he was wearing black trousers. The engine effect was so bad and out of place, it seemed more like Clark was having an acid trip instead of actually flying (I wish I was on acid watching this). The green/blue screen effect was also bad. It was way too obvious that Tom and Erica were laying on blocks, but if you look at Tom’s feet, he’s kicking them like he’s swimming. Were they supposed to swim to safety and when they changed the script it was out of the budget to re-shoot it? Smallville hasn’t had the best effects in the industry but goddamn! And speaking of bad effects, there is a moment when Chloe walks through a wall, and it looks like an effect I did in adobe after-effects.

Overall, the episode was a real bust. Chloe’s return was a whimper, the characters are poorly written, the scenes that should be badass just make you laugh and they still haven’t delved deeply enough into the Darksied stuff. Things need to pick up fast to save Smallville’s final season.