Smurfs, Cowboys and Aliens Call it a Draw at the Box Office

Who would have thought that The Smurfs would offer serious competition to Cowboys & Aliens? Yet those silly little blue cartoons managed to open at a projected tie of $36.2 million with Jon Favreau’s genre experiment. Neither film was well-received by critics, but that didn’t stop the masses from turning out to the theaters for a lackluster summer weekend. The Smurfs led on Friday, but trailed on Saturday. Both studios project similar for Sunday, hence the dead-even estimates.

Friends with Benefits launched with $18.5 million last weekend while Crazy, Stupid, Love opened at $19.3 million this week. Romantic comedies are still not the box-office draw studios act like they are, but they open at consistent numbers with quite small budgets. Your Player Affinity hosts of The Plot Hole movie podcast discuss their opinions of this rom-com and Cowboys & Aliens on Episode 17 (see www.playeraffinity.com/podcast every Tuesday night).

Captain America made $3 million more than Harry Potter and the Deathly Hallows Part 2, but it was “Harry” that broke another record. The last installment crossed $900 million in 15 days; that’s three days faster than Avatar. As of Sunday it has made $1 billion. 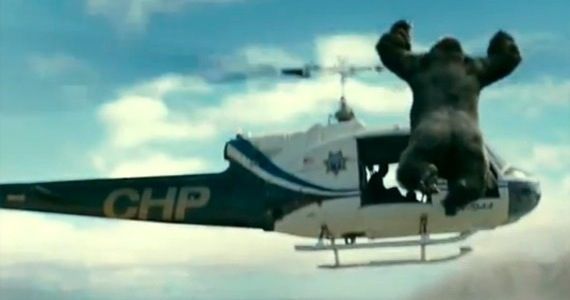 The last big movie of the summer opens this Friday. No, I’m not talking about Conan the Barbarian (that opens a bit later); it is time for Rise of the Planet of the Apes. The angry monkeys grace 3,500 theaters next weekend. August releases are the least attended of the summer; the level of taste and quality depletes during the month as Labor Day draws nigh. However, The Bourne Ultimatum revitalized the first weekend in August in 2007 with a record $69.2 million in its opening. The release window is the last viable one of the summer and wild monkeys have it on lock.

That does not mean that the counter-programming won’t have its day and dollars. The Change-Up, a body-switching-trading-places sort of comedy starring Ryan Reynolds, also opens at 2,700 locations. It will likely be smashed by the simians but by how much? Make your prediction on Box Office Wizard every Friday right here on Player Affinity.