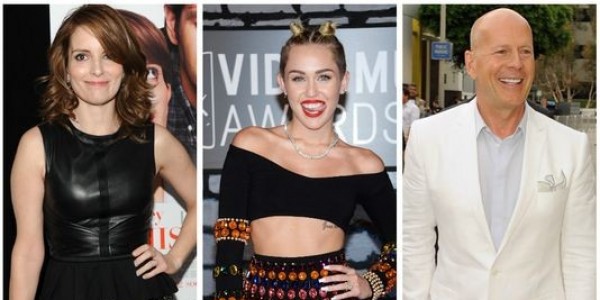 The first three Saturday Night Live hosts of the season have been announced and there is something in the lineup to please everyone. Tina Fey, free from her regular 30 Rock gig (we miss you Liz Lemon!) will kick off the season as the first host of the series’ 39th year. Fey has been one of the most successful hosts of the past seasons; certainly her time as Saturday Night Live’s head writer and regular Weekend Update host has helped to facilitate her hosting abilities. She's also a comedy genius, so there’s that. Comedy fans, especially those suffering from the loss of 30 Rock, will surely be pleased with Fey’s participation. The musical guest accompanying Fey in the premiere will be Arcade Fire.

To the delight of many a teenage boy and pop music fan alike, Miley Cyrus will be taking her twerking, tongue-wagging self over to Studio 8H and pull double duty as both hostess and musical guest on October 5th. Following her much talked about performance on the MTV Video Music Awards, Cyrus will no doubt aim to keep the buzz going. Hopefully some funny material can come out of the effort; Cyrus does seem able to take a joke and have a sense of humor about herself. I mean, she wears teddy bear corsets for god’s sake. And finally, on October 12th, Bruce Willis will take on hosting duties for the second time in his career, and Katy Perry will be the musical guest. Who are you looking forward to watching?