The online shopping addiction and social media frenzy continues as they combine forces. Twitter is pleased to announce a partnership with the corporation juggernaut, American Express. This week they announced that the two companies plan to make a line of online payment through Twitter hashtags which may be the easiest route taken. Welcome social media-e-commerce? It sounds weird to the ear and shopping through social portals such as twitter may feel even more foreign.

American Express customers who have an account can set up a sort of sync with their bank account and their Twitter handle. They will be able to buy products by tweeting from the appropriate hashtag from their account to American Express. When customers perform this first step, American Express will return a confirmation to the tweeting customer, asking to confirm the original hashtag tweet. Then the cardholder will be charged and the product is shipped to the customer’s address which they have previously established. 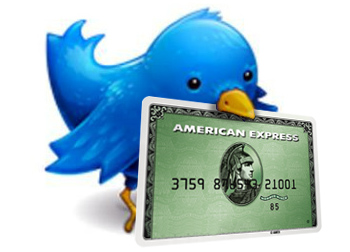 From a Consumer's Point of View

Quite frankly, I think that the simplicity is amazing yet dangerous. If we look at the situation logically, social media sites are leaders of the World Wide Web in hacked platforms. There are intrusions every day so why would we, as customers, hide our money in a safe without a lock? Yes, it’s easier, but online currency follows a certain protocol for a reason, to ensure safety of funds to the best of its ability. The confirmation of these tweets may not be enough to protect the funds of American Express’ loyal customers.

This represents a large jump in online shopping and the first recognizable time consumers can purchase items in a direct sense through popular social media. User’s purchases also become public which may strike another problem. Consumers like privacy, people like privacy, are we ready to have our past purchases open to anyone we follow or follows us?

We are yet to see what will come of this method of social media purchases. The idea is dangerously customer friendly and the practicality is a bit bizarre being that these companies don’t seem to be conscious of people’s wants as a person rather than consumer. Let us know how you feel, let the people speak!