By: Justin Moody | Comic Reviews | February 4, 2011
The newest story arc of Soldier Zero is among us! With only having a quick breather from the first story arc, Soldier Zero is coming at the readers with a bigger and better story arc! Code Icarus takes off where the last story arc ended with Soldier Zero/Stuart murdering a cop? What could this possibly mean for our heroes? Nothing but trouble! As more Soldier One units have been dispensed to the Earth and Soldier Zero on the run a new threat gets added into the mix of things. With the suspense just itching you to read the rest of the review, join Stan Lee, Dan Abnett, Andy Lanning, and Javier Pina on the 5th issue of Soldier Zero.

The beginning of this issue opens up with a report on the cop that was seemingly killed by Zero and Stuart. While Soldier One killed the cop and either of our heroes who are just taking the heat. While the news announces the continued search for Zero an android/alien named “Application Nine” has assembled itself in the hospital’s M.R.I. Also in the hospital, Stuart and James have a talk about James’ shot-off arm. Before Stuart went in the room a guard that had orders not to let anyone in greeted him. When the guard mentioned his “orders,” he asked about Stuart’s injury – the Afghanistan attack that rendered Stuart disabled made the guard have pity on him and let him in. Having only said a couple of words in a single panel really showed the emotion of both Stuart and the guard during the talk. A rare thing that you can see between characters who seem to know what kind of pain Stuart would be in. 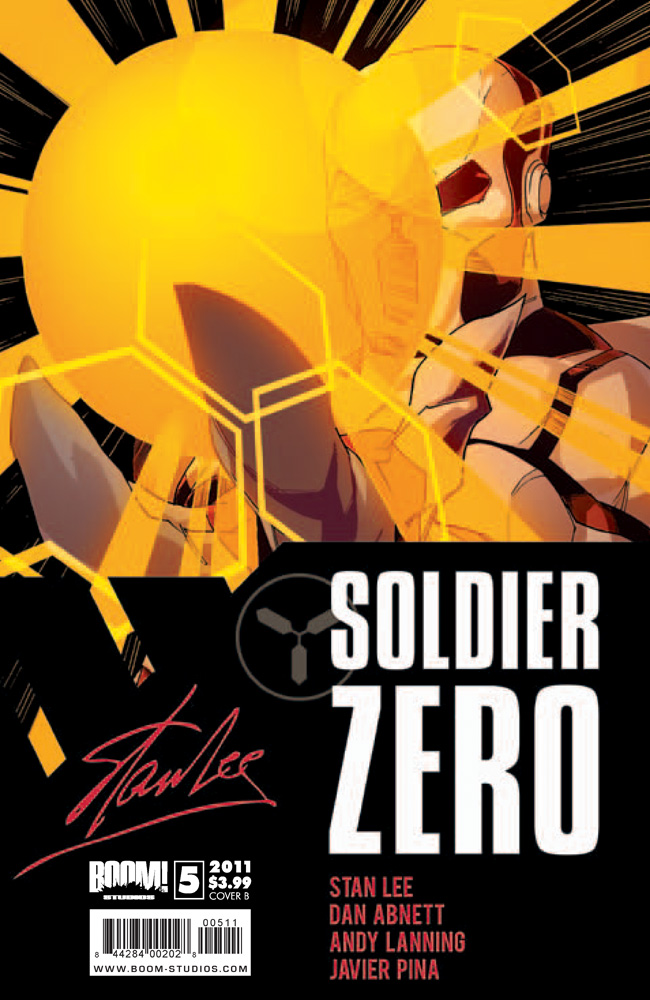 As the story unravels, James gets extremely desperate to have his missing left arm back. Even going to the extent of trying to get Stuart’s Zero hybrid, the emotion between the two brothers shows future events to come. The Application Nine attacks Zero and eventually decides to do some dissecting on the heroes! Concerning James, I think if he gets desperate enough he will join the Soldier Ones. It usually seems to me that when a character (like James) looses something they usually turn evil. Stuart is not going to give his hybrid up, but James is crazy enough to do something drastic. So whatever Stan’s team does in the future with James, I think this is one of the choices.

Dan Abnett and Andy Lanning are the new writing team for this story arc. Their writing really captures the characters' emotions and gives little Easter eggs along the way. Abnet and Lanning are doing a great job on this new arc, adding new characters and future events that would work perfectly into a tie-in with Starborn and The Traveler. Javier Pina are doing a great job with artwork. It is cool to see the drawings and face expressions on Stuart. While it does seem to be off at times, it is good to see that the artwork has remained consistent.