Microsoft has recently decided to start re-releasing old Dreamcast games on Xbox Live Marketplace. This is an idea that intrigued quite a bit of people (including me), and the first game released, Sonic Adventure, is here. I was fairly excited to dive back into this old game that I once thought was a “classic.” How well does it hold up 10 years later?

Sonic Adventure is about you, Sonic, running through random, ridiculous stages and gaining chaos emeralds which will fight off Mr. Robotnik (Or Eggman if you’re a crazy guy). The story isn’t well explained whatsoever, I have no idea what a chaos emerald actually is or how it randomly turns Robotnik’s goo monster into mega goo monster. Even if they did explain it, it would be impossible to even care about these horrid characters that have absolutely abysmal voice work. 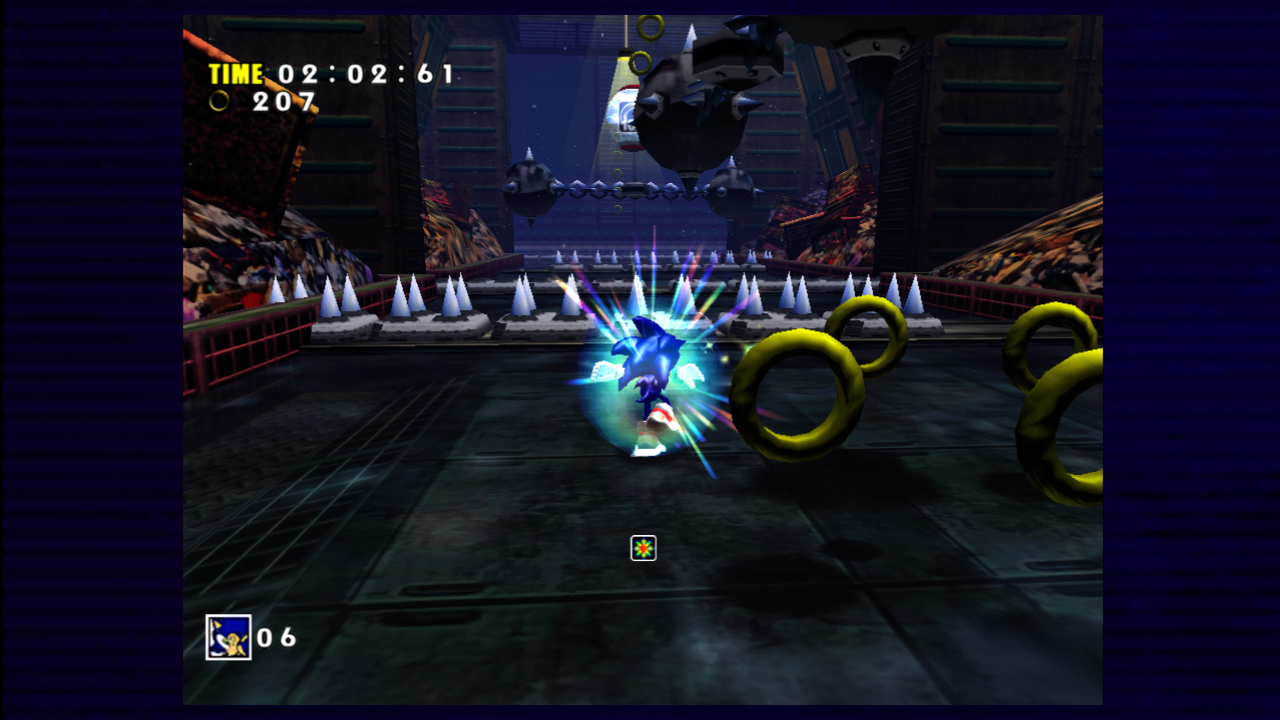 Every character in Sonic Adventure delivers their lines in such an awkward way, you wonder how they even approved these voice actors or the writing for that matter. It seems like it was written by an 8 year-old. Sonic and friends try their best to sound “edgy” but fail so miserably, you can’t help but constantly burst out into spontaneous laughter.

Level design is not this games strong suit (nothing is Sonic Adventure’s strong suit). The look of the levels can be decent, showing an odd randomness that was unseen back in that time. Apart from that, it’s all bad. The thing about Sonic that is most fun is running at a high speed and constantly staying at said high speed, that’s something you never get in Sonic Adventure. Sonic will start moving quickly every once in a while, then out of the blue, slightly touch a wall and completely halt his movement. Most of the time, you’re actually not even hitting the wall, you’re about a foot away from it, but Sonic stops anyway. Gameplay in Sonic Adventure is just bland as possible, and the rest of the game only hurts it more. The act of running in a tight corridor and most of the time being halted for no reason is as frustrating and stupid as it sounds.

On top of all this, you never have a real idea of what to do. You have to run around a few near empty areas, exploring every inch of them multiple times. The most frustrating part is it’s intentional. Sonic will act like he knows what to do, for example saying “I bet I have to use this card on that door,” though they never explain “that door.” Situations like this appear multiple times throughout the game.

The controls are quite close to the rest of the game in terms of quality. Moving around in the open-world feels incredibly clunky. How you screw up a game that features around 3 controls is beyond me. Sonic never moves with any sort of grace and more just stumbles about the city, never picking up any real speed. Jumping is controlled simply by pressing A, and whilst you’re in the air, you can dash towards an enemy by hitting A again. This is an interesting idea but it’s executed poorly as it makes the boss battles way too easy and when you use it on other enemies, it feels like a crap shoot on whether or not it will actually hit the part of the enemy it’s supposed to.

The disaster that is the camera doesn’t do Sonic Adventure any favors. Out of all the atrocities Sonic Adventure brings to the table, this is the biggest one. There wasn’t a level I went through where the camera didn’t spaz out on me in various ways. Whether it is the entire camera turning black for no real reason or if it’s the camera getting stuck in a wall while you’re running, I’ve seen it all; multiple times. You can slightly move the camera when you’re not moving by rotating the right stick around but even that doesn’t work sometimes. When it does, it’s no help. No matter what, once you make that next step, the camera resets back to its horrendous original place. I couldn’t even count the number of times I found myself running at the screen thinking “I have no idea where I’m going.”

Sonic Adventure is terrible and just plain unbearable. It shouldn’t be played or even looked at by anyone. It brings a decent idea to the table then shoots it in directly in the head. If this is what all the Dreamcast ported games are going to be like, Microsoft is better off just stopping now.